Hezbollah leader Hassan Nasrallah and his allies brought down Prime Minister Saad al-Hariri earlier this month, plunging the country into crisis in a dispute over indictments by a United Nations-backed tribunal investigating the 2005 killing of Rafik al-Hariri, the premier's father.

The rise of Hezbollah, backed by Iran and Syria, has boosted the influence of those two countries in Lebanon's government. Hezbollah's military branch is considered better-armed and trained then the Lebanese army.

Israel has said it would not tolerate a Lebanese government led by Hezbollah. Mikati has pledged to create a government of national unity but if he fails, he could destroy the delicate balance of sectarian power in Lebanon.

German newspaper commentators say Hezbollah's rise to power could spark civil war in Lebanon and trigger a new conflict with Israel, and that the international community should consider imposing sanctions to ensure that the tribunal continues its work.

"Hope and depression often lie side by side in the Middle East. While Tunisians are celebrating their 'Jasmine Revolution,' and are looking to the future with optimism, another popular uprising is being reversed. In Lebanon, the assassination of Prime Minister Rafik Hariri in 2005 triggered the 'Cedar Revolution' that drove Syria out of the country and pushed Hezbollah to the periphery. Both are back now. The terrorist organization with a political division attached has pushed through its man for the office of prime minister. The billionaire Najib Mikati is known for his good contacts with Damascus."

"Installing Mikati is an act of desperation by Hezbollah to prevent two of its security personnel from being charged with the murder of Hariri before the international Lebanon tribunal."

"This is a disaster for Lebanon. If Hezbollah becomes the dominant force in the government, it will find it even easier than before to infiltrate all parts of government including the army. And it means Iran's influence beyond Israel's northern border will continue to grow."

"Once again, the pro-Western forces in Lebanon have suffered a decisive defeat. That makes it all the more important that the Lebanon tribunal continues its work. If Lebanon's elites don't resist Hezbollah's ultimatums, the international community must do so at least. Hezbollah and Syria thought in 2005 they could murder the Lebanese premier without paying a political price for it. Their gambit must not be allowed to pay off."

"The new premier could withdraw Lebanon's support from the tribunal. Without the Lebanese, the tribunal wouldn't be worth much. Former government leader Saad Hariri would never have snubbed the international court -- Rafik al-Hariri, murdered in 2005, was his father.

"With Mitaki as premier, Hezbollah could weaken the tribunal. But the Shiite party must also give the impression that all Lebanese parties support the decision so that it looks like a 'government of national unity.' If ousted Sunni prime minister Hariri and his Christian allies refuse the offers of a coalition, Hezbollah will have a problem. It is no longer the behind-the-scenes power, it now carries full responsibility as the party of government and could threaten the unity of the state with its actions. This is dangerous for Lebanon. Israel will take the view that its neighbor is being ruled by a terrorist organization, and that Lebanon is the westernmost outpost of the Iranians. That could trigger a new Israel-Lebanese war."

"Despite his reputation as a technocrat, Mikati won't be able to cooperate with the Hariri tribunal against the will of Hezbollah leader Hassan Nasrallah. But the tribunal must carry on its work and use its leverage -- if necessary, by imposing UN sanctions against Lebanon. That won't calm the situation. There could be new violence. But if Nasrallah were branded as responsible for the murder of a popular Arab leader, that could break his spell -- and to unmask him: as a man who takes orders from Iran, and who is holding Lebanon hostage with his threats." 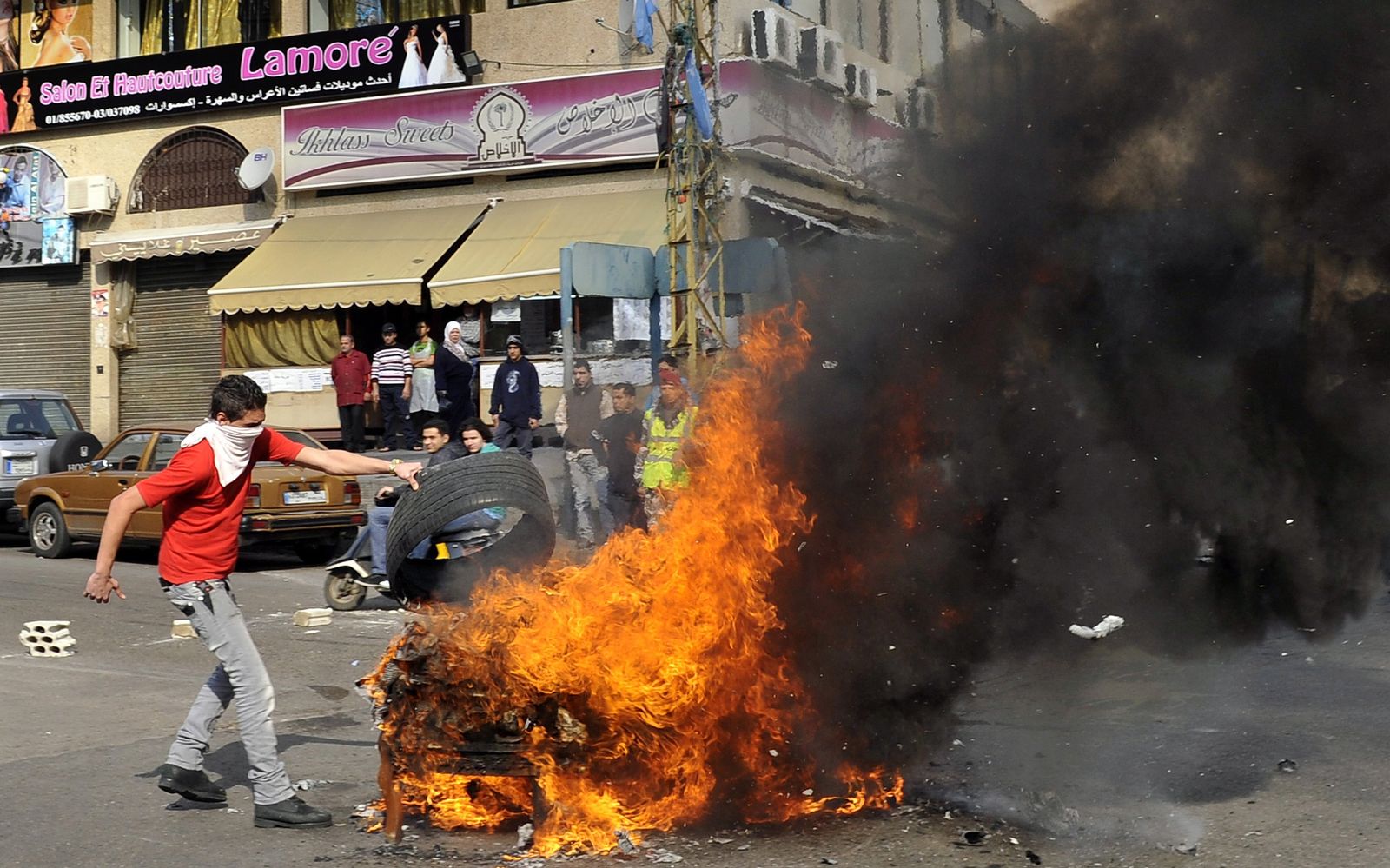 A Sunni protester burns tires in Beirut's Tarik al-Jdide area on Tuesday, a nationwide "day of anger" in protest at the nomination of Hezbollah's candidate for prime minister.