The White House will on Thursday release an unclassified version of a report into intelligence failures relating to anti-terror watch lists, after security services failed to detect an abortive attack on an airliner on Christmas Day.

White House spokesman Robert Gibbs said sections of the report will be released after President Barack Obama receives a classified version of the data from John Brennan, his leading anti-terror expert.

"I think you'll see tomorrow that this is a failure that touches across the full waterfront of our intelligence agencies," Gibbs said, adding that Obama would make a public statement after he has seen the report.

A jury in Michigan on Wednesday indicted Nigerian Umar Farouk Abdulmutallab, 23, on six counts for his bid to bomb the Northwest Airlines flight from Amsterdam to Detroit. The failed plot has raised a number of questions about the effectiveness of US security and intelligence. It has also put Obama firmly on the defensive.

On Tuesday, Obama said that the review into the terrorist watch listing system had revealed "human and systemic failures." He said it showed that US intelligence agencies missed a series of alerts related to Abdulmutallab. The terror suspect was known to have extremist links, but was still able to board the plane. In addition, Obama has said that US intelligence agencies were aware that the al-Qaeda in the Arabian Peninsula terror group aimed to attack targets in the United States over the holidays.

Earlier this week, the US president summoned members of the security services to the White House and voiced his anger over their shortcomings. "The bottom line is this: The US government had sufficient information to have uncovered this plot and potentially disrupt the Christmas Day attack, but our intelligence community failed to connect those dots," he said. "This was not a failure to collect intelligence, it was a failure to integrate and understand the intelligence that we already had."

But German editorialists on Thursday asked whether Obama was too tardy in his reaction to the security debacle. Meanwhile, disconcerting parallels were drawn between his response to the attempted attack and the War on Terror conducted by his predecessor. The point was drummed home by the front page of the left-wing Tageszeitung which displayed a photoshopped image of Obama merged with George W. Bush alongside the question: "How much Bush is there in Obama?"

"This was new to American audiences: Obama publically summoned senior intelligence personnel to the White House and the language he used to castigate the authorities' 'near-disastrous' failure, which almost caused a catastrophe on Christmas Day, left nothing to the imagination. It gives a measure of the extent of the President's wrath -- and the political damage."

"This foiled assassination attempt will have consequences beyond the authorities' pledges to improve their act. The issue of security and terror has been returned to the top of the Americans' list of concerns. Of course the Republicans try to use the issue against him. Whether he likes it or not, Obama finds himself in the position of a terror fighter who, within his own parameters, is continuing the work started by his predecessor. His colleagues are already using a term which the government has banned: The war on terror. Is Obama a 'Bush Light'?"

"The images speak for themselves: Nearly a year after taking office, Obama has now become an anti-terrorist president. His spokesman Robert Gibbs already speaks of the 'War on Terror,' as if George W. Bush were still in power. This speech leaves no doubt as to Obama's determination. It aims to counteract the impression that he was not tough enough in the fight against the enemy. The only question which remains is whether his statement comes too late."

"This has given political fodder to opponents, especially those who had already slammed Obama as a half-hearted anti-terrorist fighter during the presidential campaign. The president sent out his men to redress the balance. But they became entangled in the task at hand. As it became clear that US security authorities had made mistakes, Homeland Security Secretary Janet Napolitano still insisted that the system had worked. Soon after, she was forced to retract her statement."

"Obama now must shake off this impression of mismanagement. To this end, he opted for sharp words during his appearance following the security summit at the White House."

"Barack Obama has never -- not even during his electoral campaign -- made a secret of the fact that he does not rule out war as a political tool. Otherwise he would not have been elected. Those in Europe who believed that his statement wasn't serious, and was accompanied by a knowing wink towards the pacifists, only have themselves to blame. Military strength and the willingness to use it, are fundamental in the United States, which has not had territorial wars since the mid-19th century."

"You don't have to like it, but ignoring this global political reality ... reveals naivety. Whoever saw Obama as a prince of peace has made a mistake. He is a rational military commander. But at least he is rational, and honest -- at least as far as we have seen so far. Both of these traits set him apart from his predecessor."

"All of a sudden President Barack Obama has presented himself as a determined fighter of terrorism. But he is not saying how he wants to eliminate the deficiencies in the intelligence and security services. Following the crisis meeting on security policy in the White House, one thing is clear: There is no single solution, but there is a realization that the intelligence system is being hampered by its own organization."

"Obama has avoided dealing with the anti-terrorist theme for a year. Now it has caught up with him. Obama is facing the same issues as George W. Bush. But he has not come up with any new answers than those of his predecessor. He hasn't even got rid of the ugly legacy of Guantanamo."

"Obama will only manage to restore confidence in the safety of the country if he succeeds in presenting a concept that is both efficient and lean. That is not an easy task given that the heads of the intelligence services often like to spend more time arguing than organizing the defense of their country. Following the recent debacle, Obama must realize that, alongside all his other problems, he now has a new issue to deal with -- and urgently." 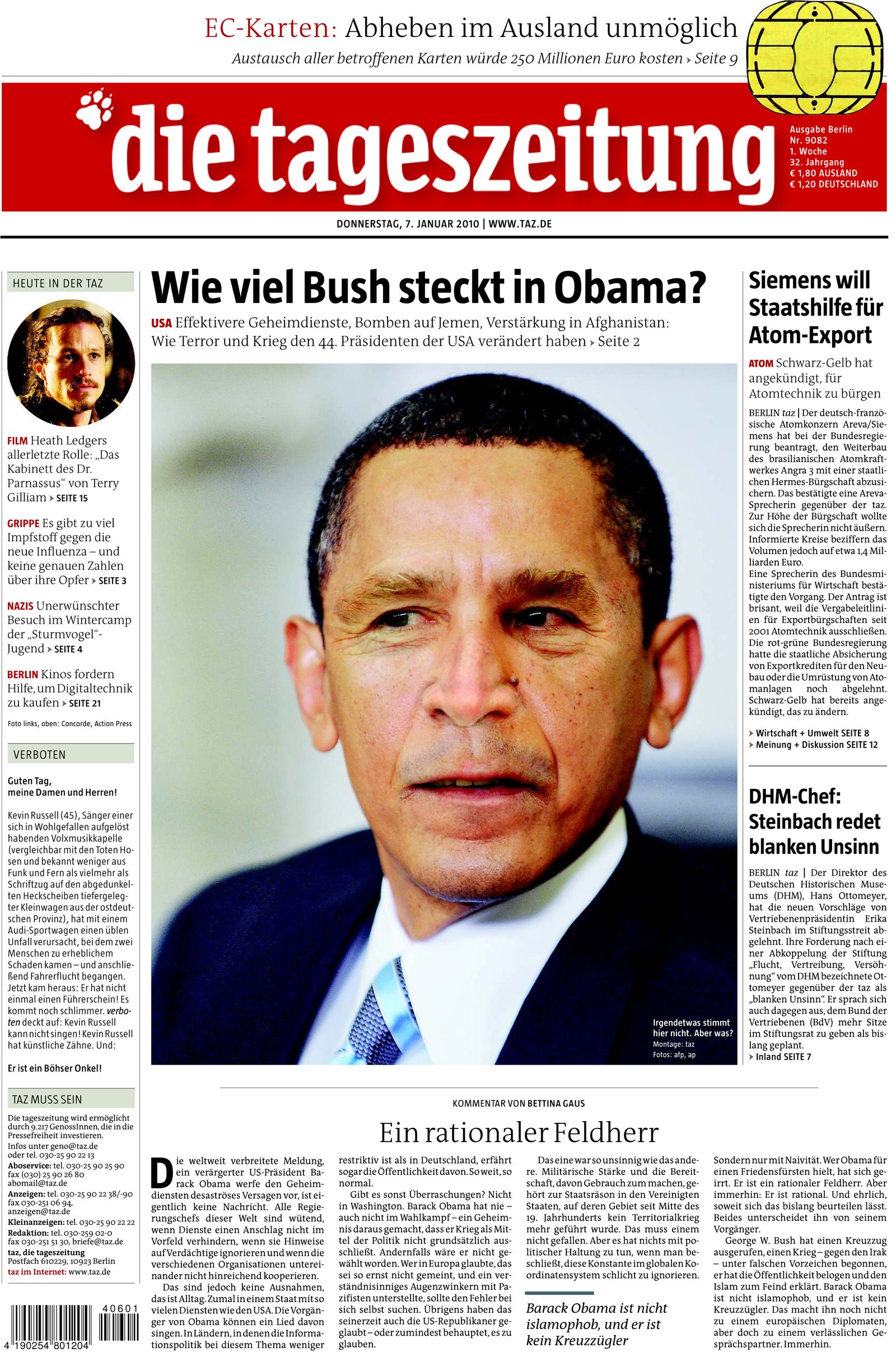