Sept. 23 could prove to be a fateful day. That is when the Palestinians want to submit a petition seeking membership status with the United Nations Security Council in New York. That, at least, is what Palestinian Foreign Minister Riad Maliki told reporters on Thursday. Does this mean an end to weeks of speculation over whether the Palestinians would seek to unilaterally declare independence from Israel?

So far, the Palestinians have not made clear statements on whether or not President Mahmoud Abbas would submit his bid for statehood to the Security Council or to the General Assembly. It has been obvious for weeks now that the Palestinians would not succeed in getting their petition to be recognized as an independent state and member of the UN through the Security Council, where United States President Barack Obama has said his country would exercise its veto power.

For some time, it looked as though Abbas would instead opt to take his case before the General Assembly, where the Palestinians could expect a comfortable majority. Still, a "yes" vote in the General Assembly would mean neither statehood nor UN membership for Ramallah. At best, the plenary could declare the West Bank, the Gaza Strip and East Jerusalem to be a "non-member state."

It would nevertheless be a victory, though, because the Palestinian Territories could at least carry the term "state" -- a detail with great symbolic value. It would also provide the government in Ramallah with the so-called "Vatican Status," which would provide it with greater legal powers than it has enjoyed so far. The new status would enable the Palestinians, for example, to sue Israel at the International Criminal Court in The Hague. That's one reason Israel is putting a massive effort into trying to prevent Abbas from taking the dramatic step. With the Palestinian president now appearing closer to pursuing his strategy at the Security Council, Israel is stepping up its preventative measures.

So far the Israeli government has deployed a carrot and stick approach in its response to the Palestinian plans. Israeli Foreign Minister Avigdor Liberman warned earlier this week of "harsh and grave consequences" if the Palestinians apply for statehood at the UN. Meanwhile, his deputy Danny Ayalon told Israeli radio on Thursday: "If the Palestinians independently take blunt unilateral steps to declare statehood, then all agreements are nullified." In recent weeks there has been speculation that the Israelis could withhold the Palestinians' share of customs revenues as one possible sanction.

In recent days, however, Israeli Prime Minister Benjamin Netanyahu, who will travel to the UN next week, has also indicated he might be willing to compromise. The Israeli daily Yediot Ahronot reported earlier this week that Netanyahu would be prepared to return to the negotiating table for a peace settlement if the Palestinians abandoned their UN plans.

The unilateral action on the part of the Palestinians was triggered by a Middle East peace process that has come to a standstill since Netanyahu came into power. The Palestinian leadership, under Abbas, are trying to reshuffle the deck in the region and force Israel to move forward. And this time, it appears the Palestinians have chosen a good weapon in their battle for self-determination. In recent days, Washington, Brussels and other capital cities have dispatched envoys to Ramallah in 11th-hour efforts to prevent the worst. Germany, which opposes a unilateral move by the Palestinians, sent Foreign Minister Guido Westerwelle earlier this week to meet with both Abbas and Netanyahu.

The US and countries in Europe have all emphasized that unilateral action on the part of the Palestinians could damage the peace process. It could also, however, be damaging to the images of Obama and the EU. For Obama, who entered office with a message of conciliation between Muslims and the United States, it could mean a total loss of credibility in the region. Meanwhile, the European Union fears that any vote at the UN could reveal yet again just how divided the member states are on issues of foreign policy.

With one week to go before the planned application, there is still plenty of time for diplomacy. "There are many words from many places, but what I'm telling you is that we are deliberating all these details and it is not yet finished," the Associated Press quoted the Palestinian ambassador to the UN, Riyad Mansour, as saying.

In Germany, the issue of the Palestinians moving to declare statehood dominates the editorial pages. Predictably, commentaries tend to run straight down traditional left-right political lines.

"Eighteen years after the signing of the Oslo Accords, it is hardly surprising that the Palestinians are simply tired of conducting endless bilateral 'peace talks' with Israel, which have only led to more settlements and other land grabs. What is surprising, however, is that the Palestinian National Authority is daring to oppose the US government so openly. After all, the US has not only threatened to veto the request in the Security Council, but has also threatened to cut off all financial aid."

"The Palestinians' demand is an expression of despair. They see no other way to oppose the policies of the Netanyahu government but to put the Middle East conflict back on the international stage. The UN created the problem, goes their thinking, so the UN should also solve it. At the very least, the UN should send a signal that the vast majority of its members advocate a two-state solution. Lip service on the part of the international community is no longer sufficient for the Palestinians."

"The paramount aim of German diplomats must therefore be to circumvent this situation (of having to choose between European allies or Israel). It was right that Chancellor Angela Merkel earlier warned the Palestinians against taking unilateral steps, and it was necessary that Foreign Minister Guido Westerwelle made it clear again this week that they cannot count on a German vote in the Security Council. In any case, the bid is futile, because the US will veto it. There is the hope, therefore, that the Palestinians will thus abandon the attempt, despite their strong statements. That would also be a credit to German diplomacy."

"Germany's importance in the Middle East has grown considerably in recent years. One reason for that has been the failings of the US. President Obama has let down the Arabs and failed to impress the Israelis. The existing gap between them has in fact barely closed. But the Europeans still have no other choice but to try."

"Here the Germans will play a key role; and that is precisely because they are biased when it comes to the conflict in the Middle East. While others, especially Scandinavians and the French, have become advocates for the Palestinians, the German government has retained loyalty to Israel out of an historical responsibility. That the current government in Jerusalem always provides better arguments for Israel's enemies than its friends does not change anything. Given the oppressive isolation of the country, the value of this German solidarity has risen dramatically recently."

"Solidarity with Israel from Europe and America is certain. But something has shifted. As long as the Arab states were dictatorships that offered foreign policy security, then just about every means of demonstrating strength seemed legitimate. But now that the political systems in Arab countries are changing, Israel's policies seem increasingly inappropriate and unjust. That is why the Palestinians enjoy great support worldwide -- time is on their side."

"Much injustice has befallen the Palestinians, and they have earned the right for support in their peaceful fight for self-determination. Those who fear that this would jeopardize Israel's security and therefore deny recognition for Palestine should have a Plan B for how the two-state solution will work after September. Out of solidarity with Israel there are reasons to vote against recognizing Palestine. But the Israelis need to understand how high the price will be for denying a people their due."

"This crisis has shown which friends one can really count on. As it turns out, there are not many. Now even the former president of the European Parliament, the conservative politician Hans-Gert Pöttering, has advocated for Germany to recognize a Palestinian state if Israel continues with its construction of settlements. Israel has done its part in contributing to the crisis, like including Jerusalem in settlement activity."

"But even if the establishment of a Palestinian state were the solution to the conflict in the Middle East, one should still be against this initiative at the UN because the Palestinians are taking the easy route in the sympathetic UN General Assembly, rather than making the painful compromises that are necessary for a peaceful solution. The Pötterings of this world should be reminded that it was the Palestinian leadership that in 2000, during the negotiations at Camp David under the direction of Bill Clinton, refused a compromise solution. Shortly thereafter, Yasser Arafat let loose his dogs of hell and destroyed the peace camp in Israel with the intifada. Now the Palestinians are again trying to take a short cut to their own state rather than making necessary compromises. Germany should not support this blatant violation of the Oslo Accords." 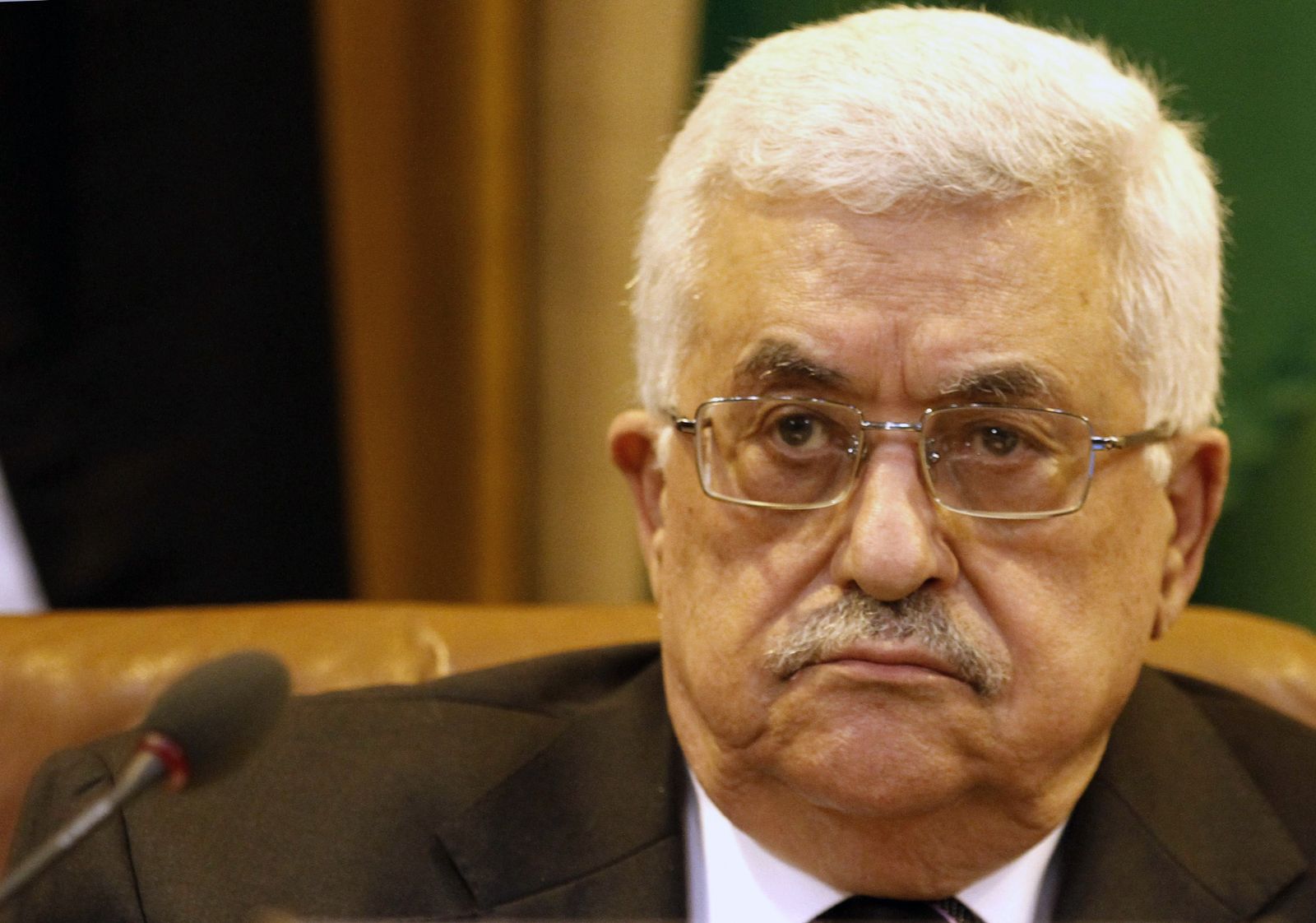 Palestinian President Mahmoud Abbas attends a meeting with Arab foreign ministers in Cairo on Sept. 12: "The Palestinians' demand is an expression of despair."