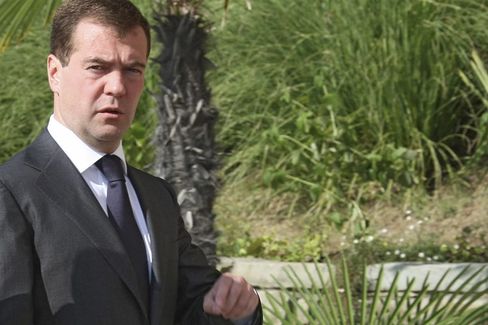 Russia's new president, Dmitry Medvedev, after a meeting with Angela Merkel on Friday.

The fighting has stopped, a French-brokered ceasefire has been signed and Condoleezza Rice -- on an emergency trip to Tbilisi on Friday -- has called for Russian troops to leave Georgia "immediately." But as of Saturday morning, they hadn't. Even while Rice talked to reporters in Tbilisi on Friday, a column of at least a dozen Russian vehicles rumbled to within 40 kilometers (25 miles) of the city, according to the International Herald Tribune. It was their closest approach to the Georgian capital yet.

The Russian invasion of Georgia last week was ostensibly to protect two Moscow-leaning breakaway provinces -- South Ossetia and Abkhazia -- from Georgian military aggression. Now it's clear that Moscow has something else in mind. German Chancellor Angela Merkel flew to Russia on Friday to convince Russian President Dmitry Medvedev that Georgia's "territorial integrity" was paramount. Medvedev made soothing noises, but the meeting was reportedly stiff and cold.

A resurgent Russia -- using America as an example -- seems to be asserting its "interests" inside the borders of another country, whether the West likes it or not. Reuters reported Saturday that there was no sign of retreat by Russian soldiers in the Georgian city of Gori, where most occupying troops are stationed. "We will be here until (Georgian President) Saakashvili resigns," one Russian reportedly said, at a checkpoint near Gori.

German papers on Saturday are trying to interpret the icy summit between Merkel and Medvedev -- which took place in Sochi, a Russian resort town on the Black Sea, not far from the crisis region. They're also trying to understand what Russia wants.

"The chancellor will have traveled to Sochi with no illusions. But Germans who are still on the lookout for a new Kennedy -- wherever he might be found -- will have been disappointed by the young Medvedev's hard line against Merkel. For Merkel herself it would have been a new experience: In spite of French President Nicolas Sarkozy's diplomatic exercises (in brokering the cease-fire), Moscow sees no need to give an inch to the European Union."

"The EU has to be ready to defuse this situation. But it can't forget its interests and principles in the process. Yet who will protect them? Sarkozy said in Moscow that it was normal for Russia to want to defend Russian-speaking people outside Russia's borders. Thankfully this sentence -- which must have horrified people in the Baltic region and beyond -- was not repeated in Sochi."

"(In Europe) the warnings and threats from Russia over Kosovo's recent independence -- and the precedent it set -- were taken as rhetorical. Last year at the G-8 summit in Heiligendamm, Germany, Putin warned of a 'new order in the post-Soviet region.'"

"It wasn't foreseeable that Russia would meddle in the Caucasus to compensate itself for the perceived defeat in Kosovo. But the slight to Russia didn't seem to make an impression (in the West) or figure in political decisions. Anyone who understands the 19th century and its diplomatic rules, however, would have been duly warned."

The left-wing daily Die Tageszeitung notes that Russia may have used cluster bombs in Georgia:

"Human Rights Watch has charged that Russia killed eleven people with cluster bombs in its war against Georgia, and injured dozens of others. Even if Russia denies this charge there is reason to suspect that it's true. Russia has also used cluster bombs in Chechnya and Afghanistan -- in massive numbers -- and claimed a huge number of civilian lives."

"The international community needs to pressure Moscow to sign a general ban on cluster bombs, along with more than 100 other countries, at a conference in Dublin in May."

The center-left Süddeutsche Zeitung gives the most thorough assessment:

"The five-day war over a fleck of earth smaller than Lower Saxony (or the US state of Rhode Island) will go down in Kremlin annals as a success. Is it? Has Russia achieved what it wants?"

"After 14 years of merciless war policy against Russia's own troublesome breakaway region of Chechnya, Medvedev has now made a breathtaking about-face, and argued for the right of self-determination in a foreign land. 'Territorial integrity' -- defended by Russia in the Chechen capital of Grozny at the expense of tens of thousands of lives -- is now negotiable. At the same time Moscow shows as little true interest as Tbilisi in the fate of South Ossetians. Russia has simply hollowed out Georgia's sovereignty. It has even handed out passports there (in Abkhazia and South Ossetia)  In these Black Sea regions the economic and political interests of Russia intermingle."

"Russia, like America in Iraq, has crossed a distinct line. For the first time since the fall of the Soviet Union, it has sent troops into another country, and with every passing day it grows more difficult to understand what exactly Russian soldiers have lost there."