The Cold War was -- for the umpteenth time -- declared finally over after the Lisbon NATO summit on Friday and Saturday. Leaders of the Western military alliance and Russia agreed to cooperate on a missile shield for Europe to intercept long-range missiles that could be fired from the Middle East.

Leaders said the agreement reached between Russian President Dmitry Medvedev and the 28 NATO leaders, could be the beginning of a long-term strategic and security partnership.

"The fact that we are talking to Russia about common threats and the chance to cooperate with Russia on missile defense is an extremely important step," said German Chancellor Angela Merkel. "That could be proof that the Cold War has finally come to an end."

NATO Secretary General Anders Fogh Rasmussen and Medvedev said the former enemies had made a "historic" new start in relations that had been upset by Russia's military intervention in Georgia in 2008. They agreed to expand their cooperation on global security issues, including Afghanistan.

The summit also agreed on a timetable aimed at handing control of security to Afghan forces by the end of 2014.

German media commentators say the label "historic" is unwarranted because the summit resulted in little more than the expression of good intentions. NATO's rapprochement with Russia now needs to be put into practice with concrete progress on missile defence, nuclear arms reductions and cooperation in other areas, they say.

There are obstacles both within Russia's power structure and in the West to the rapprochement, editorialists write. Those need to be overcome before the Lisbon summit can truly be hailed as historic, they say.

"NATO leaders gathered in Lisbon because the alliance's old concepts aren't sufficient any more for the new threats, such as terrorism, cyber attacks and Iran. What can a military alliance do against suicide bombers? At what point does an attack with a computer virus trigger a mutual defense response by NATO? NATO is an alliance of insecurity, and Lisbon demonstrated that. No issue makes that as clear as Afghanistan. The only thing that's clear is that the NATO members want to get out of this disastrous war as quickly as possible for domestic political reasons. The withdrawal is due to start in 2012 and due to be completed in 2014. That's the message of Lisbon."

"Such numbers games don't fit in with the political and military situation on the ground. The situation hasn't improved much. It is more than doubtful that the Afghan government will be able to guarantee stability in the future."

"It is similarly unclear what the alliance's relationship with Russia will look like in the future. It is a positive sign that Russian President Dmitry Medvedev traveled to Lisbon to reaffirm his desire to cooperate with the former enemy. But no one knows if the grand gesture will lead to an improved relationship. It is far too early to declare a new era in relations with the former arch-enemy, as some did in Lisbon."

"Moscow is still dreaming of dividing Europe and the US. The hardliners in the Russian leadership are thinking in terms of the Cold War. They want to safeguard Russia's influence on its immediate neighbors, and they continue to see NATO as a threat. Western diplomats are trying to assess the strength of the conservatives, who include Foreign Minister Sergey Lavrov. And it is totally unclear whether Russian Prime Minister Vladimir Putin supports Medvedev's policy."

"At the start of his presidency, Medvedev demanded a new order for Europe. At the time, people thought Russia wanted to divide Western Europe and drive a wedge into its alliance with the US. A few crises later, the motives and interests have been clarified: Russia, the nations of Central and Western Europe and the US can only benefit if they end their anachronistic rivalry. The world has other problems."

"NATO and Russia have enough common worries. Both should be able to remember that there is nothing that brings two sides together more than a common enemy."

"For the first time, former enemies want to join forces to shield themselves from a third party. Given the history of this relationship between two former enemies who used to threaten to destroy each other several times over, one can describe that development as 'historic.' But so far this new era only consists of declarations of intent that don't even correspond completely. The conditions that the Russian president is attaching to Russia's participation in the missile shield aren't to everyone's taste in NATO. If they aren't fulfilled, Russia will withdraw not only from this project but from the new era as a whole.

"But the new friendship also faces pitfalls in the West," the newspaper writes, adding that there is a chance that Republicans in the US may refuse to ratify the New Start nuclear arms reduction treaty.

"It is all too understandable that NATO is celebrating its rapprochement with Russia as a historic success. After all, the alliance urgently needs a taste of success. Chancellor Angela Merkel even declared after the weekend NATO summit that the Cold War was 'finally over.' But there's not much substance behind the grand words. The rapprochement with Russia is an important first step, nothing more. There are too many question marks hanging over the new partnership that NATO and Russia are now declaring, not just regarding the longevity of Moscow's enthusiasm for it, but also NATO's own position.

"The biggest drawback is the unstable power base in Moscow. The rapprochement with NATO is being driven by Russian President Dmitry Medvedev who was remarkably open and ready to talk in Lisbon -- the exact opposite of Vladimir Putin's Rambo-like performance at the previous NATO summit in Bucharest in 2008. But it is unclear how strong Medvedev really is, and how strong Russia's internal government opposition to a rapprochement is. A lot depends on that, and on the outcome of the presidential election in 2012.

"But the second big unknown is the US. President Barack Obama is weakened and can't be sure even of securing the next small step towards rapprochement: the ratification of the New Start disarmament treaty with Russia in the foreseeable future. If that doesn't work out, NATO's new closeness with Russia would suffer a severe setback.

"Historic progress in foreign policy often consists of small, hard-fought steps. But they are worth the trouble. If the cooperation with Moscow succeeds, it could serve as an example of how blocs that used to be enemies can settle their differences. That would really be historic."

"The NATO summit in Lisbon is a further episode in the long line of celebrated 'historic events.' Unfortunately, everyday life always seems to catch up with the much-praised reconciliation between Russia and NATO. Whether that is NATO's wars in Yugoslavia or in Iraq, or Russia's invasion of Georgia, Cold War thinking has always returned to the fore. Nevertheless, the intention to analyze the problem of a European missile defense shield together is a success."

"Whether it is the Germans, the Dutch or the French, the allies want to get out of Afghanistan. The withdrawal is now due to start as early as the middle of next year, and from 2012 for Germany. The timetable reveals the intention (behind the plans): The first Bundeswehr soldiers must start coming back before the 2013 German election. By end-2014 at the latest, the Afghans should be responsible for their own security. It is doubtful that the country will then finally come to peace. In the worst case, a failure in Afghanistan will reveal the limits of NATO's capabilities." 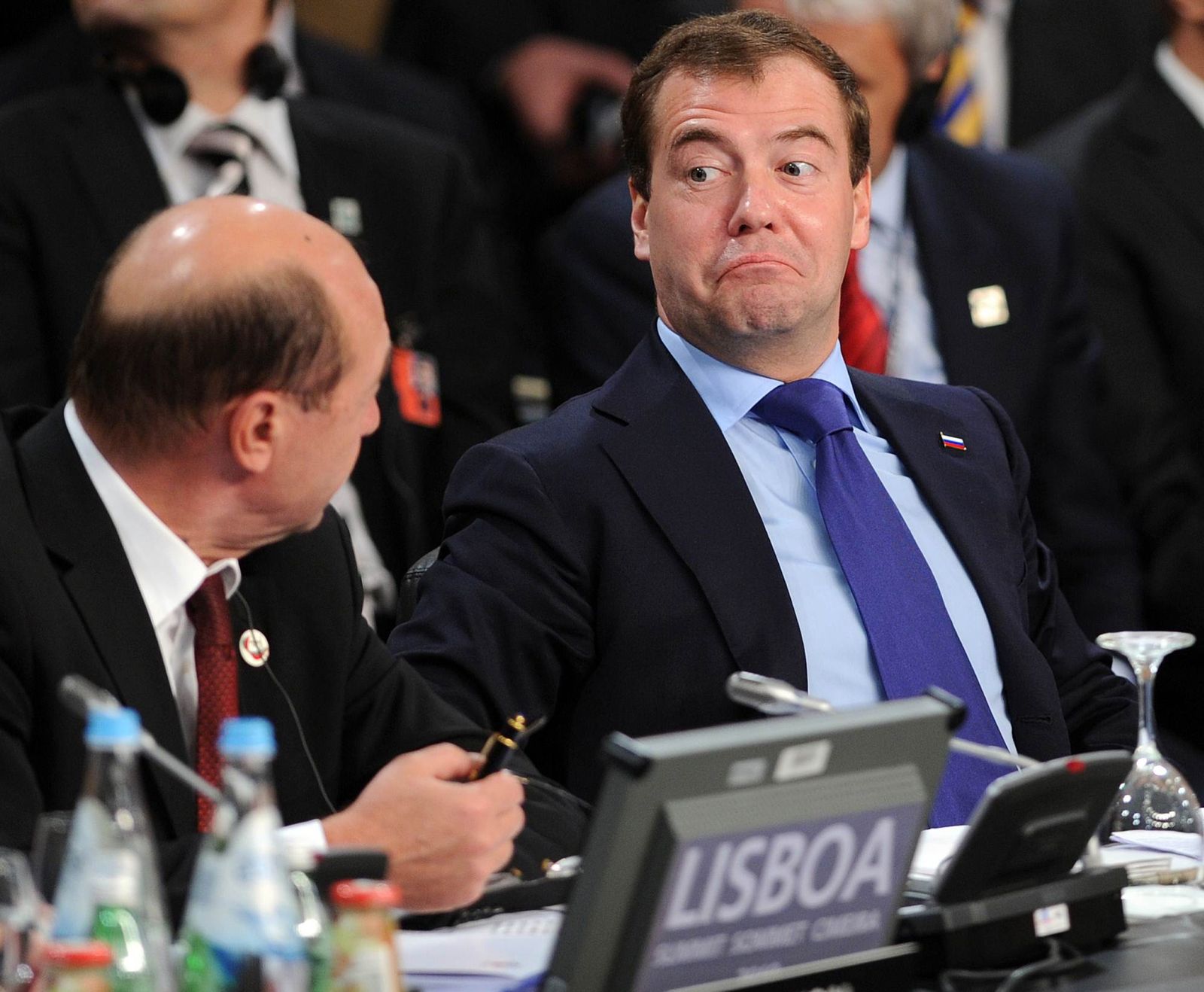 Russian President Dmitry Medvedev (right) said the Lisbon summit had made a "historic" new start in relations between NATO and Russia.