Western pressure on Iran over its nuclear program continued Thursday, as the European Union moved to tighten some sanctions against the country, and laid the groundwork for a possible EU oil embargo.

The EU added 143 Iranian entities and 37 individuals to the list of those who assets would be frozen and who are banned from entering the 27-nation bloc. A decision on whether or not to ban oil imports from the country is expected before the end of January. In 2010, Iranian crude accounted for 5.28 percent of oil imports to the EU.

European Energy Commissioner Günther Oettinger told Reuters that an EU embargo on Iranian oil would require the support of all 27 EU states. The measure has been backed by France and Britain, but faces resistance from Greece. "Greece has put forward a number of reservations," French Foreign Minister Alain Juppe told the Associated Press. "We have to take that into account. We have to see with our partners that the cuts can be compensated by the increase of production in other countries. It is very possible."

The tightened sanctions come in the wake of the storming of the British Embassy in Tehran on Nov. 29, in which protesters tore down the British flag, set fire to a car and caused what some eyewitnesses say is considerable damage to the compound. In response, the British government withdrew its diplomats from the country and expelled Iranian diplomats from London. Several other European countries moved to withdraw their ambassadors from Tehran as a result of the storming, which many believe had the backing the Iranian government, angry over further sanctions against the country following a report from the International Atomic Energy Agency (IAEA) on its nuclear program last month.

In Berlin, German Foreign Minister Guido Westerwelle met with the Iranian ambassador Wednesday, and said he was looking for a full explanation from the Iranian government on the incident. "We in Europe want to send a joint signal of our solidarity with our British partners," he said.

The EU sanctions were welcomed in Washington on Thursday by President Barack Obama's administration. "Today's actions underscore how the United States and our European allies are committed to working together on these shared challenges," the White House said in a statement.

Meanwhile, the US Senate voted unanimously Thursday in favor of a measure that would penalize foreign financial institutions doing business with Iran's Central Bank. The move came despite concerns from Obama's administration that it could alienate much-needed allies in their policy toward Iran. During a visit to Turkey this week, US Vice President Joseph Biden also called on that country to impose stricter sanctions on Iran.

German commentators Friday consider the options available against Iran, especially an EU oil embargo. One thing crucial to any success, they say, is more support from China.

"Iran's power in the region is eroding. The USA may have removed Iran's biggest enemy, Saddam Hussein, from power and is leaving Iraq, and soon will be leaving Afghanistan.... But the Arab Spring revolutionaries, cheered on as they were by Tehran, want nothing to do with a theocracy on the Khomeini model."

"Hopes for a comprehensive reconciliation of interests, a grand bargain between Iran and the West, have evaporated for the time being. Given the approaching US elections in 2012, Obama has little leeway. And Iran's government is paralyzed because of an inner power struggle, coming to a head in the parliamentary elections in March 2012 and the presidential elections the following year."

"Therefore, it is of utmost importance that the issue is not reduced to a choice between the Iranian Bomb and bombing Iran. Decisive sanctions from the entire EU are one of the few messages that Iran will still understand. In addition, Germany should wield its influence in Moscow and Beijing. This strategy, though, doesn't promise great success. But of all the bad options, it is the best."

"With its new sanctions decisions, the EU is nudging closer to the end of the cul-de-sac that it entered in 2005. At that time, German Foreign Minister Joschka Fischer, together with France and Great Britain, pushed through the ultimate demand on Tehran for a full suspension of uranium enrichment. That was the only way, Fischer argued, that the West could reliably signal to the Israeli government that it was taking Israeli fear of Iranian nuclear bombs seriously, and could therefore hold Israel off from taking unilateral military action against Iran."

"Iran specialists pointed out at the time that no government in Tehran, even a democratically-elected one, would be ready to fulfill these demands. What should be feared most, they said, would be the strengthening of the hardliners and those advocating for nuclear weapons. Fischer brushed off these concerns as being 'naïve' and promised, 'by the summer of 2005 a comprehensive agreement between the EU and Iran, in which they could demonstrate to the US how one successfully carries out diplomacy in the Middle East.' The rest is history."

"An oil embargo will worsen the social and economic situation in Iran. The revenues from the country's chief export don't flow just to the nuclear program. The also finance the salaries of teachers, doctors, and garbage collectors. The sanctions will affect everyone, the Iranian people and the government."

"But an oil embargo could also hurt the West, even if Europe gets less than 5 percent of its oil from Iran and Germany gets less than 1 percent. Such embargos also often have a psychological effect. Higher oil prices would be poisonous for the European economy that is already likely standing on the edge of a recession."

"There are limited political options, so these sanctions are justified. At the same time, there are doubts as to whether or not they will bring about the desired result, to prevent Iran from becoming a nuclear power in the next one or two years. Sanctions didn't bring down Saddam Hussein in Iraq or Robert Mugabe in Zimbabwe, or Syria's President Bashar al-Assad."

"In order to get the Iranian regime to give in, support from Russia and especially China is needed. The Chinese have built up their economic ties to Iran and are the protective power, whose word carries weight."

"The Israelis know that attacks on Iranian nuclear facilities would, at best, slow down the Iranian government's development of a nuclear bomb, and not halt it. The Americans can still hope that the Israelis will hold back. Now there is the chance that the Europeans will agree on stronger sanctions against Iran, effectively leading to a stop in Iranian oil imports to Europe. That would hit the fifth largest oil exporter hard, though it could make gasoline more expensive. But if countries like China or India don't take part, then Iran could survive a European oil embargo."

"There is still no threat of a war with Iran, though the world has never before been so close to one. Negotiations with Iran over its nuclear program are now likely over. Until now, it has been enough to apply pressure on Iran. Now, more efforts have to be taken to keep Israel from firing the first shot." 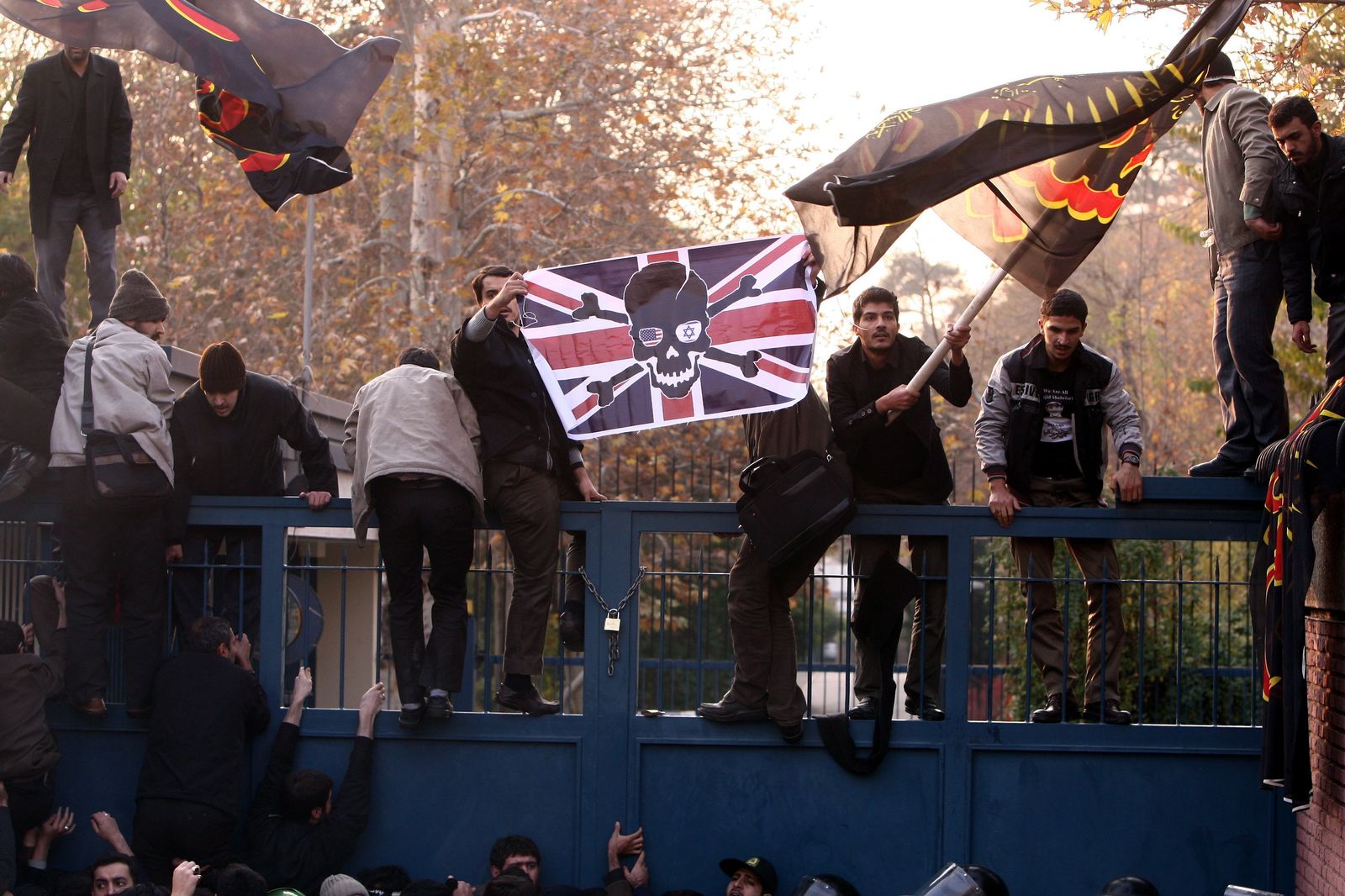 Iranian protesters stormed the British Embassy in Tehran this week.