Passengers flying to and from the United States in recent days have been subjected to additional security measures since the failed attempt by a 23-year-old Nigerian man to blow up a Northwest Airlines flight from Amsterdam to Detroit on Dec. 25.

Umar Farouk Abdulmutallab, a known Nigerian extremist, took explosive materials on to an aircraft in a condom sewn into his underpants. He allegedly prepared an explosive device in the toilet, then returned to his seat after 20 minutes, put a blanket on his lap complaining of an upset stomach, and tried to set off the bomb. Passengers and crew restrained him as flames leapt from his clothing.

Authorities are trying to find out how he managed to get the explosive device past security checks at airports in Lagos and Amsterdam. US authorities have said Abdulmutallab was on a database of known and suspected terrorists but that there had not been enough information on him to put him on a "no-fly" list.

On many US-bound flights in recent days, passengers have been banned from standing up, using toilets and having any items in their laps in the last hour before landing. Some flights have stopped showing on-screen maps of the plane's location. Media reports have said the US Transportation Security Administration has been deliberately vague in its public announcements of heightened security measures in order to keep would-be attackers in the dark.

Beefed-up pre-boarding checks and stricter baggage limits have led to delays on flights bound for the US. Airports and airlines around the world have been complying with US requests for tighter screening. And, in the US, passengers have been advised to check in up to four hours ahead of their scheduled departure times.

German media commentators say the new measures smack of hysteria, and will do nothing to improve security because they can easily be circumvented by a determined terrorist. For example, if toilets are out of bounds in the last hour, an attacker could still assemble a bomb there earlier in the flight. The solution, German editorials say, is to improve security checks at airports rather than treating all passengers as potential terrorists once they're on board.

"Authorities must find the gaps through which the Detroit bomber slipped at the airports in Nigeria and the Netherlands. But they should avoid hysteria. The measures now being imposed on passengers by some airlines have nothing to do with security and amount to a blind overreaction. A terrorist who has already smuggled the ingredients for a bomb on board won't be impressed by new rules forcing passengers to stay in their seats a full hour before landing, prohibiting them from visiting the lavatory or forcing them to lock away their hand luggage. Such measures give the false impression of security."

"The most important lesson of the latest attempt is that the security checks on the ground must be improved. The technology exists for detecting explosives even without using full body scanners (millimeter wave scan). The gaps in security exist where masses of passengers are checked. Even the large international airports rarely have enough security checkpoints to cope with the onslaught of travelers in a timely way."

"Security improves when more security staff and better technology are used. You can't do much to improve security once passengers are on board the plane. Treating passengers as potential terrorists there and going as far as monitoring them on the toilet doesn't enhance security, and merely hurts their dignity. Airlines should take note of that."

The left-wing Die Tageszeitung ran the tongue-in-cheek headline "Flying is Safe Again" above a photo featuring nude passengers in jet. The newspaper wote in an editorial:

"It is the terrorists who determine where we impose limits on our freedom and comfort. Were they to attack planetariums or cinemas, body searches would quickly be introduced in those places, too. The fact that the debate always follows the most recent attack because the next target is unknown shows clearly how symbolic such security strategies are. One could say security checks at the airport are inconsequential as long as there are no such checks at the entrance to the cinema, in the suburban train or in many other 'soft targets.'"

"Evidently authorities are fulfilling the society's need for symbolic security. And one can only hope that the terrorists will continue to regard airline travel as such a highly symbolic target that the focus of security checks on that form of transport actually makes sense."

"The new requirements for US flights will do nothing to improve security and every security official will know that. But simply doing nothing in the wake of such an attempt isn't possible given the usual spiral of hysteria. Let's acknowledge that there will only be absolute security if we are naked and devoid of any luggage when we take our seats, assuming of course that security staff have previously inspected all our bodily orifices. But we understandably don't want that. We even balked at the full-body scanners that the EU Commission wanted to introduce. Such a scanner would have exposed Abdulmutallab's bomb components." 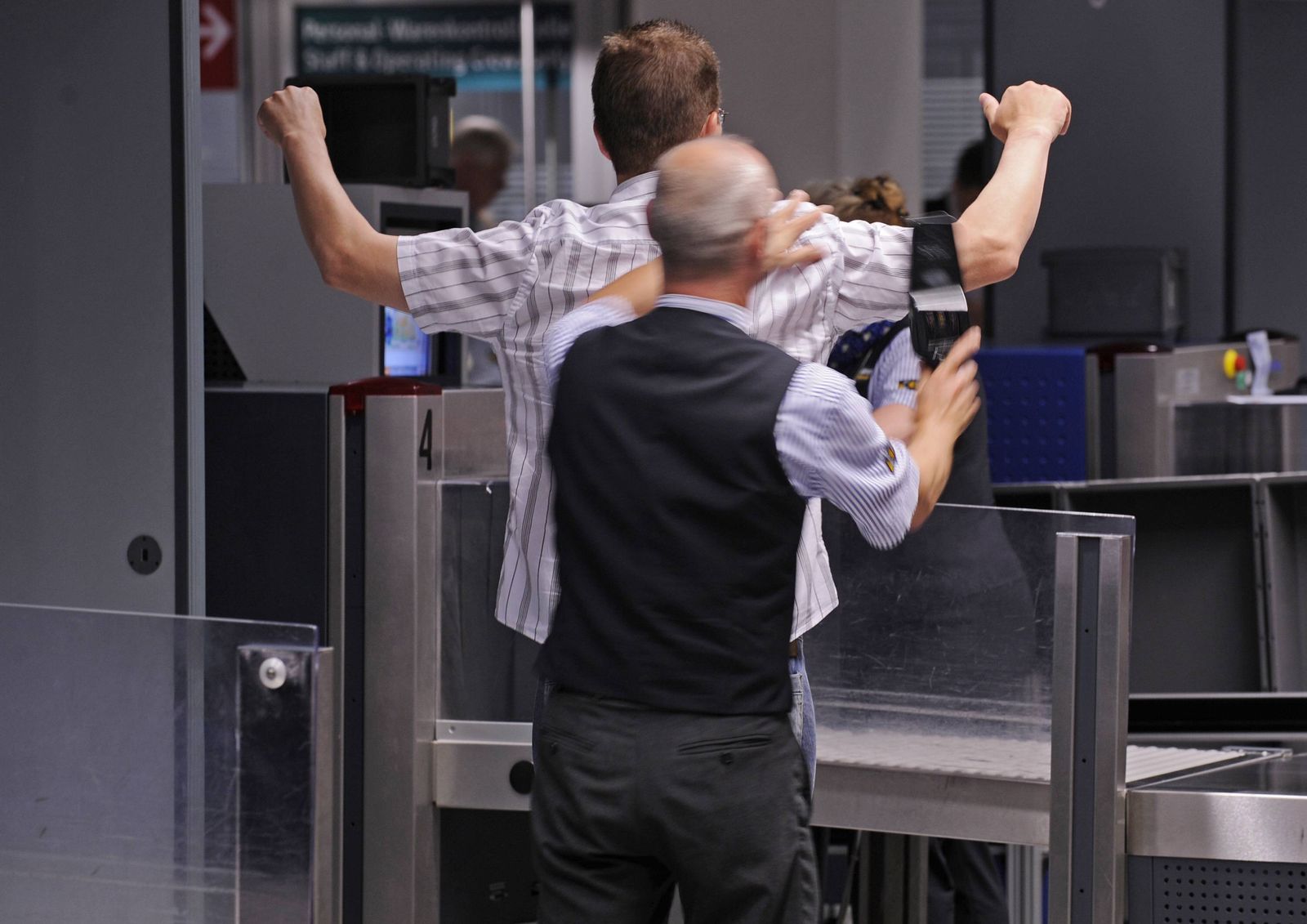 A passenger being checked at the Düsseldorf Airport in Germany. Airports and airlines around the world have beefed up security on flights to the US.