It had been over six months since Syrian leader Bashar Assad gave a speech. But when he stepped before the microphone at Damascus University on Tuesday, it became clear that his thinking has changed little since last June.

"We will not be lenient with those who work with outsiders against the country," Assad said in the rambling, two-hour speech in front of frenetically cheering supporters. "Our priority now is to regain the security we basked in for decades, and this can only be achieved by hitting the terrorists with an iron hand."

The speech came 10 months after Arab Spring uprisings across North Africa began spreading to the streets of Syria. The revolt there has become the bloodiest of the several revolutions in the region, with an estimated 5,000 people having been killed in the country since March. The Assad government has been accused of using live ammunition in its efforts to put down the uprising and even using heavy weaponry such as tanks. A United Nations official reported to the UN Security Council on Tuesday that 400 people had been killed in the country in just the last three weeks, a period of time corresponding to the presence of Arab League observers in the country.

Assad, however, has insisted that the protests against his iron-fisted rule have been bought and paid for from abroad. "Those who stand in the middle are traitors," he intoned. "There is no alternative."

Violence in Syria has increased in recent weeks as defectors from the army and some opposition protesters have increasingly begun firing on government troops. In response, Assad has stepped up his already vicious response.

The global community has thus far struggled to come up with a unified response to the ongoing violence in Syria. Both Russia and China remain opposed to far-reaching sanctions and a military intervention of the kind seen in Libya remains unlikely. "The Syrian regime would be significantly harder to topple and the fallout potentially far more serious, especially given the country's arsenal of chemical weapons," Jeremy Biddie, an expert at the defense analysts IHS Jane's, told Reuters. "Libya's air defenses were a pushover by comparison."

German commentators on Wednesday discuss Assad's speech and the situation in Syria.

"With his unrealistic assurances of victory, Syria's president reminds one increasingly of the fallen Libyan dictator. At the same time, though, Assad is posing as an anti-Gadhafi: he isn't firing off bombastic threats at the international community nor is he speaking pathetically of 'rivers of blood.' Instead, he is trying to portray himself as the only one who can bring about de-escalation."

"In reality, however, he is doing the opposite: For 10 months, Assad has had the military attempt to crush the demonstrations and has pushed his country toward civil war. 'There is no order from any level about opening fire on any citizen,' Assad insisted. But this statement alone is enough to show just how far Assad's rhetoric has departed from reality. Syria's military isn't likely to open fire without such an order. And as president, Assad is the commander in chief. With his speech, he has left no doubt that the bloodshed will continue."

"Assad is cleverer than Gadhafi, and his inner circles appear to be more cohesive than (former Egyptian President Hosni) Mubarak's were. Furthermore, the Syrian regime does not seriously have to fear involvement from Western militaries. The 'Libyan solution' won't happen in Syria. The West will not create a no-fly zone or a buffer zone for the opposition. The danger that a military intervention would set off an uncontrolled wildfire in the region is simply too large."

"Still, the Assad regime shouldn't feel too secure. Its only remaining ally in the region, Iran, is also ostracized. And the relative goodwill that Russia, a UN Security Council member with veto power, has toward the Syrian government is not guaranteed to last forever. And this is where the West should step in to stop the murder in Syria. Russia must be taken up on its promise to show Assad and his henchmen the door. That could mean giving them a way to flee, such as possibly offering a Russian exile for the dictator from Damascus."

"The more confused the situation in Syria becomes, the more Assad shows himself to be a ruler with a corset around his heart and brain. In his speech, he rattled off his familiar list of planned reforms: a new constitution, new laws and measures to fight corruption. All those things are justified. But Assad is no longer convincing -- he has been promising reforms for years but has never delivered. The rebellious part of the population, whether peaceful or militant, distrusts him because of their terrible experiences in the past."

"In order to find a way out of Syria's impasse, Assad needs to create the basis for a dialogue between the regime and opposition. That would involve moderation on the part of the security forces, a guarantee of impunity for the insurgents and freedom of movement for international observers. That does not mean a carte blanche for violent militants. If the peaceful opposition sits down at a table with Assad, the militants will be isolated."

"No one is surprised that Syrian President Bashar Assad doesn't want to give up power. Yemen's leader Ali Abdullah Saleh has been demonstrating since this summer how a clever strategy can make one appear to give ground while keeping everything the same. In his fourth big speech since the 'Syrian Spring' began, Assad announced a referendum for a new constitution in March, in addition to elections to come later. Apart from that, he called the opposition and insurgents 'terrorists' again, saying that he sees a 'foreign conspiracy' at work. In the Middle East, such a choice of words stands for yesterday's world."

"The fronts between Assad, the opposition Syrian National Council and the 'Free Syrian Army' have hardened. Much will depend on whether leading military officials and more of the ranks resort to desertion. In Yemen, Saleh remains in charge because he still has enough supporters in the military. The Syrian opposition wants the United Nations Security Council, which met again on Tuesday, to concern itself more with the situation in Syria and increase pressure on Damascus. Assad will certainly perceive this as part of the 'foreign conspiracy.'" 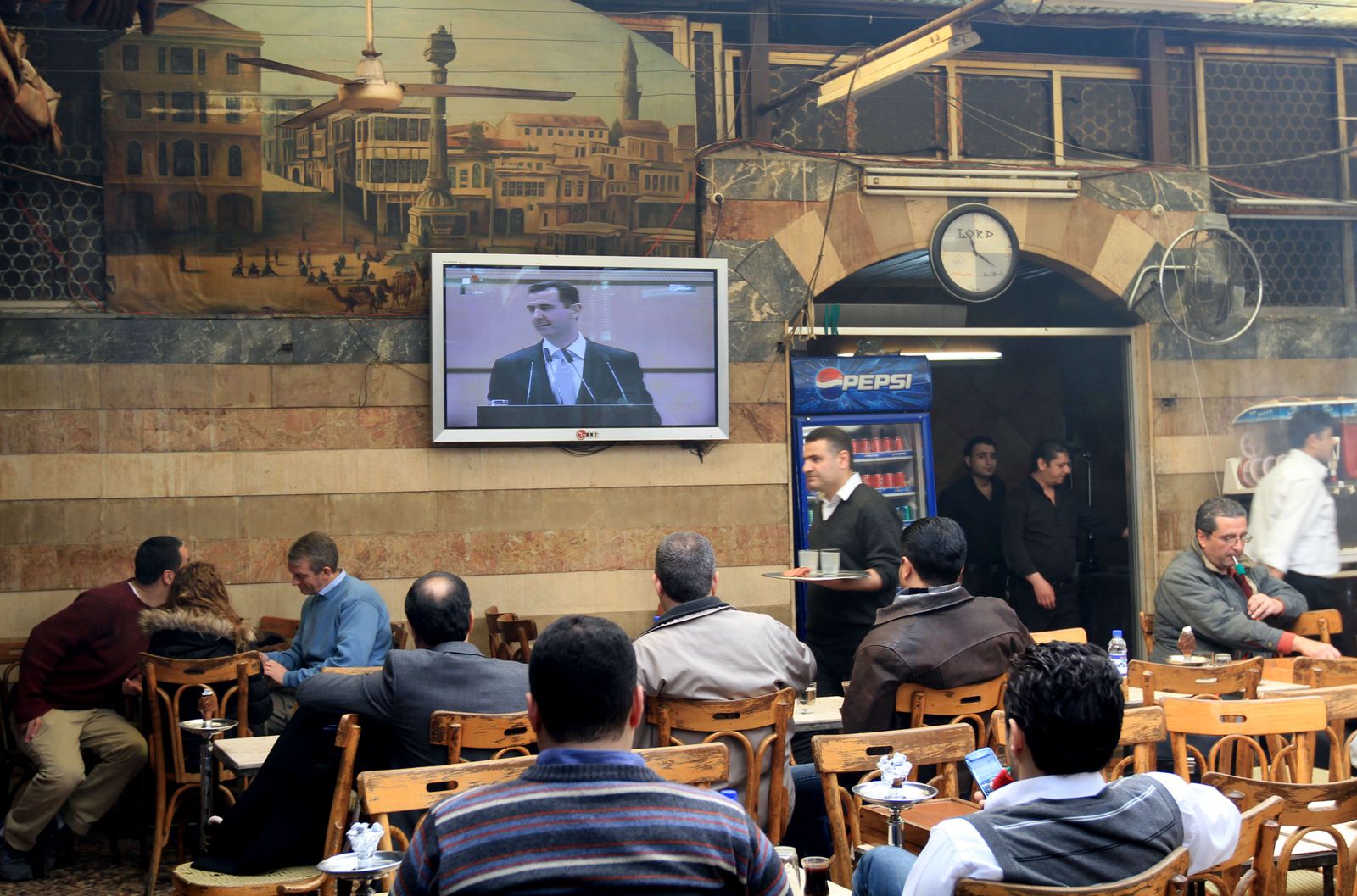 Syrians watching President Bashar Assad's speech on a television in a Damascus shop in Tuesday.