It is a match of potentially far greater importance than that made on Friday in London's Westminster Abbey. But enthusiasm has so far been in short supply. Following the Wednesday announcement of the agreement reached in Egypt between Palestinian President Mahmoud Abbas' Fatah party and its Islamist rival, Hamas, the global reaction has been one of caution and reserve.

And Israel, which seems to have been taken off guard by the announcement, has reacted with particular skepticism. Abbas, said Israeli Prime Minister Benjamin Netanyahu, must choose "between peace with Israel and peace with Hamas." President Shimon Peres called the alliance a "grave mistake," and Foreign Minister Avigdor Lieberman said that Abbas "must understand that it is not possible to be a partner with terrorists without being a partner to terror."

The Egypt-mediated plan seeks to end four years of hostility between Hamas, which has control of the Gaza Strip, and Fatah, which rules the West Bank. It envisions the creation of a joint caretaker government to pave the way for elections next year. Many observers have noted that the alliance appears to be an effort to pave the way for the hoped-for United Nations recognition of a Palestinian state later this year. US-backed peace efforts came to a screeching halt last autumn once Israel resumed settlement construction following the expiration of a moratorium.

German Foreign Minister Guido Westerwelle reiterated the long-held position of the West that "Hamas is not a negotiating partner." The US has said it will reassess aid to the Palestinian Territories should Hamas join the government. Washington considers Hamas to be a terrorist group. The Hamas leadership has not yet recognized Israel's right to exist.

Abbas has tried to downplay such concerns, saying that Fatah would remain Israel's negotiating partner and that there would be no Hamas representatives in the new government. Furthermore, he promised not to release any Hamas prisoners.

German Chancellor Angela Merkel will welcome Abbas to Berlin next Thursday, and she is expected to expressly outline the West's concerns with Fatah's new partnership with Hamas.

German commentators take a look at the union on Friday.

"For more than 30 years, ever since Egypt recognized the state of Israel, Cairo has had no diplomatic relations with Tehran. Now, Egypt is looking for a new chapter in its relations with Iran, the archenemy of Israel and the US.... Egypt's new foreign policy experts have loosened border controls with the Gaza Strip, weakening Israel's control over the region."

"The crowning achievement in Egypt's reorientation, however, is its apparent mediation between the two Palestinian factions.... Hamas and Fatah still have a number of questions to resolve.... But even the Islamists have to offer people progress, otherwise they risk radicalization or rebellion. Furthermore, the ongoing uprisings in the Arab world are calling decades-old alliances into question. Fatah under the leadership of Mahmoud Abbas lost an ally when Egyptian leader Hosni Mubarak stepped down. Hamas, for its part, is looking uneasily to Syria, where the regime of Bashar Assad is attempting to crush protests with tanks. Hamas' exile headquarters are in Damascus, and Assad supports the group. But for how much longer?"

"Israel too is losing allies. Mubarak is history. The US and the West are, aside from Libya, mere observers. Washington, Brussels and Berlin were unable to influence the pro-democracy protests in the Arab world and have little influence on the new relations now forming in the region.... For almost 100 years, the West drew borders in the Middle East, separated the populations and bought regimes. They will find it more difficult to impose their will on the region in the future."

"There is one good thing about the agreement between Hamas and Fatah to establish a joint, caretaker government, whether it actually comes to pass or not: It reveals the self-deception that Middle East negotiators have for years been victim to. They have acted as though it were possible to find a long-term solution to the Israeli-Palestinian conflict while at the same time excluding the leadership and population of the Gaza Strip."

"But everyone could see that the radical Islamist group Hamas, which took over power in the Gaza Strip in a bloody battle four years ago, would sooner or later have torpedoed any Israeli overtures. The Palestinians can only be bound to an agreement in the long term if all factions are part of that agreement."

"Still, the agreement between the two Palestinian groups is hardly worth the attention it is getting before the promised government is actually formed. Few would be surprised if the deal collapsed again in a few days."

"The handshake of Cairo is a business deal from which all sides hope to benefit. Hamas, backed by Iran and Syria, has transformed the Gaza Strip into an enormous prison, inside of which nothing is prospering -- politically, economically or socially. Furthermore Syria, Hamas' most powerful sponsor, has its own serious problems at the moment. An election could bring Hamas political legitimization in the West Bank as well."

"The moderate Fatah movement in the West Bank, for its part, has used the Palestinian schism -- with massive international support -- to create state-like structures in its area of influence. Given the economic growth in the West Bank, modest though it may be, Fatah can hope that they will be a gleaming example for their Palestinian brothers in the Gaza Strip. Only one of the calculations, however, will prove right in the end."

"The agreement could even be a cause for celebration for the Israelis, if Mr. Lieberman and Mr. Netanyahu were to resist their political reflexes for once and actually think about things. Hamas has long since found peace with the idea of a Palestinian state within the 1967 borders, even if it prefers not to recognize Israel and foreswear violence before such a state exists. The elections now on the Palestinian horizon could easily result in a moderate Palestinian leadership, particularly given that support for Hamas in the Gaza Strip has fallen. There is even a chance that rocket attacks on Israel from the Gaza Strip could be reduced to nothing in the long term. The desired prisoner exchange and the release of Israeli soldier Gilad Shalit could be accelerated. What would hold Israel back from at least making the effort?"

"In principle, the détente between the rival Palestinian organizations could remove a heavy stone which has blocked the path to freedom between the Israelis and the Palestinians for years. If, that is, there weren't serious questions about how the radical Islamist Hamas organization will position itself in the future."

"Following the agreement with the Fatah organization on a caretaker government, Hamas has a good opportunity to exert more influence in the Palestinian camp. But if they remain true to their radical roots and continue to deny Israel's right to exist -- which appears likely -- that would mean nothing but bad news for the peace process." 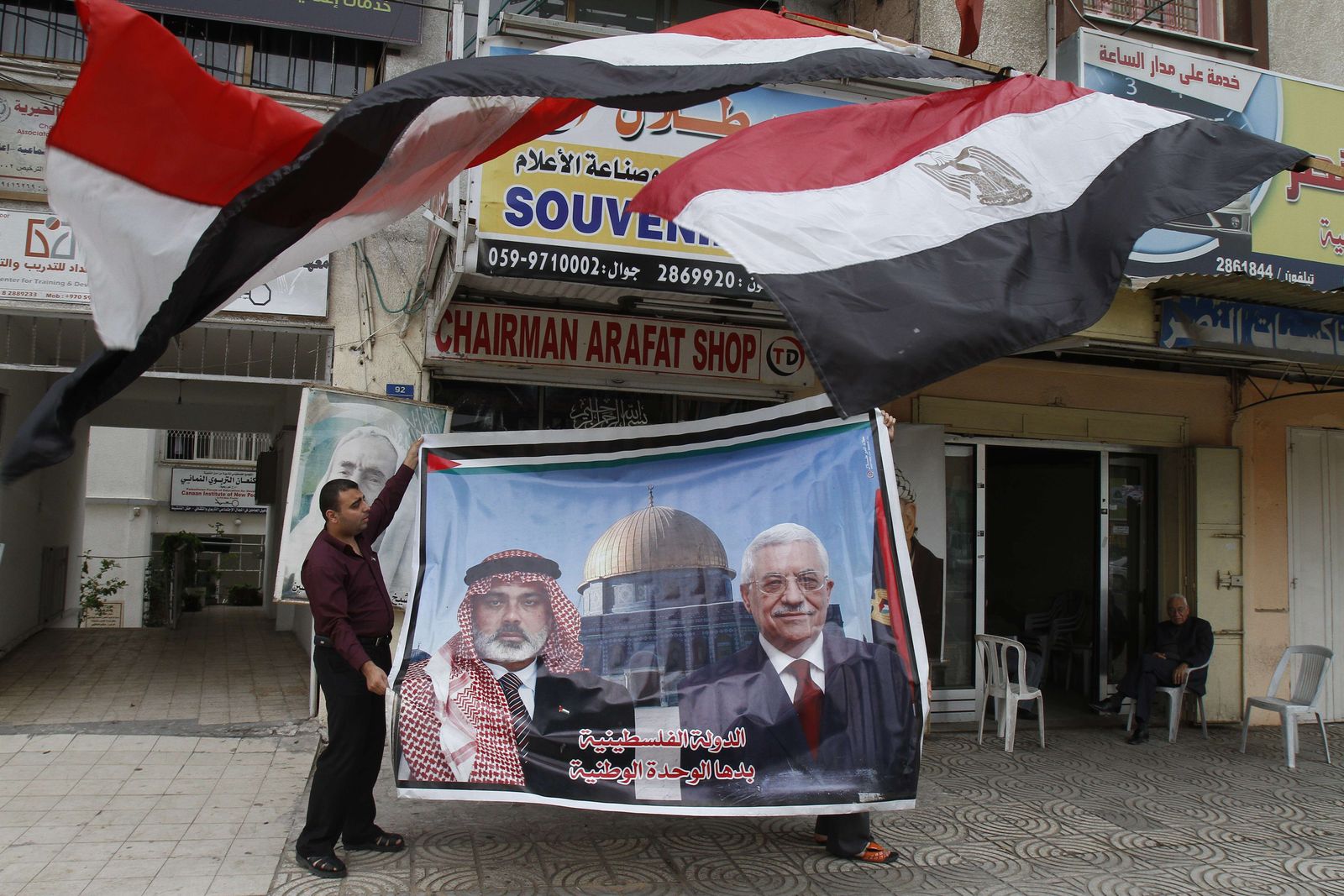 A Palestinian vendor with a photo depicting Hamas leader in the Gaza Strip Ismail Haniya and Palestinian President Mahmoud Abbas.