On Tuesday, US President Barack Obama and his Democratic party were issued a stinging defeat in the mid-term elections as the Republicans gained control of the House of Representatives and installed themselves in 22 governor's mansions.

Though the Democrats narrowly were able to keep control of the Senate, the Republicans, who rode the wave of anti-incumbent sentiment and populist anger over the economy into office, now have the power to determine the House's legislative agenda -- and to block Obama proposals. Indeed, Republican leaders in the House have already promised that their first order of business will be to repeal Obama's health care reform -- his signature achievement.

Several German opinion-makers were clear that the election was more of a referendum on the president, who comes across as "cold, arrogant, and elitist," and less of an endorsement of the Republicans and their policies. There is widespread agreement in the editorial pages that Obama failed to make the case for his administration's accomplishments, a fact that he himself has acknowledged.

But the biggest challenge for Europeans appears to be understanding the role of the Tea Party activists -- described as the "true victors" of Tuesday's elections -- and predicting what kind of influence they will have over the next two years.

Congressman John Boehner, the Republican from Ohio who stands to be the next Speaker of the House -- and third in line for the presidency -- made his first call on election night to supporters of the Tea Party movement in southern Ohio, and according to The Washington Post, told them: "I'll never let you down."

The effect of the elections on US-German relations were downplayed in Berlin. German Chancellor Angela Merkel's spokesman told reporters on Wednesday that the German-American friendship doesn't rest on the shoulders of just one person, namely Barack Obama, and Foreign Minister Guido Westerwelle said the American election was a vote on domestic policy, not foreign policy.

Still, the new balance of power has been cause for discussion.

"Europeans have to understand that America is different, and that means it is also different from how they would like it to be. And secondly any autopsy of the Democrats' massive defeat on Tuesday shows that the right did not prevail simply due to their own strength. This was a collapse of the Obama coalition -- because the president has lost the support of America's middle class."

"In Western Europe Obama still enjoys almost messianic approval ratings of 80 percent. Nowhere else on earth regards Obama's program as more self-evident. Reforms such as health insurance for all, an active state and more environmental and climate protection are seen as catch-up Europeanization, a simple normalization. Millions of Americans, on the other hand, see this as an audacious if not revolutionary agenda to serve the interests of the state."

"The fact that Obama's new state is too slow and has produced too few successes has also been politically disastrous. More than $800 billion (€ 562 billion) was supposed to stimulate the economy -- but the unemployment rate has stagnated at almost 10 percent. And while state money has saved Wall Street and the auto industry from bankruptcy, this year alone sees one million families facing the prospect of losing their homes."

"Two years ago his vision inspired voters. Today the same man often sounds strangely bloodless. Back then his cool, self-assured composure impressed many, now the same character comes across as cold, arrogant, even elitist. The right may well put on a shrill rough performance, and stand in the media spotlight. However, this president was never going to win votes on the right anyway. Obama's historic victory in 2008 was created by the middle of American society -- the independent voters and the suburbanites. It is this center that has abandoned him."

"The country is experiencing a new version of an ancient dispute over the heart of America. It is about what belongs to the state and what belongs to the citizens. The Tea Party wants less redistribution and more individual responsibility. The fall from grace for them was the bank bailout, because for them freedom includes risking failure. Many of the Tea Party people are 'libertarians' who are horrified to see managers on Wall Street make huge profits for years and then see the entire population have to bear their losses."

"That is why the grassroots movement is shy of both parties, who they see as being in bed with big business. Naturally it is unfair that the Democrats bear the brunt of this rage. After all Obama inherited the economic crisis, the bank bailout and the first part of the stimulus program from his predecessor. However, the fact that the president chose to extend the redistributive state through a health reform in the midst of the crisis was the final straw. And unlike most Europeans, the Americans have a clear perception of who ends up paying the bill: the middle class."

"Two years ago, Obama's call for change won him the election. Now the conservative-libertarian part of the population's call for change could cause a political earthquake in the other direction. American politics have become volatile."

"The question is whether Obama wants to, or even can, move to the political center -- and even further away from the disappointed left-wing of the Democrats -- in order to search for compromises with the (stalwartly right-wing) Republicans."

"Naturally the new strong men in Congress will have to play along....The Republicans face two alternatives: Either they can ensure that Obama has no more legislative successes and use their dramatically improved power to block him. Or they can seriously look for issues on which to cooperate with the president."

"Paralysis and polarization -- this might suit many politically but it is not a suitable recipe for getting America out of its deep crisis -- a crisis that Obama has to thank for his victory and that he has not yet mastered."

"An America that is largely concerned with itself is not the brightest of prospects. On the other hand it offers Washington's partners the opportunity to come up with their own initiatives."

"The Republicans didn't win this election. The president lost it. Two years ago voters were sick of George W. Bush, now it is Barack Obama who is being punished. Frustration seems to be the most important motivation for voting and there is a rapidly changing perception of which camp is to blame for the failed policies."

"Yet it is not really clear what policies US citizens want. On the one hand they want a lower public deficit, but at the same time they demand tax cuts and increased spending on job creation. They demand more than they can get. And when their wishes are not fulfilled they turn to the next choice."

"If there was one true victor on election night then it was the Tea Party movement.... What matters now is whether the Tea Party can manage to establish itself as an independent power in Washington, as a voice of dissent next to the Republicans -- in order to profit even more from the wave of dissatisfaction that is sweeping the land."

"Then anything would be possible in two years. Even the prospect of the former governor of Alaska, Sarah Palin, as the first female president of the United States."

"It was the state of the economy that cooked up the devastating defeat for Barack Obama in the congressional elections. And it could also be the economy that disappoints him when it is time for his re-election bid in two years. After all, a rescue is nowhere in sight. Congress threatens to be paralyzed and the financial instruments are exhausted. If one were a pessimist one would say that the only hope Obama has is a miraculous reactivation of the US economy. But it remains a mystery where that is supposed to actually come from."

"Barack Obama could tell the voters the truth. He could explain that the US economy is not competitive enough, that they have to make savings, and that it is not enough to look elsewhere for someone to blame, for example China and its currency policy. Obama could tell the Americans that the country is facing tough years ahead, before things improve. He could dare to cut spending significantly and use the resources that this frees up to invest in innovation. He could do everything to make sure dynamic US firms prosper and that no companies are rescued just because they are big. However, such a message does not win votes. Obama will instead save the Americans these painful facts. And will bet everything on hope."

"The (Tea Party) movement, with their demands for a smaller state, less federal spending and opposition to Obama, succeeded in shaping the Republicans' agenda. The fact that they could also, through their shrill demonstrations, racist undertones, and, at times, absurd demands, claim this election for themselves, is high drama."

"The Tea Party will have achieved its goal when Republicans in Congress have successfully hindered Barack Obama from pushing through further reforms. But they can also continue to shake up Republican beliefs. They are against any agenda that assigns the state more power. The electoral defeat of the Democrats is therefore also a warning sign for the United States' capacity for reform."

"The Republicans in Congress can now block all policy proposals for the next two years. This destruction is their declared goal. The Democrats and President Obama largest task over the next two years will be to develop a new, constructive narrative opposing (the Republicans), and to bring this uncertain country back to its senses."

"US President Barack Obama failed with one of his primary aims. He didn't succeed in gathering the country's political camps behind one goal. This fact appears almost obsolete after months of protests against Obama's agenda, agitated by fired-up Tea Party activists and the sensational tirades of right-wing provocateurs in radio and TV. Now the mood has also been dragged down by the voters, and not only from the hard-core right radicals in the provinces, but also among the circles who voted Obama into office two years ago...."

"In order to pursue policy with the blockade being threatened by the House of Representatives, Obama has to close the gaps. He must bridge the divide between himself and the moderate Republicans, which could, in turn, initiate another break, this one between the moderates and the Tea Party activists. The conservatives must show who among them is ready to take seriously their congressional responsibilities, and who chooses, instead, the option of becoming known as a total failure or nay-sayer."

"The vote in this election wasn't primarily a vote for Republicans, it was a vote against Democrats. For this reason, the conservatives must, in this notoriously unpopular Congress, show their organizational intent. It would be nice if both sides would try to reach more of a balance." 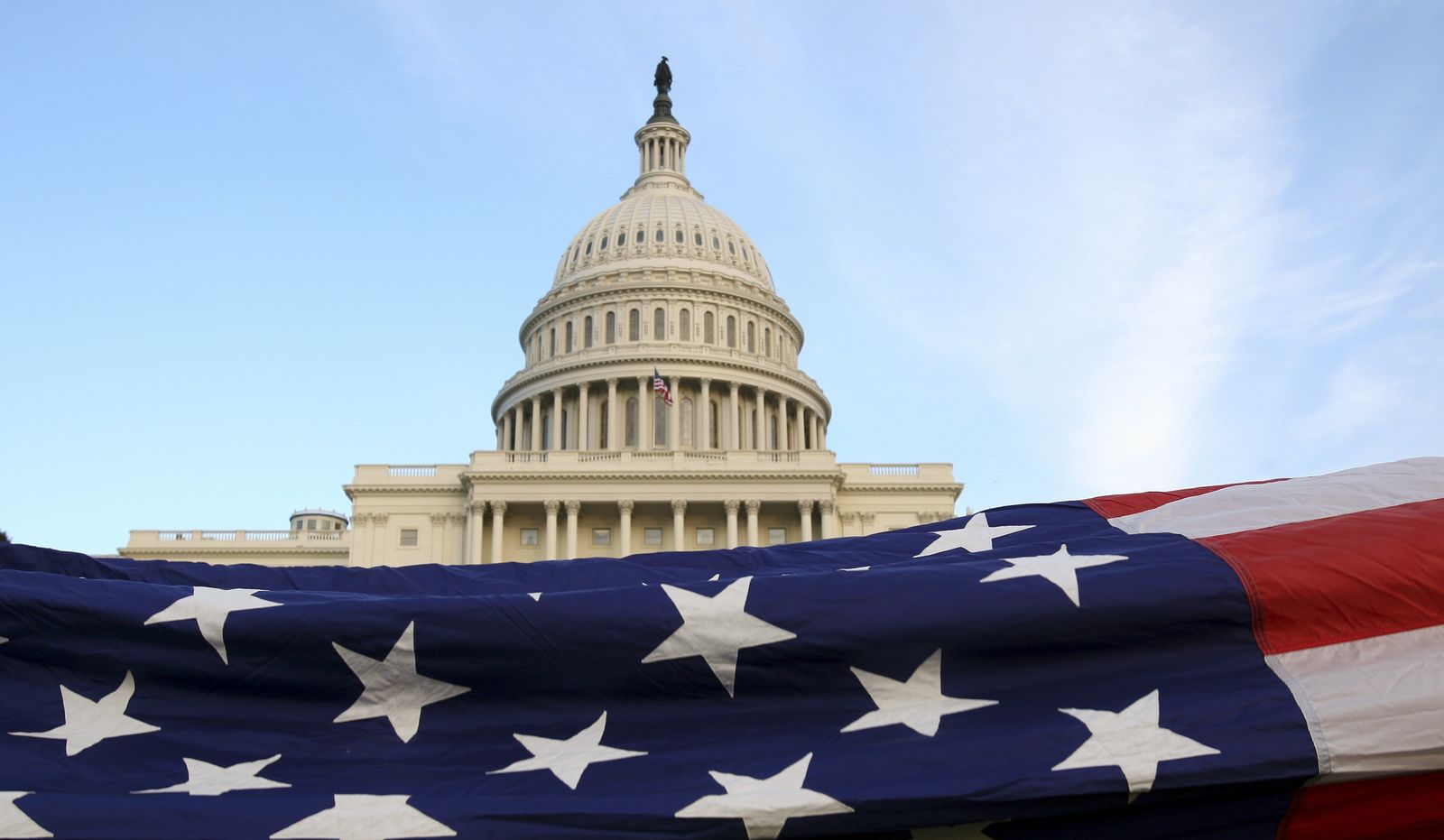 Tea Party Activists display a US Flag in front of the Capitol Building in Washington.