The Middle East peace process has all but ground to a halt after Washington admitted this week that its approach to get the Israelis and the Palestinians back to the negotiating table had failed. The stand-off over the issue of Jewish settlements has left President Barack Obama's policy in the region in tatters and the two sides more entrenched in their respective positions than ever.

The White House has now abandoned its efforts to persuade the Israelis to slow down construction in the West Bank. The Palestinians had insisted on a freeze in exchange for engaging in direct talks.

Two American officials on Tuesday said that the Obama administration had concluded that the strategy of seeking a freeze was not working, while insisting the administration was not back to square one.

Talks between the parties had stalled in September when the Palestinians refused to return to direct negotiations until a new freeze was put in place after the expiration of a previous 10-month slowdown in Israeli settlement expansion. However, Israel blamed the Palestinians for not sitting down to talks earlier during the moratorium that Prime Minister Benjamin Netanyahu announced in November 2009. It seems that the US has now withdrawn its offer of an incentive package to the Israelis in exchange for another 90-day freeze.

The Palestinians are now left with grave doubts that the US will ever be able to broker a final peace settlement if it cannot even persuade Israel to temporarily freeze settlements. There are indications that they could now push ahead with their Plan B, a unilateral declaration of a Palestinian state.

Meanwhile, it seems Washington is going back to the strategy of indirect talks. The White House has confirmed that the administration's special envoy to the region, George Mitchell, is heading to the Middle East next week for consultations with both parties.

The German papers on Thursday take a look at the failed policy and many blame President Obama for allowing the Palestinians to set a settlement freeze as a precondition to talks.

"It was a tactical mistake to present the settlement issue as the main problem in the conflict. From the beginning it was unrealistic to believe that the right-wing coalition in Israel would agree to a moratorium in the long term. … It became clear to the Americans that a 90-day construction freeze would not do much to change the basic problems.... Neither Netanyahu nor Abbas have given the impression that they are serious about peace."

"In recent years it has become fashionable to declare (the Middle East conflict) as the mother of all crises in the Muslim world. However the WikiLeaks dispatches have revealed this to be a huge exaggeration. The Arab states are not worried about Palestine but about the Iranian threat. … It would be better if the Palestinian conflict could be ended. However, if the peace partners are not prepared to do this, then there are more important problems that the US should be devoting its energies to."

"The peace process is at an end. The most powerful man in the world has capitulated to a bunch of settlers on the hills of Judea and Samaria."

"One cannot accuse Obama of not making law and morality benchmarks in the settlement issue. Yet, whoever does this has to be unwavering and prepared to use pressure to push through the right policy. The president of a superpower should be expected to do this, particularly when both the Israelis and the Palestinians are in fact completely dependent on the US. Obama would have had his hands on all the levers. Instead, unfortunately he has shown that he is not capable of using them. In the face of Israeli opposition to the construction freeze, he simply changed course and gave up his own demand. Instead of being principled, his policy is marked by ridiculous zigzagging."

"Obama had his chance in the Middle East and it is hardly likely he will be given another one during the remaining two years of his term.... The Israelis know now that they have nothing to fear from him…. The Palestinians on the other hand have learnt that they cannot trust him.... Now, an escalation can be expected. This conflict cannot simply be frozen, it requires constant new movement."

"The precondition for a peace settlement had been a settlement freeze in the West Bank, a condition that Israel did not agree to from the beginning. … The abandonment of this condition is a clear indication that Obama's Middle East initiative has failed -- regardless of what negotiations continue on whatever level. It is simply the case that the Israelis are happy to live with the status quo, and the Palestinians -- at least those in the West Bank -- are experiencing an economic boom. In other words: Because there is no great pressure on either side, there is also little willingness to compromise."

"The Middle East strategy was a vision that Obama couldn't back up with successes. Now the region is going back to square one. US diplomats will be happy if they can get the adversaries back to indirect talks. And the fatuous habit of US presidents to set annual targets for Middle-East negotiations have come back to haunt them -- just like it did under George W. Bush."

"The US should never have allowed the Palestinians to make the settlement freeze the condition for starting talks. They only unnecessarily created a fixed hurdle. Israel's Prime Minister Benjamin Netanyahu could not push it through, even if he wanted to, against his coalition partners. And Palestinian President Mahmoud Abbas could hardly give up this condition without losing face."

"The Palestinian threat to unilaterally declare a state doesn't seem like an alternative that offers much hope of success. However, there is a glimmer of hope. The Palestinian Prime Minister Salam Fayad is a clear-headed economist. He doesn't just want to declare a state, he has been working on the foundations for one. The West Bank, at least, is experiencing a boom. And that could do more for peace than any half-hearted declarations of intent."

"It's a good thing that the US government has not succeeded in making Israel freeze settlement construction. It would have been window dressing anyway. An extra building freeze of two or three months, which the US negotiators were demanding from Israeli Prime Minister Benjamin Netanyahu, would not have helped the talks. Agreeing to Israeli demands that Jerusalem be exempt from the construction freeze would have amounted to a de facto recognition of Jerusalem's status as the sole, indivisible capital of the State of Israel."

"Such a commitment on one of the most disputed negotiation points of a future peace treaty would have put major strain on Washington's relationship with the Arab states surrounding the Palestinian Authority. Relationships are under enough strain already thanks to the WikiLeaks cables. Netanyahu holds the upper hand: Barack Obama's peace offensive is in tatters. Obama didn't want to saddle himself with a feud with the pro-settlement right-wing coalition in Israel."

"This is now an uncomfortable situation for the Palestinian Authority and its leader Mahmoud Abbas. He has no choice but to throw in the towel since his set-in-stone position was: no construction freeze, no negotiations. If he were to relent, the remainder of his political credibility and that of his Fatah party would be lost. It is now likely that the US failure will lead to improved relations between Fatah and Hamas. Up to now, a US veto and US money has put the brakes on Fatah's willingness for reconciliation. Consideration for the US may dwindle considerably."

"President Obama must finally acknowledge it: He doesn't have the means to stop Israel's settlement construction. Washington will no longer insist on a moratorium."

"The about-face in the US Middle East policy may be logical. At no point during the negotiation has Israel allowed the conditions for peace talks to be dictated. And Obama, like his numerous predecessors, has not managed to bring about a rapprochement between the Israelis and the Palestinians -- not through flattery, threats or pressure."

"The peace process will have to hit the 'reset' button once again. But who can, or who ought to take over the role of mediator, if the Americans haven't succeeded? The EU takes a courageous stand on the side of the Palestinians by condemning settlement construction as illegal and demanding fresh talks. Neither EU Commissioner for External Relations Ashton, nor German Foreign Minister Westerwelle appear to have a 'Plan B' up their sleeves. Empty phrases are not enough. The EU must do better than that if it wants to be taken seriously as a mediator."

"In the meantime one can only hope that the radical elements amongst the Palestinians will not take the US about-face as an invitation to launch new attacks, which could lead to the threat of more war in the region. The establishment of a Palestinian state seems far off, even if there isn't a violent confrontation." 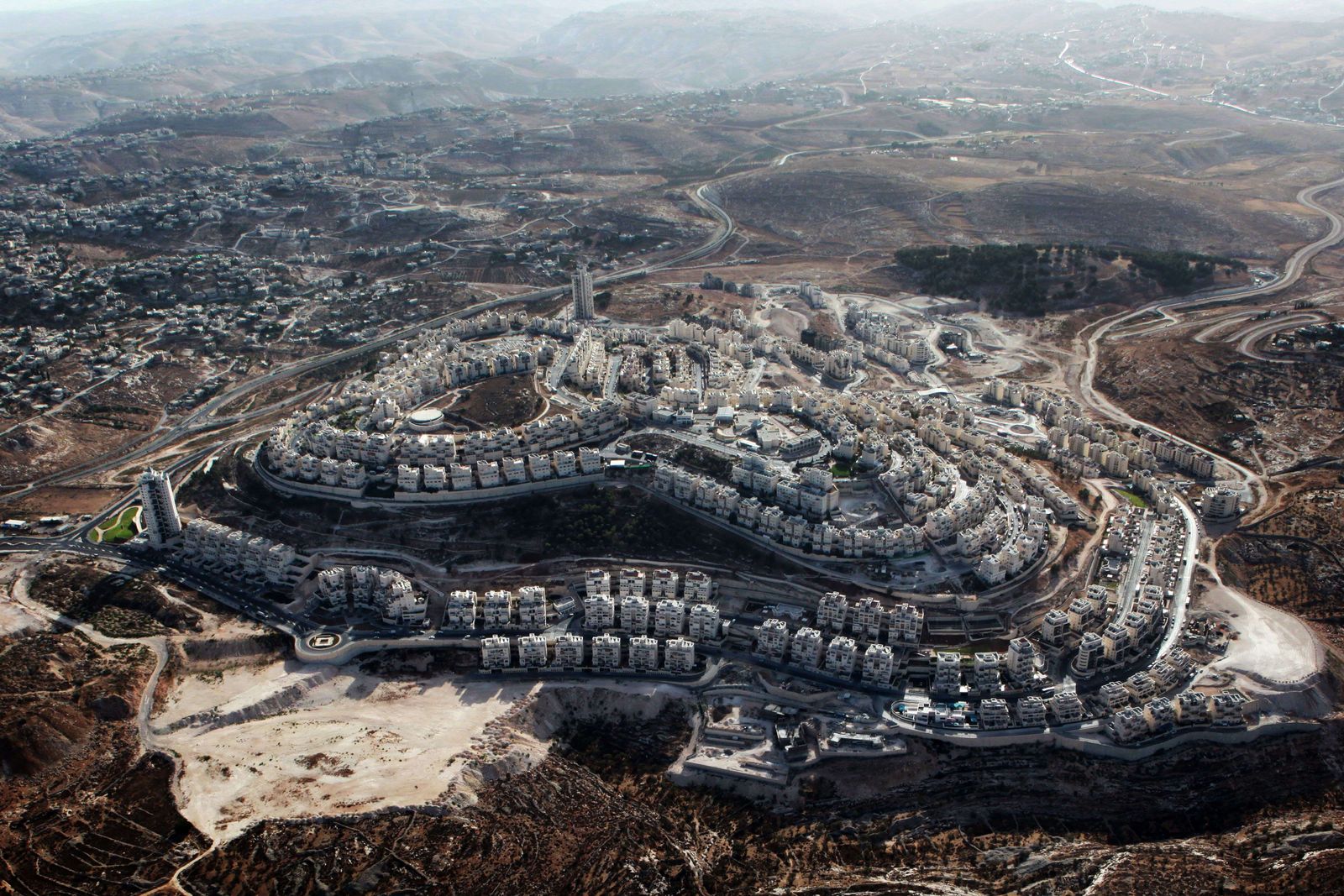 A Jewish settlement on the outskirts of Arab east Jerusalem, near the West Bank biblical town of Bethlehem.