President Barack Obama on Thursday said the United States would shelve controversial plans it had inherited from George W Bush's administration to set up a missile defense shield in the Czech Republic and Poland. Instead, he outlined plans to replace it with a system using smaller radars and sensors and missiles deployed on land or at sea.

News of the decision was greeted with qualified support by leading German politicians. While in Brussels for a special EU summit, Chancellor Angela Merkel said that she saw the decision as "a hopeful signal that the difficulties with Russia might be overcome," adding that she hoped it would lead to stronger collaboration with Russia when it comes to international issues.

The most pressing international issue she was referring to was, of course, Iran's pursuit of nuclear weapons. The US is hoping to convince Russia to support possibly stiffer sanctions against Iran.

Russian President Dmitry Medvedev hailed the decision as a "responsible move." Russia's top diplomat, Konstantin Kosachev, said: "It is a sign that Obama takes our fears more seriously than his predecessor.  Now we can talk about restoration of the strategic partnership between Russia and the United States." But Kosachev added that Moscow was still opposed to new punitive sanctions against Iran.

'A Slap in the Face for Merkel'

Frank-Walter Steinmeier, Germany's foreign minister and the candidate for the Social Democratic Party (SPD) in the upcoming election, interpreted the move as a "signal" that the Obama administration was looking to find "common solutions" to shared threats.

Norman Paech, the foreign-policy spokesman for the Left Party, called it "a wise decision" and said that perhaps this meant that the United States "was finally correctly estimating the danger presented by Iranian long-rang missiles."

Germany's Green Party interpreted the decision as an embarrassment for Merkel and her center-right Christian Democratic Union (CDU) party. "Both Merkel and the CDU are disgraced because they always welcomed and supported Bush's missile defense plans," said Jürgen Trittin, the party's leading candidate in the election. Tritten said that the plan had massively threatened security in Europe and called its cancellation "a slap in the face to the chancellor."

Guido Westerwelle, the candidate for the business-friendly Free Democratic Party (FDP), welcomed the decision as one that fosters "more international trust," and he called on Germany's government to capitalize on the moment to push for the removal of US nuclear weapons based in Germany by 2013.

In Friday's newspapers, German commentators focused on the political risks facing Obama. As they see it, Russia might not interpret the move as a conciliatory gesture to improve strained US-Russian relations but, rather, as a sign of weakness and green light to continue with its aggressive and uncompromising foreign policy.

Click on the image below to launch a SPIEGEL ONLINE Flash animation of the missile shield system as originally planned.

"That the president can venture to cancel the program shows courage, a willingness to take risks and decisiveness, though it might also mean that he's taking a big political gamble."

"Obama's biggest challenge is this: He has to quell the suspicion that he has buckled in the face of Russia. And he has to succeed in doing this not only in the US Congress, but also when it comes to America's allies in Eastern Europe. They are afraid that some people in Moscow will be able to misinterpret the decision to cancel the missile defense shield as a sign of weakness and to be emboldened to promote their interests with tanks in other places in the same way they did in Georgia."

"This is exactly where Germany's government might be able to help Obama. Germany has good relations with the Kremlin. It should show itself as an important neighbor of both Poland and the Czech Republic and that it is willing to listen to their worries about Moscow. Obama will have a hard time completing this transition to a new and more cooperative foreign policy if he doesn't have Europe's complete support."

"(The Czech Republic and Poland) had exposed themselves to a whole lot of criticism from their neighbors to the west, serious threats from Russia and the skepticism of their own populations. But, from now on, they'll give a lot more thought to working closely with America on such controversial issues and the consequences that doing so entails. Obama might have been thinking that canceling the plan would elicit some sort of quid pro quo from Moscow. The Russians are very happy about it, less because it can (presumably) improve US-Russian relations, and more because it means that Russia's tantrum has had its desired effect.  Russia's claim that the planned missile defense system harmed strategic stability was never meant seriously. It was rather intended as propaganda and a way to influence a public that was very touchy about this issue. So this means it pays to play hardball."

"This is another signal that Obama is trying to prioritize confidence-building with Iran. And it fits well with his lofty project of pursuing a world without nuclear weapons. But it does raise the question of whether this policy is naïve and, in the end, dangerous."

"The other problem is that it leaves much of Central Europe disappointed.  People there are afraid of being abandoned again. Sandwiched between Western Europe (Germany, in particular) and Russia, the nations in Central Europe were for a long time the ping-pong ball of foreign powers. Having been admitted into NATO and the EU and having become visible partners with the US raised hopes in these countries that they really counted for something. After Obama's failure to appear at the ceremony marking the anniversary of the beginning of World War II in Gdansk, this will be the second blow to their hopes."

"Those who continue to believe that the freedom movement in the 1980s was right will enthusiastically welcome Obama's decision. But they need to remember just one thing: Communism came to a peaceful end because America was both civil and well-armed."

"The Polish were not overly concerned with the fact that the missile shield was an expensive and most likely senseless American investment. At the end of the day, that wasn't their problem. Poland's goal was to get an American military base. With such a base, the US would have had to defend Poland not only because it was a member of NATO, but also because its military base was there. The majority of Poles are not convinced that NATO lives up to its name of being a 'defensive alliance' anymore. And Poland's government doesn't have much faith in NATO either. If Poland were attacked, NATO members would debate things for two weeks before doing anything to help."

"With no missile shield, there will be no US base in Poland. As a result, Poland's dream of having the US as a power that would protect it is shattered."

"What's truly unusual about Obama's decision is that he is taking a huge step toward Russia without having any guaranteed quid pro quo to show for it. It's a rare thing for a US president to make a down payment like this. It either shows great courage in the face of risk or pure naiveté."

"Just how risky Obama's bet is can be seen from Moscow's celebrations of the cancellation of the missile plans. Diplomats are pounding their chests and boasting that Obama's buckling was the logical consequence of their refusal to compromise on this issue."

"For Obama, it will be a very expensive decision. In terms of domestic politics, he is exposing himself to accusations of being a wimp and damaging the country's security. In terms of foreign politics, he is snubbing two allies -- the Czech Republic and Poland -- who view the cancellation of the missile shield as a betrayal. It would be dangerous for Obama if people got the impression that he had genuflected before the Russians. He has no way of guaranteeing that they will respond to his gesture of friendship. Moscow has the upper hand now."

"From the very beginning, the whole concept of having a missile defense shield in Central Europe was just a big, bad idea. Barack Obama is doing the right thing by pulling the plug on it. Any strategic advantage that would have been gained by the project would have never offset the political damage it would cause. In the end, a defensive shield in Russia's backyard was only a political relic of an era in which the world was divided into friend and foe."

"In political terms, Obama is tossing some inherited ballast overboard -- especially when it comes to US relations with Russia. Just one year after the conflict in Georgia -- which many thought would mark the beginning of a new Cold War -- the relationship between the two major powers has been put on a different footing. The Russians can now feel that their thoughts are taken seriously. And this gives the US some room to maneuver -- especially when it comes to Iran." 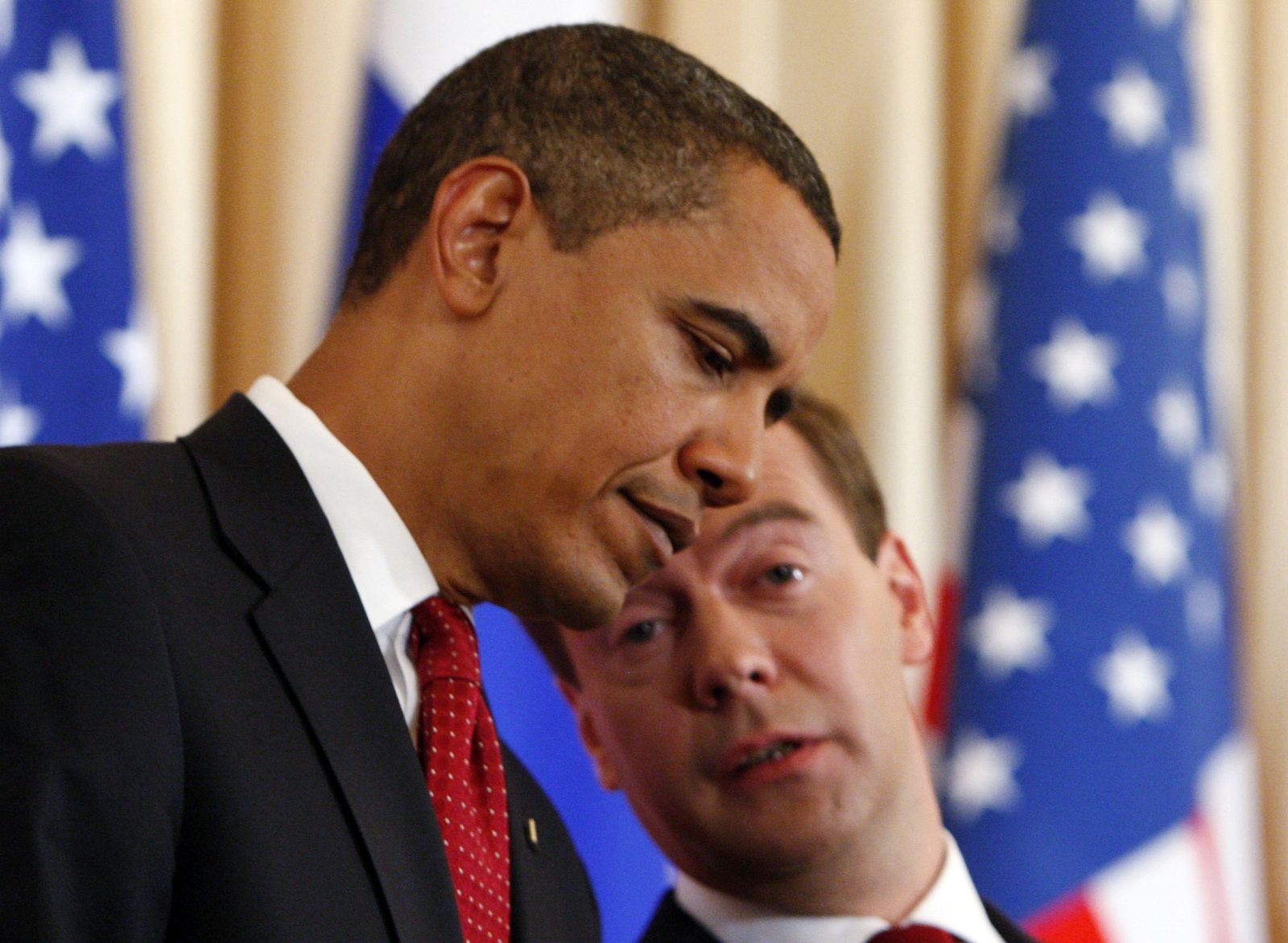