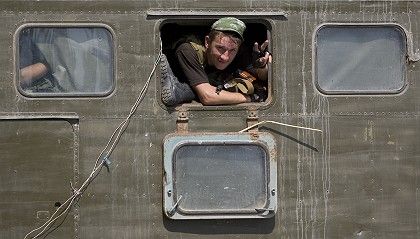 A Russian soldier in a troop carrier departing the Georgian city of Gori on Friday.

The United Nations has had to watch helplessly as Russia, a permanent member of its Security Council, continues its military presence in Georgia -- 10 day after the cease-fire and despite repeated assurances from Moscow that a withdrawal of its troops is imminent.

Late into Thursday night the UN was still deadlocked over the adoption of a resolution on the issue and after a two-hour meeting behind closed doors, the council had failed to reach any decision. Russia is pushing for a speedy adoption of its draft resolution which basically just restates the six-point peace plan that both Russia and Georgia signed last week.

The US, France and Britain, though, want language forcing Russia to withdraw immediately from Georgia and to recognize Georgia's territorial integrity. There seems little ground for compromise between the two positions. Tbilisi has criticized the cease-fire for being too ambiguous, and essentially allowing Russian troops to do what they like within Georgia.

In Georgia on Friday, little seemed to indicate that the Russians were preparing to depart, despite assurances from Moscow that the military would be out by the end of the week. Russian troops continue manning checkpoints and digging trenches in many parts of the country. Gen. John Craddock, head of the US European Command, said on Friday that if the Russians were leaving "it is at a snail's pace." In Georgia on a two-day assessment trip, Craddock said "It is far too little and far too slow."

Russia has said it will keep its troops in South Ossetia, the breakaway province Georgian troops marched into on Aug. 7 in an attempt to regain control, as well as in a buffer zone in Georgia proper. On Friday Anatoly Nogovitsyn, deputy chief of the Russian military's General Staff, said that the buffer checkpoints being built near South Ossetia would be "permanent," as part of Russia's "peacekeeping function." According to the terms of the Paris-brokered cease-fire, Russia was to be allowed a security zone but only until international monitors could get to the country.

Alexander Lomaia, Georgia's security council chief, has slammed the ongoing Russian operations within his country, particularly its control of key highways. Speaking to the Associated Press on Friday he claimed Moscow wants to "suffocate us economically."

The conflict has severely strained Russia's relationship with the West, and the wider geo-political ramifications are slowly being felt. This week Poland signed up to a stationing part of a US missile defence on its territory, a move once deeply unpopular among Poles but now openly embraced in the light of Moscow's aggression in the Caucasus. On Thursday, Russian President Dmitry Medvedev hosted his Syrian counterpart Bashar Assad for talks on a weapons deal, despite the fact that Washington had warned Moscow against selling arms to Damascus.

Also on Thursday, Russia announced that it was freezing some cooperation with NATO, though it is not yet clear if this will have an impact of the transit of Allied troops through Russia to Afghanistan. Russian Foreign Minister Sergey Lavrov told reporters on Thursday that Russia was not "closing the doors" on cooperation with NATO but he added: "It all depends on NATO priorities: if they prefer to support the bankrupt Saakashvili regime to partnership with Russia, that will not be our fault."

On Friday German commentators, like the rest of the world, try to work out what Russia really wants.

"Russia is pursuing a salami tactic with its withdrawal. No one knows whether this will be sufficient to live up to the terms of the cease-fire negotiated by the European Union."

"Mistrust has only been deepened. (German) Foreign Minister Frank-Walter Steinmeier is aware of the consequences and has already cancelled an Africa trip. While it is clear that a military withdrawal can drag on, Russia has to be careful not to provoke the West too much and in particular not to jeopardize the relationship with the EU. Moscow cannot really want that."

"The hope that Russia would bid permanent farewell to its superpower role was always dangerously naïve. Today's Russia has nothing in common with the sleepy colossus of 20 years ago, which was exhausted by failed socialism and helplessly allowed every degradation. The new Russia is different: It draws its strength from natural resources and doesnt want to be treated like a 'third class power' anymore, in the words of President Medvedev. The new Russia  dreams of a world where the importance of the United States is diminished and new alliances replace the American supremacy.... Long before the Georgia crisis, Moscow had started to look for new allies."

"Russia is choosing its friends on pragmatic grounds. At the moment this means in particular countries that have not found a place in the Western alliance. Unlike the Soviet Union, Russia's desire to be a superpower is not based on ideology -- there is no worldview that has to be exported. Russia's return to a place in the sun is occuring via strategic alliances in the style of the 19th century and not of the Cold War."

"If Moscow really annexes South Ossetia and recognizes Abkhazian independence, then the Russian leadership will have destroyed the last remaining sympathies in the EU. The destruction of Georgia's military and civilian infrastructure under the protection of the 'cease-fire' has made it extremely difficult for Germany and France to plead for a policy of dialogue with Russia. If it recognizes the two breakaway Georgian provinces, then Russia will have crossed a red line."

"The step would be a completely unnecessary provocation.  Russia has for years cooperated with the regions on a level that is the equivalent of recognizing independence. In Europe, diplomats have long been aware of this, knowing full well that the chances of a peaceful return of the provinces to Georgia were extremely small. Time was obviously on Moscow's side."

"But the leadership there is now continuing to rampage through the political china shop and is achieving the opposite of what it had been striving for: its recognition as an equal player on the world stage. Russia may well have arguments to back up its position -- but it is gambling away its credibility and intimidating its allies. The West should not accept this silently, but it should keep its cool. The world order is not going to be changed by the 'independence' of two pieces of land in the Caucasus. Russia may well be triumphant now. The bill for its occupation is still to be presented to Moscow."