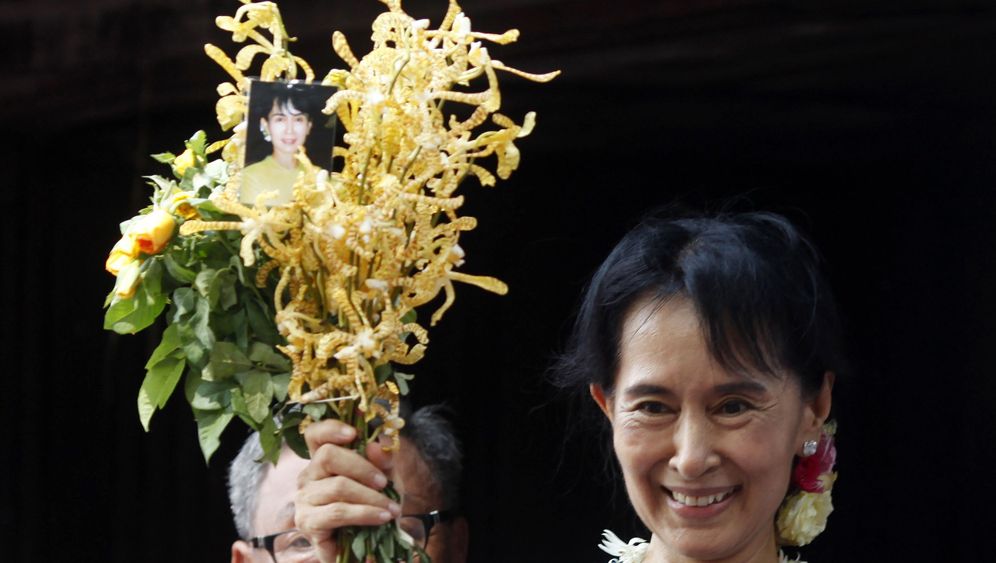 Suu Kyi wasted no time in restarting her campaign for a peaceful revolution in Burma, also known as Myanmar. "We must work together," she told thousands of cheering supporters on Sunday. "If we want change we have to do it ourselves."

The recent Burmese ballot, which Western observers said was far from fair, was won by the biggest military-backed party, the Union Solidarity and Development Party.

Although Suu Kyi stressed she was open for dialogue, Than Shwe, commander-in-chief of the Burmese army, has not kept quiet about his dislike of Suu Kyi and he cannot even bear to hear her name. His aides are only allowed to mention her as "The Lady."

On Monday, news wires reported that the pro-democracy leader had started work, liaising with lawyers about how to make her former party, the National League for Democracy, legal once more. As a result of her struggle for human rights, Suu Kyi has been locked up for more than 15 of the past 21 years. Fear of being detained again for her opinions would not deter her from speaking her mind, she told her supporters on Sunday.

While international leaders welcomed news of her release, with US President Barack Obama describing her as a "personal hero," there remain doubts about whether she can mobilize change in her highly restrictive home land.

"The Burmese military regime is taking a risk by releasing Aung San Suu Kyi. The Nobel Peace Prize laureate may be just a 'private person' representing an obsolete political group (the National League for Democracy). But that fact has not deterred thousands from cheering in front of her house. And no one is expecting that 'The Lady' will retreat into her private life. She will want to get politically involved -- and her voice will be heard in a country which has witnessed decades of periods of fierce repression alternating with periods of slightly less fierce repression. People want change."

"It would be too early to call this a big victory for the democracy movement and the country's 2,200 political prisoners -- or to interpret it as a weakening of the regime. The military leadership of Myanmar would not have let the activist go if the move posed a risk. There are supposedly no conditions attached to Suu Kyi's release. However, that situation could change quickly. Over the past 20 years the Nobel Peace Prize laureate has been repeatedly locked up or placed under house arrest when she overstepped the regime's limits."

"The generals apparently feel secure following the manipulated elections of Nov. 7.... But the strength of the military junta is also dependent on external factors -- and there Myanmar has little to fear. Western states voiced their satisfaction with the decision to release Suu Kyi. But the Buddhist monks' uprising (three years ago) showed that outrage about human rights abuses is just a ritual which doesn't change anything. The West does not want to annoy the gas-exporter Myanmar -- and especially not its powerful protector China. Peking once again promised the military leaders its full support after the recent election. As long as this continues, any criticism of the regime's politics remains toothless."

"Burma is and remains a repressive state. People suffer under the government and the sanctions -- and nothing is set to change on either of these fronts in the near future. The generals made sure to avoid a disgrace similar to that of 20 years ago when Suu Kyi's party won the elections. This time, the regime massively influenced the ballot. In addition, the junta managed to divide the opposition merely by calling a national election. All of that makes the situation facing Suu Kyi more difficult."

"As a prisoner, she called for a boycott of the vote. But as an activist at the forefront of the fight for human rights, she now has to work with members of the opposition who went against her call to skip the election. During Suu Kyi's long imprisonment a new, more pragmatic opposition has grown up, people who want to change Burma from within the existing system. Despite recent years of forced isolation, Suu Kyi seems to have understood this. She is looking for dialogue -- in all directions. That is a good move. Burma's opposition has too little room to maneuver to make life more difficult for itself. In Burma, patience is required."

"Aung Suu Kyi's release is reason to celebrate. But it is not a signal that Burma is becoming more democratic. On the one hand, the regime locked up the opposition politician in the first place. On the other hand, there are still more than 2,000 political prisoners behind bars in Burma -- and the human rights abuses are still going on."

"Playing into the junta's hand is the fact that there are too many expectations resting on Suu Kyi's shoulders. Many people think the graceful woman with the iron will is the only person who can unite the fragmented opposition and oversee a reconciliation with ethnic minorities. Such a task however is too gargantuan for a single person. Especially for someone whose freedom rests on the goodwill of an appalling regime."