Brazilian President Lula da Silva and Turkish Prime Minister Recep Tayyip Erdogan on Monday announced a surprise agreement with Iran that would see Tehran shipping around half of its nuclear fuel to Turkey. In exchange for 1,200 kilograms (2,650 pounds) of low-enriched uranium it would send to Turkey, Tehran would be entitled to get about 120 kilograms (265 pounds) of unranium enriched to 20 percent from France and Russia -- fuel it needs to operate a research reactor that produces isotopes for cancer patients. That level of enrichment is also far greater than the 3.5 percent enrichment possible in Iran's own production facilities.

The move is seen as a bold one for Brazil and Turkey, two aspiring powers that have gained significant international stature in recent years. The deal also comes at an inopportune time for US President Barack Obama. The United States wants to push for more sanctions against Iran in the United Nations Security Council, and the deal comes just weeks before Washington is expected to move on the issue.

Despite the deal brokered on uranium swaps, though, Iran insists that it will continue with its efforts to develop its own uranium enriched to 20 percent. The country has long claimed it needs enriched uranium for its civilian nuclear program, but most Western countries believe the regime in Tehran is trying to collect the material it needs to build a nuclear bomb.

In Germany, Chancellor Angela Merkel's deputy spokesman, Christoph Steegmans, noted on Monday that Iran must adhere to agreements made with the International Atomic Energy Agency (IAEA). He said the decisive point would be whether Iran abandoned its own efforts to enrich uranium.

European Council President Herman Van Rompuy said Iran has done nothing to eliminate the suspicion that it is secretly working to develop a nuclear weapon. A French Foreign Ministry spokesperson also argued the deal would do nothing to address the primary problems in Iran: the uranium enrichment program at Natanz and the heavy-water reactor being built at Arak.

A deal similar to Monday's brokered in October by the United States, Russia and France would have provided the nuclear fuel Tehran needs to treat its cancer patients while at the same time depriving it of the amount of enriched uranium it would need to produce a bomb.

In the German press on Tuesday, many newspaper editorialists weigh in on a shifting balance of power in global politics that has seen the rise of countries like Brazil and Turkey. But they also share the view that this is a dupe on the part of Iran and that Tehran is continuing with its alleged efforts to build a bomb.

"How long will Iran's compromise last this time? According to the new agreement with Brazil and Turkey, Tehran will be exchanging its uranium on Turkish territory for more highly enriched Russian and French fuel. It seems likely that it will, yet again, only take a few months until their tactics become obvious."

"But this time it's not only about the obligatory question of the political half-life (of the move). With this agreement, Turkey and Brazil are making their international political ambitions clear. Naively, we still like to look down at them, considering them to be developing nations that are wannabe global powers. The reality looks very different, though. Brazil is, in fact, the leader of a continent, and Turkey is beginning to play a similar role in the Middle East. Both want to produce nuclear power themselves and are currently rotating members of the UN Security Council."

"With this agreement, Tehran is succeeding in duping the Western nations. It's a diplomatic success, in which more moderate voices pushed through a deal in the end despite the hardliners, who didn't want to make any concessions over their nuclear program. But in the end they hardly need to: The agreement is in principle the same as what Germany and the permanent members of the United Nations had brokered with Iran some time ago. The Iranians simply haven't implemented it."

"A credible agreement could only look like this: uranium enrichment in foreign countries, unannounced access to Iran's nuclear facilities for international atomic inspectors and, in exchange, help with power plant construction in Iran."

"Iran is softening its tone over its nuclear program. This is excellent news because, in the dispute over its presumed or actual nuclear production capabilities, it seemed as if a new war was drawing closer. Even though Western governments are skeptical and want to know exactly what was agreed to Monday between the three nations, this shows that diplomacy still has a chance."

"The agreement is an important first step because it again establishes a dialogue between Iran and parts of the UN Security Council."

"Brazil and Turkey are currently non-permanent members of the Security Council. And Brazil's da Silva and Turkey's Erdogan have long stated their opposition to sanctions or even military action against Iran. Despite their intermittent frustration over the disunity and volatility of the Iranian leadership, the Turks have been steadfast in their conviction that there must be a diplomatic solution and that talks should continue in spite of all the objections to Ahmadinejad."

"Following this initial achievement, the ball is now in the court of the IAEA and the veto-holders on the Security Council. One must hope that they proceed along the path paved by Turkey and Brazil."

"Iran has so often promised something with respect to its nuclear program only later to declare that it didn't truly mean what it said. Besides, Iran would have to halt domestic uranium enrichment and sign a contract with the IAEA. Only then could one speak of a breakthrough."

"Still, the chances of success this time around are not as bad as before. Iran is already under pressure due to the existing sanctions, and newer ones would only increase Tehran's current political and economic problems. Moreover, it could provide the Iranian leadership with a face-saving opportunity: After all, the treaty wasn't negotiated with the evil West, but with Turkey and Brazil, two countries that enjoy good relations with Iran."

"For its part, the US has said that the Security Council will agree to tougher sanctions against Iran by the end of May -- a development that now seems unlikely. But the West hasn't offered any alternative program, either. That's why they should be pleased by the treaty -- or at least the time bought by it -- and show more optimism. More, at least, than is signaled by their initial skeptical and critical reactions."

"The 1,200 kilograms of low-enriched uranium that Iran is supposed to give up, would have been more than two-thirds of the country's supplies if it had happened last October. But now it is only half (because of Tehran's own continuing enrichment efforts) -- and Iran would therefore keep enough to build at least one nuclear bomb. Erdogan and Lula didn't even succeed in securing a promise from Ahmadinejad that Iran would abandon its efforts to create highly enriched uranium."

"No one in Europe or the United States has anything against Turkey or Brazil coming up with a creative effort to solve the nuclear dispute. But if they allow themselves to be deceived by the regime in Tehran, it will do little to improve the reputations of these rising powers."

"The parallels between then and now are not entirely complete. Lula da Silva's Brazil, which assumed the lead in negotiations in Tehran, was never part of the Non-Aligned Movement. And the Turkey of Erdogan is a member of NATO and is seeking membership in the European Union. What does unite both, though, is that as non-permanent members of the UN Security Council they do not want further sanctions against Iran to be passed. They are joined by India, Indonesia, Malaysia, Nigeria, Kenya, Argentina and other members. Veto powers Russia and China weren't present in Tehran, but they do not want to see any consolidation of the American position in the region, either. Even the foreign minister of the US client state Egypt helped prepare the (Tehran) meeting."

"Doubts remain as to whether Iran will actually deliver the fuel, and especially over whether Tehran will now end its enrichment program as the UN has ordered it to do in three resolutions. If that were to happen, everyone would be happy -- except, perhaps, for those who would prefer to see the situation escalate rather than be resolved." 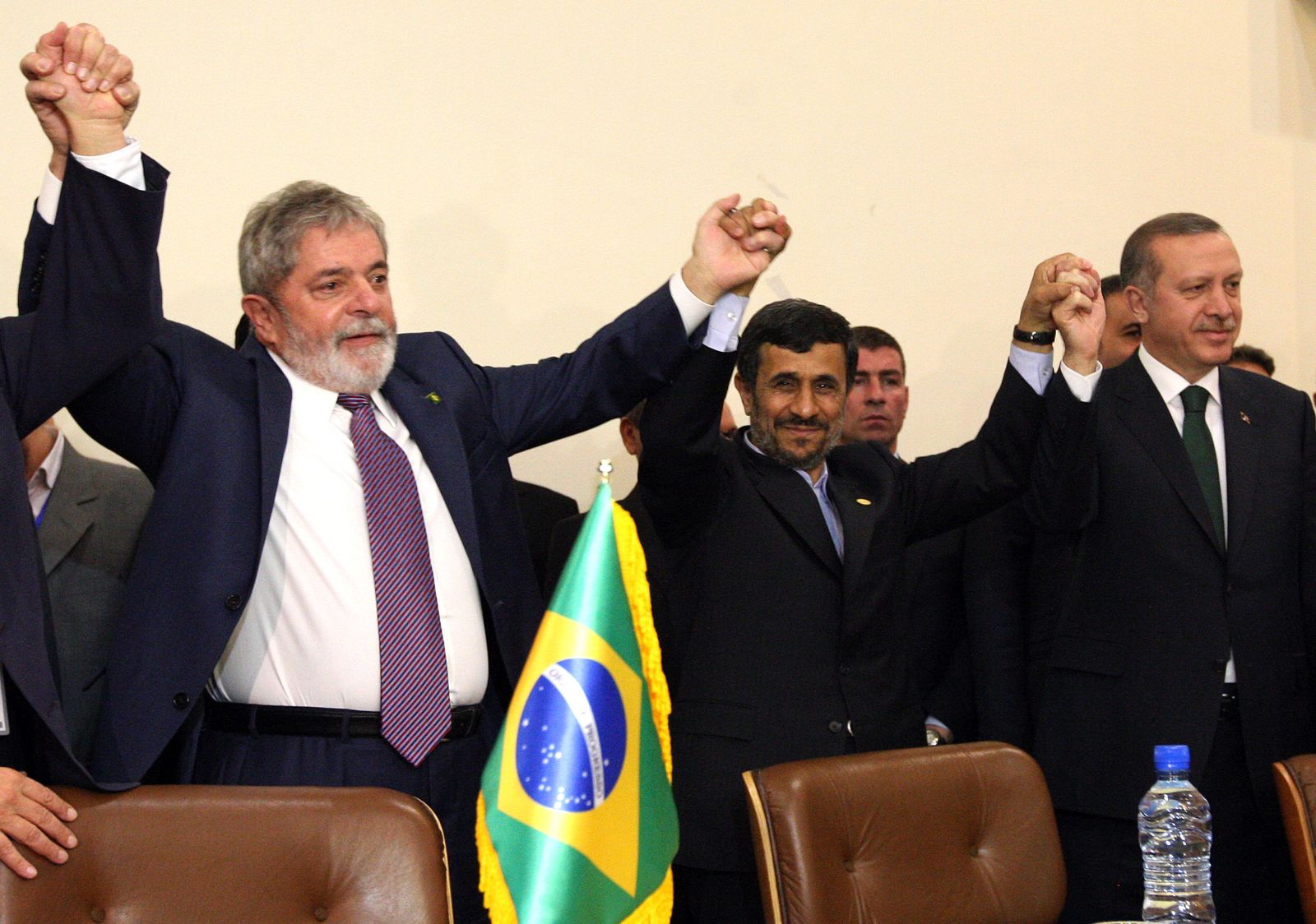