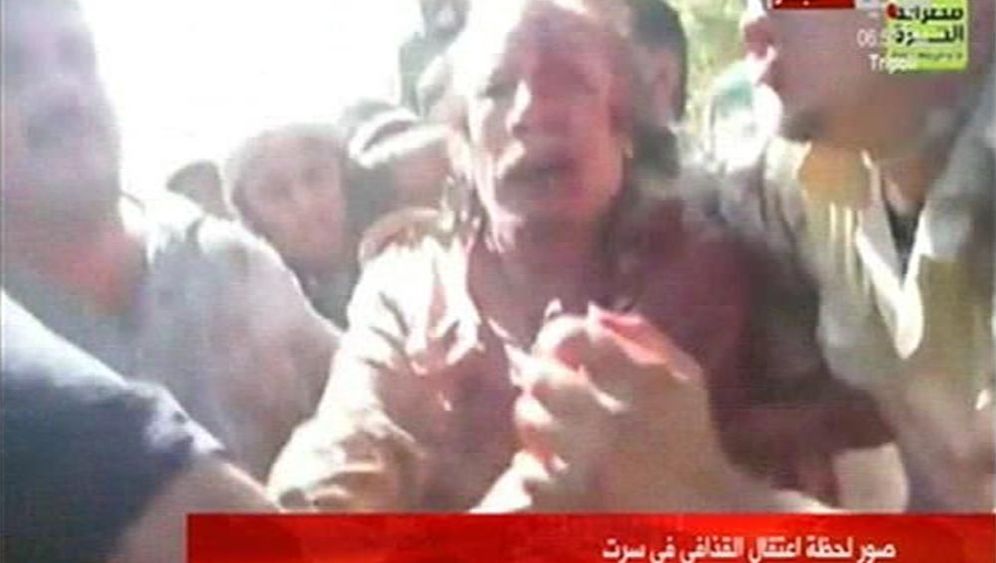 The day after the death of longtime Libyan dictator Moammar Gadhafi, the precise details of his demise remain unresolved. His body has been taken to Misrata, but it remains doubtful that an independent investigation into the cause of his death will ever be undertaken.

How did the 69-year-old despot really die? And who fired the deadly shots at him? What happened to his corpse?

National Transitional Council leaders are defending themselves against allegations that their fighters executed a Gadhafi who had clearly already been wounded. Prime Minister Mahmoud Jibril has stated that Gadhafi suffered a deadly bullet strike in the head during crossfire between government fighters and his own supports. A doctor had been unable to determined which side fired the deadly shot. But the New York Times is reporting forensics experts saying the shots were at closer range, indicating that anti-Gadhafi fighters might have executed the former leader.

A number of accounts are circulating. One alleged witness told Reuters that it was one of Gadhafi's own men who shot him. Others claim the despot had already been injured in a firefight at his last hiding place in Sirte, had fled in a convoy and then died of his original injuries as he was taken away in an ambulance.

Jibril said the National Transitional Council had taken up contact with the International Criminal Court, which has asked the Libyans not to bury Gadhafi yet so that his corpse can be examined. But the Transitional Council has decided not to observe its wishes, with plans to bury Gadhafi on Friday according to Islamic tradition. However, doctors did take hair and tissue samples in order to ensure there is no doubt that the dictator is dead.

On Thursday, a convoy of around 80 cars had sought to flee Sirte. It was attacked by an American Predator drone and a French warplane, according to media reports. French Defense Minister Gerard Longuet said the strikes had "stopped" but not destroyed the convoy. Anti-Gadhafi fighters arrived at the scene and Gadhafi reportedly sought to escape in a large drainage pipe.

German commentators on Friday take a closer look at what Gadhafi's death means for the future of Libya.

"The end of the Gadhafi era is a reason to celebrate in the region -- for most, at least. For some, though, like (Syria's) Bashar Assad and (Yemen's) Abdullah Saleh and other old-school Arab leaders still in power, Thursday marked a black day. It made clear that the end is near for them."

"Of course, regrets will also be expressed. Many wanted to bring him to trial, either at the International Criminal Court or before a Libyan court. They would also have liked to see those who helped him throughout the years in court too. That included both his Libyan supporters, but also those in Europe and the United States. The relationships in recent years had become increasingly intimate and the criticism of his ruling style ever quieter. Certainly some interesting things about European politics would have come to light. It is too bad this can't happen, but there is also a positive side: An imprisoned Gadhafi would certainly not have missed a single opportunity to create further unrest and confusion."

"Like Iraq's despot Saddam Hussein, Gadhafi hid away in his own country. And like Saddam he was a victim of his own propaganda, his own detachment from reality, the erroneous belief that the masses were still standing behind him."

"As of Thursday, the war is over. Libya can briefly celebrate and take a deep breath. The Libyans must then, however, start formulating the future. Because after Gadhafi's death, there is a real danger of a split in the National Transitional Council, a fight between regional interests or even all-out tribal warfare. The common enemy Gadhafi has united the rebels until now. But behind the scenes, fractures in the anti-Gadhafi front have already been visible."

"But despite all the fears and dangers, it was only Gadhafi's final defeat which could clear the way for building a new, democratic and free Libya out of the rubble of Gadhafi's despotic republic."

"It must be hoped that the post-Gadhafi Libya does not repeat the mistakes of Iraq following the fall of Saddam Hussein: If Gadhafi's supporters -- including his thugs and those who profited from his system -- are not integrated, there is the threat of lingering ethnic conflict, civil war and terror. The only way to avoid that is a broad political coalition and economic prosperity. Libya is rich in oil, and the country must use this lubricant for wealth."

"Almost instinctively one understands that the world is a better place without the Saddam Husseins, Osama bin Ladens, and Moammar Gadhafis. And still one wishes that Gadhafi, like Saddam, had been forced to answer in court for his many crimes. Either in Libya itself or in front of the International Court of Justice in the Hague."

"(After the Lockerbie bombing), the West turned on Gadhafi and isolated him. That ended in the new millennium, when Gadhafi took responsibility for Lockerbie and apologized to the victims, and because he came to an agreement with the US and Great Britain to bring an end to his program for developing chemical and nuclear weapons. This agreement paved the way for the normalization of Libya's relations with the rest for the world, and for a disgusting competition among Western countries for Libya's resources."

"Those who didn't have a role in any of this were the Libyans themselves, who, after the revolutions in Tunis and Cairo, rose up. The fact that, in the end, it was the West who helped bring down Gadhafi seems somehow fitting for a life that was defined, above all, by a hatred of the West. And it raises the question of whether or not it would have been better for Libya and the rest of the world if the West had taken on this dictator earlier and more decisively."

"Gadhafi's death brings to an end a dark chapter in Libyan history. Now the path is open to building up a free and democratic country. It is a chance for which the Libyans have fought hard, but could also easily throw away."

"For Gadhafi, death -- whether from a rebel bullet or NATO helicopter fire on his convoy -- was a more sensible end than capture. But not just for him. The victors are likely relieved as well. What, after all, would they have done with the fallen dictator? Vengeful justice would not have been to the taste of their allies. But a fair trial in Libya is inconceivable.... There is more historical justice in the fact that Gadhafi, who took power by the force of arms 42 years ago, also died by force of arms."

"With the events in Sirte comes the moment of truth for the provisional government. The victory over Gadhafi doesn't solve the problems facing the country. They are just beginning...."

"With the end of the fighting and Gadhafi's defeat, the provisional government can no longer delay in forming a proper government. It won't be easy. Too many diverging forces want a slice of power -- and a share of Libya's wealth. There are traditionalists and liberals, democrats and Islamists, businessmen and tribal chiefs. Success is anything but guaranteed. And there is also a lot at stake for the country's Western allies."

"Gadhafi's death is the end of the Libyan chapter of the Arabellion. It remains to be seen whether the end of the dictatorship will also be the beginning of peace and tranquility. Recently, battles between the Transitional Council's troops and Gadhafi supporters have once again flared up in Tripoli -- and these probably aren't just isolated cases of profiteers from the old system. It may well be that tribal loyalties are playing a role -- and the debate over who gets what share of power in a Libya that has for centuries been divided into three distinct regions. Even among the erstwhile rebels' political and military leadership ... there is no small number of people who were loyal to Gadhafi over the years. That is not a badge of democratic orientation and it doesn't bode well for peace. The birth of new Libya will not be without pain."

"Gadhafi's era is irreversibly finished. That is certain. But will democracy prevail in Libya? We'll have to wait and see. Much suggests that this question isn't very important to the NATO countries which helped along the change in power. As long as it appeared to be opportune for them, they accepted and armed both Gadhafi and Saddam Hussein as allies. As soon as it no longer appeared opportune to them, they began pointing out the -- indisputably -- disastrous human rights records of both leaders. They could always count on one thing though: The public at home would accept any change of course because, at the end of the day, they weren't terribly interested in what was going on in far-away countries."

"The idea that Libya has been 'liberated' because the West has unflinchingly pushed for adherence to human rights is absolute nonsense."

"The (West) first took an interest in the hurdles facing democratization in Egypt when they started to effect Christians in that country. Earlier, politicians really didn't care that the country was still in a state of crisis, that civilians were being tried in military courts and that the military still has a hold on power. Furthermore, before the so-called 'Arab Spring,' many had decided that Arabs, because of their culture and mentality, weren't ready for democracy."

"It won't take long before Western politicians begin ... saying the same thing about Libya if it suits them. Those trying to build a democracy would be well advised not to rely on the West's solidarity. This applies globally."

"The transition from dictatorship to a free, democratic society has yet to come. And the next phase of change will not be made any easier by the fact that the common enemy -- Gadhafi -- is now gone. He held the various rebel groups together."

"The success of the revolution depends on whether constitutional measures to deal with Gadhafi loyalists succeed, whether rebels can be disarmed in an orderly manner and whether Islamists can be integrated. It is also crucial for society to succeed in channelling the desire for vengeance and justice. Gadhafi brutalized Libyan society. He leaves behind a country without civil society, without political parties, without political life. Libya is starting from scratch."