The results of Afghanistan's latest presidential election have become a serious problem for both the incumbent Afghan President Hamid Karzai and those Western governments invested in the war-torn country's future. After votes were cast on August 20, widespread accusations of fraud emerged.

On Wednesday, European Union election observers reported that as many as one-third of the votes cast were suspect. Of nearly 6 million votes, 1.5 million were suspicious, the European Commission announced. An election monitor said 1.1 million of the suspect ballots were votes for Karzai, and 300,000 for his closest opponent, former Afghan Foreign Minister Abdullah Abdullah.

The latest numbers show Karzai leading with 54 percent of the vote, but discarding the ballots that show obvious problems could bring his total under 50 percent, which in turn would require a runoff election.

The elections present a problem for Western governments struggling to defend their involvement in Afghanistan to increasingly skeptical voters at home, particularly as casualties rise and the security situation in the country deteriorates. German commentators saw the latest developments as a grim portent of further trouble to come.

"As many as one-fourth of the ballots cast in Afghanistan's election were falsified or tampered with, according to EU observers. That is disastrous. It raises the question -- can the international community work with Karzai, apparently the main beneficiary of the fraud, in all good conscience? And it undermines the legitimacy of the country's central government externally as well as internally. Two questions need to be answered: Is there an alternative to Karzai? The Afghans themselves need to answer that question, with as little interference from outside as possible. But that could lead to violent conflict, which raises the second, and most important, question: Is it smart, in an unstable country with different codes of governance, to promote voting as the central tenet of political legitimacy? Instead of plunging the country into conflict with an election campaign, perhaps it would have been better to strengthen the rule of law and energetically fight corruption."

"The presidential election in Afghanistan on August 20 could go down in the history books as the beginning of the end. The day that Afghanistan was lost. The day a civil war developed. The day that the export of democracy at gunpoint ended. And the day that NATO underwent the biggest defeat since its inception. That is why western diplomats and military forces put so much energy into making sure the results were correct -- even though they didn't know what the correct results would mean for Afghanistan."

"But even when forgeries are spotted and votes recounted, even if there is a halfway clean election result, the country is still slipping steadily into a civil war. Karzai and his followers, mostly among the Pashtuns, would not accept a defeat. The whole Karzai system of corruption, bribery and nepotism would collapse and many of his profiteers would lose their incomes. And the Pashtuns would never let themselves be ruled by Abdullah -- he is a Tajik, after all."

"In principle, this election is significant for two reasons: For one thing, it shows how bad the situation in Afghanistan really is. For another, it exposes the hypocrisy of western governments who consider the act of voting alone as a measure of democratic progress."

"This election has to be annulled. Doing so won't help advance Afghanistan. But it may stop it from sliding back into the chaos of decades past."

And the center-left Süddeutsche Zeitung writes:

"It would be better to leave the decision about what to do next to a Loya Jirga, a traditional Afghan council of elders. This has traditional legitimacy in Afghanistan. But the elders love to debate issues endlessly. It will be winter before they make any decisions. That has just one advantage: In winter there won't be any fighting in the Hindu Kush, for a few months at least. The icy weather turns even the fiercest Taliban into part-time pacifists. That might give the authorities in the US and Europe time to think hard about war and democracy in Afghanistan." 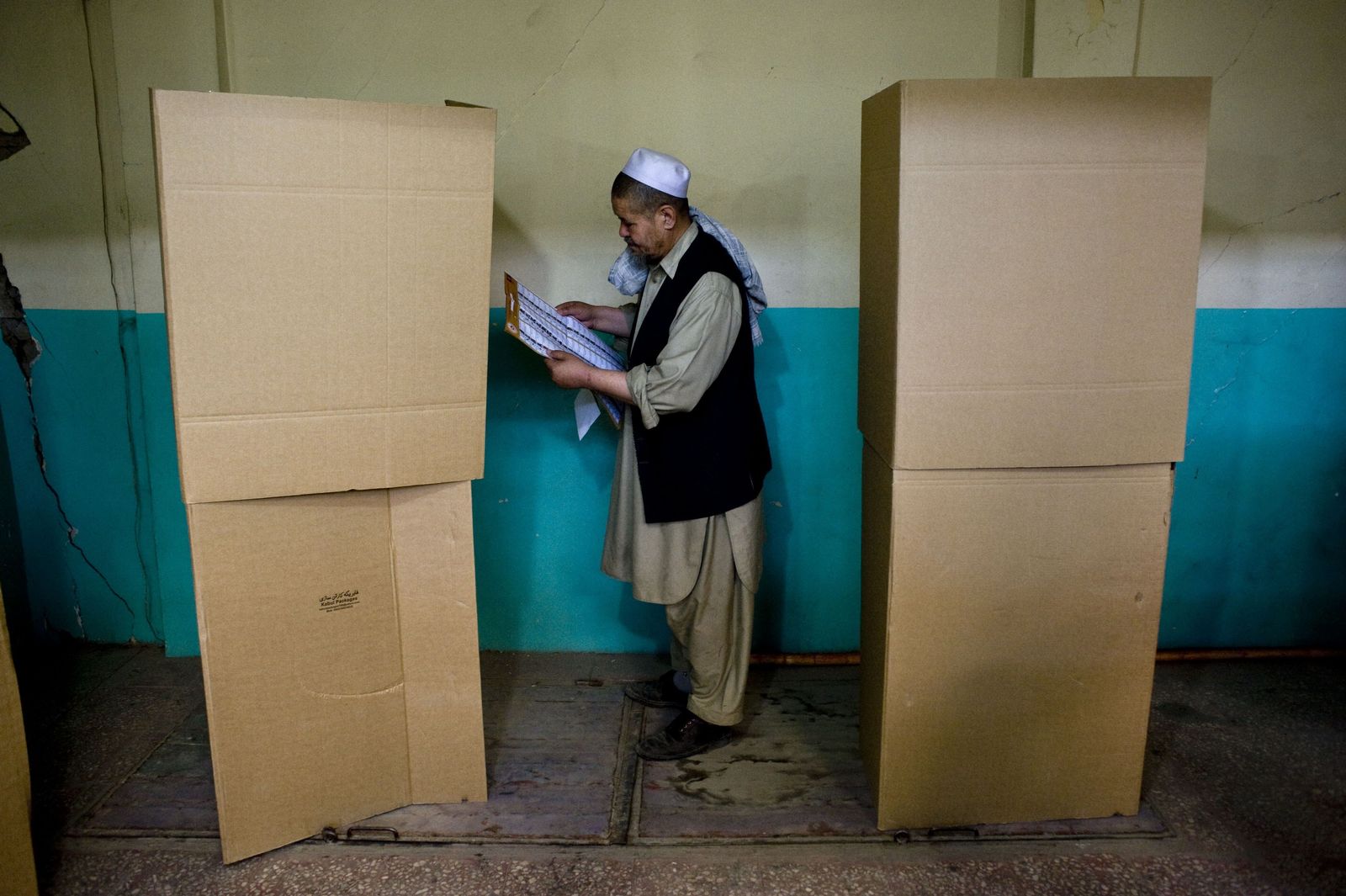 An Afghan man checks the list of candidates before casting his vote inside a polling centre in Kabul on August 20, 2009.