The agreement to transfer 17 Uighur inmates from the Guantanamo Bay detention camp to the Pacific island nation of Palau serves almost as a punchline for months of ticklish diplomacy between Washington and Berlin. For most of the year officials in Berlin have been debating whether they should let the inmates resettle in Germany. 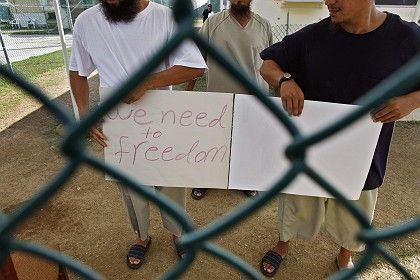 Uighur detainees at Guantanamo show a protest sign to the media in this June 1 photo.

But on Wednesday the president of Palau, Johnson Toribiong, said his tiny state would accept the Uighurs as a "humanitarian gesture." His government will now receive some $200 million in fresh aid from Washington, though Toribiong as well as US officials deny there was a tit-for-tat deal.

In 2004 the US government cleared the Uighurs, who it does not consider "enemy combatants," for release. But China insists the Uighurs, who belong to a mainly Muslim minority in northwestern China, are separatist terrorists -- which means they could be tortured if the US ships them home to Xinjiang province. Resettling them in America proved impossible after a revolt by congressional Republicans, who mounted a not-in-my-backyard campaign to question the Uighurs' fitness to live peaceably in the US.

Since January, just before Barack Obama's inauguration, the German government has been debating whether it should accept all or some of the 17 inmates as a goodwill gesture to help the new government close Guantanamo. Munich has a large Uighur community, and the left-leaning German foreign minister, Frank-Walter Steinmeier, has -- at least until recently -- been eager to work with Obama on the issue. But the conservative interior minister, Wolfgang Schäuble, wondered why Germany should help solve America's self-inflicted legal problems by accepting the detainees. Possible diplomatic trouble with China over hosting the Uighurs seemed to unsettle everyone in Berlin. But this week -- with help from Palau -- the matter was laid to rest.

Palau has been a colony of Spain, Germany and Japan, but after World War II it spent decades as a "trust territory" of the United States until it gained independence in 1994. The Uighurs themselves reportedly don't want to go there. But an American lawyer who acts as Palau's ambassador to the United Nations, Stuart Beck, insisted to the New York Times on Wednesday that it was a nice place to live. "What they will encounter in Palau is paradise," he said.

German commentators on Thursday morning see the collapse of goodwill between Washington and Berlin as a function of partisan politics and other narrow self-interests.

"An aid package of $200 million is under discussion, which would amount to an astonishing $10,000 per person in Palau -- significantly higher than the island's annual per capita income. More important, though, is that America has strengthened its security guarantees for the small nation, which  largely relies on Washington for its defense."

"Obama has apparently been forced to resort to a tactic that helped George W. Bush before the Iraq invasion. When important Western allies won't cooperate, Washington turns to countries in need of protection. In the Iraq war it was mainly Eastern European and Asian countries (including Palau) that wanted to protect themselves from Russia or China by having a close relationship with Washington.

"Now Palau will accept a large portion of the 50 Guantanamo detainees that have been declared by the Americans to pose no security risk. Unlike the Iraq war, of course, the decision to close Guantanamo has been universally hailed by European governments. But so far it hasn't helped Obama."

"The Uighurs  are not charged with any crime and had the label of 'enemy combatant' lifted in 2008. The idea of resettling them in the US failed not because of any known facts but because of a hysterical campaign."

"Schäuble has based his rejection partly on the claim that the Uighurs had no personal connection to Germany. This isn't true. Munich has the largest Uighur emigrant community in Europe. Uighur life prospers there. Uighur business owners in Munich have promised to help the inmates find jobs."

"Schäuble's shabby delaying tactics can have only one source -- the claim by the Chinese government that the Uighurs are terrorists. If that's true, then why not send them home immediately?"