Countries from around the globe agreed on Sunday to forge a new deal forcing all the biggest polluters for the first time to limit greenhouse gas emissions. A package of accords agreed after two weeks of United Nations talks in Durban, South Africa, extended the 1997 Kyoto Protocol -- the only global pact enforcing carbon cuts -- allowing five more years to finalize a wider pact.

Delegates agreed in the early hours of Sunday to start work next year on a new, legally binding accord to cut greenhouse gases, to be decided by 2015 and to come into force by 2020. The process for doing so, called the Durban Platform for Enhanced Action, would "develop a new protocol, another legal instrument or agreed outcome with legal force." The phrasing was vague enough for all parties to claim victory.

Countries also agreed on the format of a "Green Climate Fund" to help poor nations tackle climate change. "We have made history," said South African Foreign Minister Maite Nkoana-Mashabane, who chaired the talks.

German media commentators beg to differ. Most argue that the best that can be said of the Durban agreement is that it kept global climate talks alive. Some even question whether the UN is the right forum for climate talks, since the so-called accords have produced only meager results, while the world's climate continues to heat up inexorably.

"The losers are the small and vulnerable countries that are hit especially hard by climate change. True, they'll get money from the 'Green Climate Fund' once its financing has finally been agreed on. But in fact hardly anything is being done to stop emissions from continuing to rise dramatically."

"The fact that it's seen as a success that international climate diplomacy has dragged itself into a new round shows how inadequately the UN process on climate change is tackling the problem. Sure, the Europeans have managed to install a process in which countries will talk about what they can do to improve their efforts. But that doesn't amount to determined action against the impending climate disaster."

"The results of the Durban conference were meager. It has kept the sluggish process of negotiations alive -- but that's about it. And that's not good for the earth's climate. The agreements don't look bad on paper. A binding climate agreement covering all states, poor and rich, big and small, is to be negotiated by 2015. A date has even been given for the agreement to take effect: 2020. That is new and increases the binding nature of the process. But it's watered down in the small print. The agreement makes no mention of a legally binding agreement the Europeans would have liked to see. Now at best the talk is of an "agreed outcome with legal force." That threatens to tear down at the back what was agreed at the front."

"The United Nations has offered vague promises of agreements and reductions while the rise in greenhouse gas emissions is accelerating. Global warming is continuing unchecked: instead of two degrees Celsius over the pre-industrial age, four degrees is now likely. There was a lot of hand-wringing about that in Durban but once again a solution to the problem was adjourned."

"The Kyoto Protocol is saved. After a hard diplomatic battle, the summit meeting agreed to a continuation of the historic climate agreement to cut greenhouse gas emissions that would otherwise have expired in 2012. That makes for good reading. As does the fact that the US, China and the other emerging markets want to take part in a new global agreement from 2020. The only problem is that it's almost useless. The UN summit wasn't a debacle like the Copenhagen conference two years ago, but it only narrowly avoided complete failure -- like most of the 16 summits before it."

"Durban hasn't solved any problems, it has merely offered the prospect of a solution. In 2015, when the decision will have to be taken on a new agreement, China will have a new government, and the US will be facing its next presidential election the following year. The world climate council IPCC will have submitted its latest report and there is nothing to suggest that the scientists will sound the all clear. Quite the contrary. Global greenhouse gas emissions will continue to grow, unless there's an economic downturn. The pressure for a deal will continue to increase. And with a lot of luck, there will be a treaty in 2020 -- late, but not too late."

"What has been decided in Durban is no more than one of the typical compromise formulas one gets at the end of negotiations organized by the United Nations: everyone's a little bit satisfied. But Germany and the EU haven't succeeded in meeting the goals they had set themselves. German Environment Minister Norbert Röttgen had stressed in the run-up to the conference that the benchmark for success would be the extent to which a future agreement would be binding. The aim was to tie in major polluters that had not committed themselves to emissions reductions under the Kyoto Protocol. But the Durban summit hasn't answered the question as to whether big polluters like China, India and the US can be tied in to binding emissions reductions pledges from 2020. The international community plans to work out an agreement by 2015 to implement an outcome 'with legal force' in the following years. Anyone who believes that this formulation amounts to a future obligation by the US, China, India and other big polluters to cut emissions must be naïve."

"Durban has shown once again that global climate conferences aren't a suitable forum for effective climate protection. The UN climate conference didn't get closer to the goal of limiting global warming to two degrees over the pre-industrial age. The summit ended with a result -- but in truth, it failed." 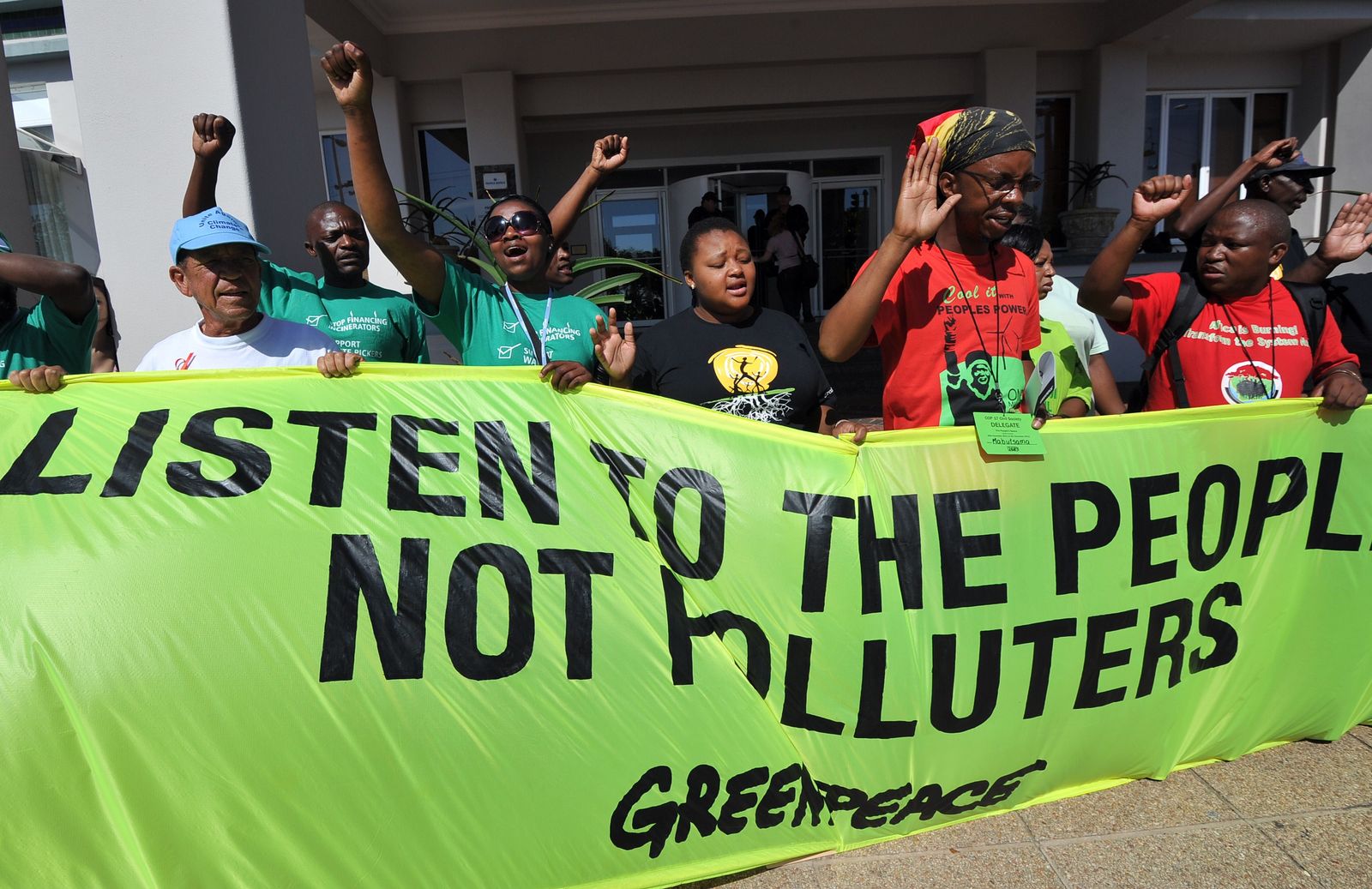 Greenpeace activists and supporters demonstrating during the Climate Summit in Durban, South Africa, which ended on Sunday.