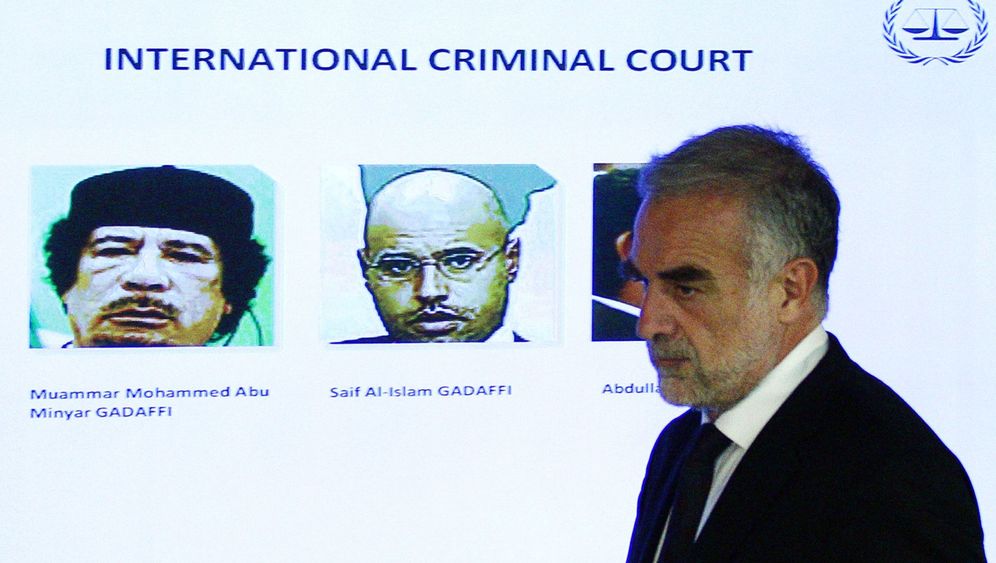 The international isolation of Libyan dictator Moammar Gadhafi took another step forward on Monday when the International Criminal Court (ICC) in The Hague issued a warrant for his arrest.

The Libyan leader is accused of crimes against humanity for killing civilians who rebelled against his rule. The ICC also issued warrants against Gadhafi's son and anointed successor, Seif al-Islam Gadhafi, and Abdullah al-Sanoussi, the head of Libyan intelligence.

The court accuses the three men of organizing the killing, injuring, arrest and imprisonment of hundreds of civilians during the first two weeks of the anti-Gadhafi uprising, from Feb. 15 onward. They are also accused of trying to cover up their alleged crimes.

In a statement, the court's presiding judge, Botswana's Sanji Monageng, said that "a state policy was designed at the highest level of the Libyan state machinery … aimed at deterring and quelling (civilian demonstrations) by any means." She also said that Gadhafi had "absolute, ultimate and unquestioned control" over Libya's military and security forces.

Dancing in the Streets of Benghazi

Thousand of Libyans danced in the streets of the eastern city of Benghazi, a rebel stronghold, upon hearing the news of the warrant. Predictably, Gadhafi's government rejected the warrant, with Libyan Justice Minister saying the ICC was "a tool of the Western world to prosecute leaders in the Third World."

For the moment at least, the warrant is likely to remain largely symbolic. The ICC does not possess police powers and is reliant on international support to enforce a warrant. Sudanese President Omar al-Bashir -- the only other sitting head of state to be indicted by the court -- is still at large despite two ICC arrest warrants issued against him.

Critics say that the warrant will mean that there is even less chance of Gadhafi accepting a negotiated solution to the conflict or voluntarily choosing to go into exile, like the deposed Tunisian leader Zine El Abidine Ben Ali who fled to Saudi Arabia in January, because of the danger of being arrested.

Gadhafi is under pressure from daily NATO airstrikes, but concerns are growing that the dictator cannot be ousted using military power alone. NATO commanders have warned that the alliance is slowing running out of munitions for its bombing campaign, and it is not clear how long operations can continue on the present level.

On Tuesday, German commentators debate the wisdom of the ICC's decision.

"Moammar Gadhafi will get over the fact that the Libyan national football team has defected. He will find it harder to deal with the arrest warrant issued by the International Criminal Court in The Hague … Following the Sudanese dictator Omar al-Bashir, Gadhafi is the second Arab leader to suffer this fate. Of course, the Sudanese leader is still more or less firmly ensconced in the capital Khartoum, while in Tripoli the noose is getting tighter around Gadhafi's neck. Al-Bashir also benefits from the fact that he has powerful friends -- for the time being -- while the Libyan leader is becoming increasingly isolated."

"Several weeks ago, when the Arab League agreed to the establishment of a no-fly zone over Libya, thereby effectively agreeing to the bombing campaign, they were already sending the indirect message that they wanted to get rid of Gadhafi. Even during the 'high points' of Gadhafi's bizarre political career, many considered him an eccentric political dervish. Hence there is more chance of him, rather than al-Bashir, ending up in The Hague."

"One does not need to mince words or beat around the bush: Moammar Gadhafi is a bloodthirsty torturer. He is a murderer who sometimes pitches his tent in Sodom, at other times in Gomorrah. Even worse, he transforms every place that he governs into Sodom and Gomorrah. Every day that he remains in power is one day too many."

"Nevertheless, the International Criminal Court's decision to issue an arrest warrant against him is foolish. … It will rule out any possibility of Gadhafi choosing to go into exile, because most states will be obliged to arrest him and deport him to the Netherlands. If the tyrant of Tripoli ever considered taking the same way out as his Tunisian counterpart Ben Ali, he will now think better of it and fight to the last bullet."

"The arrest warrants issued by the International Criminal Court against Gadhafi, Saif al-Islam and Abdullah al-Sanoussi send out a positive signal. They encourage all those who lead the difficult fight against the 'culture of impunity' that allows criminal rulers in many states to sleep in peace. … Although in some cases, such as with Sudanese President al-Bashir, The Hague's international arrest warrants cannot be enforced because they lie outside the prosecuting authorities' powers, they demonstrate the right of the victims of state terrorism to justice."

"It's true that where the interests of 'the West' are too strong or criminal leaders are too powerful, no prosecution takes place. Additionally, states such as the US and China reject the ICC and weaken its universal jurisdiction. But those are not arguments against the goal of pursuing criminal leaders where it is already possible -- thereby possibly acting as a deterrent to potential criminals."

In a guest editorial for the business daily Handelsblatt, the influential German journalist Josef Jotte writes:

"This is a hesitant war, which is able to damage Gaddafi, but which even after 100 days has not toppled him. … The West does not have much time left. It cannot intensify and escalate the conflict, because Europeans do not have the munitions and the Americans … are not exactly keen to get more deeply involved in the Libyan war."

"It could well be that tomorrow Gadhafi falls victim to a drone attack or a conspiracy among his own people. If not, then the following piece of advice will apply: Beware of wars that promise a quick, cheap victory. It does not exist, especially not for a Europe that, despite its enormous wealth, can not do without America."