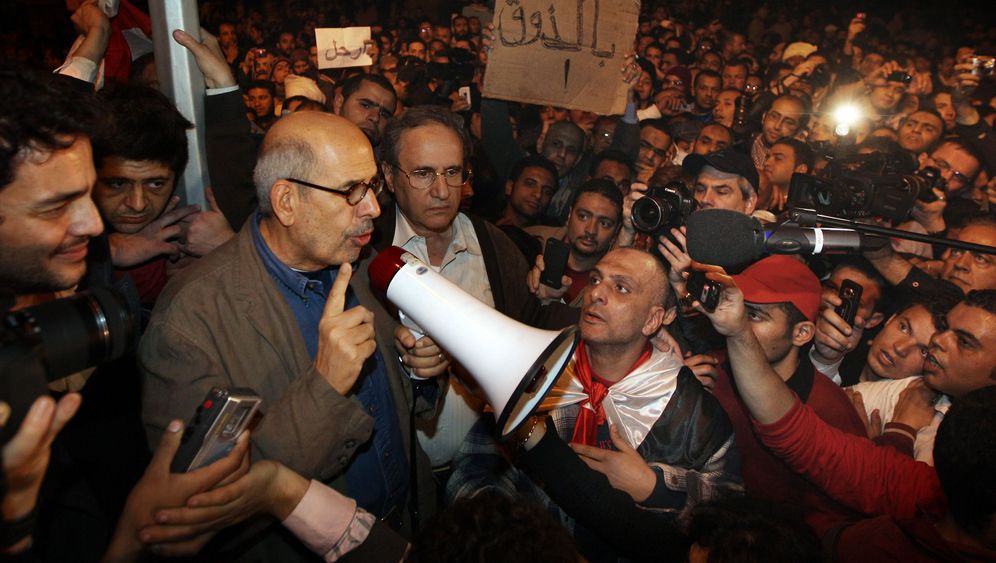 Six days of unrest, more than 100 people dead and an embattled president clings on to power. Egypt has reached something of a stalemate with protestors demanding that President Hosni Mubarak be swept from power, while the man who has ruled the country for 30 years refuses to go. And it could be the powerful army that ultimately decides Egypt's fate.

On Monday morning, thousands of protestors were still camped out in Cairo's Tahir Square, defying a curfew. The night before, this had been the site of a rally addressed by Mohamed ElBaradei, the Nobel Peace Laureate and former head of the UN's nuclear watchdog, who arrived back in Egypt on Thursday. "Change is coming. What we have begun, cannot go back," the 67-year-old told the crowd on Sunday. "We have one main demand -- the end of the regime and the beginning of a new stage, a new Egypt." Most of those gathered were unfazed by the low-flying jets that swept above the square.

The demonstrators have dismissed Mubarak's appointment of a new cabinet and prime minister. His promises of economic reform to address rising prices and unemployment appear to be too little too late. Protestors have called for a general strike on Monday and a "protest of the millions" on Tuesday, to press for their demands for democracy and an end to 30 years of Mubarak rule.

Fear of Anarchy and Chaos

The hope for change has been coupled with fear of anarchy and chaos. The population was largely left to protect itself over the weekend as the police force, which had been involved in clashes with protestors during the week, disappeared. Neighborhood vigilante groups formed over the weekend, setting up checkpoints and patrolling the streets to defend their homes as thugs roamed the streets. Gangs have looted supermarkets and stores as well as homes, and there were breakouts from at least four prisons in Cairo in recent days, adding to safety concerns.

However, there are now reports that a semblance of security has been restored with extra troops being sent into the cities to help calm panicked residents, and the police are once again out on the streets. The unrest is having an impact on the economy, however, with shops and businesses closing and tourists fleeing the country in droves. Tourism is vital to the Egyptian economy, accounting for up to 6 percent of GDP.

The United States has also poured billions of dollars into Egypt since Mubarak came to power, seeing him as a key ally in the region, first against the Soviets and then radical Islam. US military aid alone is $1.3 billion a year. Washington has now stopped short of calling for his ouster, with Secretary of State Hillary Clinton speaking of an "orderly transition."

The role of the army may be crucial in the coming days. "The army has to choose between Egypt and Mubarak," one banner on Tahrir Square proclaimed. And soldiers sat in tanks overseeing the protests without intervening. Admiral Mike Mullen, chairman of the US Joint Chiefs of Staff, praised the "professionalism" of the armed forces in refraining from cracking down on the protestors.

"In the next few days security and stability will return," Brigadier Atef Said told Reuters, speaking from Suez. "We will allow protests in the coming days. Everyone has the right to voice their opinion. We're listening and trying to help and satisfy all parties. We're not here to stop anyone. These are our people."

The German press on Monday looks at the ongoing unrest and some papers question whether Mubarak deliberately fuelled the chaos this weekend.

"Everything hinges on one decision: the resignation of President Hosni Mubarak. The country will only return to calm when the Egyptian leader, already deserted and ousted by his people, actually leaves. But the long-time ruler is clinging to power and even selling that as a sense of responsibility: 'I will not allow chaos.'"

"The contrary is the case: he has long since lost his power, and is seeking an escalation. His own police and thugs started the looting, doubtless acting on his orders. That is a mark of his unscrupulousness. If the Egyptians have to fear anarchy more than they love their uncompleted revolution, they might wish for the return of the president and his police state. That is Mubarak's ploy. The man who had such a tight grip on Egypt for three decades would love to present himself once more as the strong father of the nation protecting his citizens from the confusion and chaos. The man who restored law and order in the face of the rise of an unpredictable opposition."

"If the army ends up restoring calm by force, Mubarak and his followers could remain in power for a while."

"And if not? Then the aged president won't care any more. The pharaoh in the Führerbunker: If he has to go down, he'll take his country and his people down with him. In his downfall he can discredit the uprising that has cost him his power: he can stain the image of a revolt that started out peacefully: as an uprising by the youth and the middle class."

"Now that law and order have evaporated, the mob is dominating the picture of Egypt. The poorest of the poor are coming out of their slums. They are stealing what they could only gaze at in the glitzy shop windows for years, what they could never have afforded to buy."

"If the army (…) takes political power, the officers will have to ask themselves what is more important: to fly their old comrade out or take him where he should have been put long ago: in the dock."

"It is possible that the regime wants to show the urban population and the middle class what happens when the poor from the slums, criminals and the violent mob aren't kept down by force."

"Hosni Mubarak himself is in a precarious situation. The political demonstrations are calling for his resignation and the people want to shake off his corrupt regime. It is uncertain whether the army leadership stands fully behind him. The generals know that the 82-year-old, sick president is nearing the end of his term in any case. They will know their American ally won't want the brutal maintenance of a defunct system. An 'Iranian solution' in Cairo would disqualify Egypt as a partner in the West. So the army will watch whether the opposition produces a leader acceptable to both the people and the army."

"Chaos and anarchy are mounting because the army hasn't chosen a side yet. There are signs that the chaos wasn't just caused by gangs of criminals and plunderers from the slums, but also by parts of the security forces. That happened in Tunisia too. That is what the regime is banking on: the worse the situation becomes, the more people will wish for the return of the strong arm of the law."

"It is unclear how long this interim phase will last. The regime is waiting for the demonstrations to lose momentum and for the situation to calm down. But the more damage is done in the cities, the less the military will be able to remain passive."

"The long-term ally Hosni Mubarak now has his back against the wall. And Washington lacks what Mubarak's repressive policy has been fighting for years: a direct link to a democratic opposition -- to people who could emerge from the democracy movement as an alternative to the dictator."

"In this atmosphere, which is marked by fears of a deja-vu of the Iranian revolution of 1979 and concern about the future neighbourhood of Israel, there's a fierce dispute going on in Washington between the advocates of stability and those who are banking on democratic reform."

"The outcome of this internal conflict in Washington is open. But it's clear that the days of the Mubarak regime are numbered. And that the other authoritarian rulers and kings face turbulent days. The domino that fell in Tunisia has long since touched all the others."

"That cannot be in our interest. We need Egypt as an ally in this chronically warlike corner of the world."

"We can only hope that the people in Egypt will take the right decisions in the coming weeks. For themselves and for peace in the region."