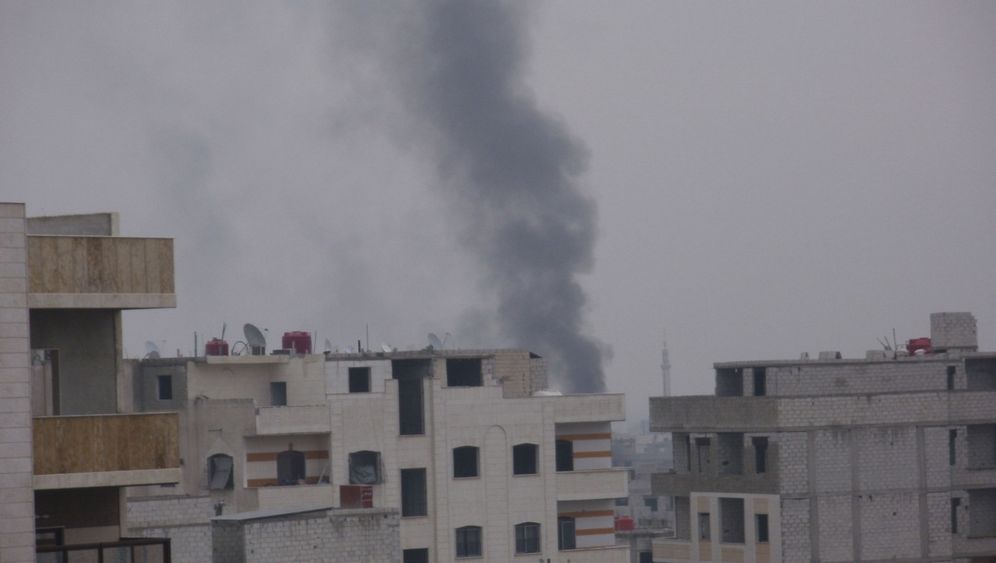 After a violent weekend in Syria, European diplomats have had enough. Both British Foreign Secretary William Hague and French Foreign Minister Alain Juppe confirmed on Monday that they are heading for New York on Tuesday to urge the United Nations to pass a resolution aimed at the violent Syrian crackdown against anti-regime demonstrations.

Juppe and Hague hope to be able to persuade China and Russia to support such a resolution, one that has the backing of the Arab League. Both countries vetoed a draft resolution last October that threatened Damascus with sanctions and Moscow remains wary of any resolution that could authorize foreign military intervention. Both countries hold a veto in the UN Security Council.

The diplomatic offensive comes following widespread fighting in Syria over the weekend, which saw tanks and troops deployed to enable the Syrian army to regain its grip on a number of Damascus suburbs. Fighting in the suburb of Saqba continued on Monday, news agencies reported.

Locals described the situation as "urban warfare" and said the violence was the most intense in capital since the beginning of the uprising, news agencies reported.

The Syrian Observatory for Human Rights said 80 people, half of them civilians, were killed across Syria on Sunday alone. Armed clashes on Monday killed six members of Syria's security forces and three civilians at Hirak, in southern Daraa province, the Observatory said. Syrian rebels described the regime's offensive as "unprecedented" and reported that clashes had moved as close as four kilometers from the capital on Sunday.

The Arab League responded to the surging violence by suspending its monitor mission on Saturday. Arab foreign ministers, who have urged Assad to step down and make way for a government of national unity, plan to discuss the crisis on February 5.

On Tuesday, Arab League Chief Nabil Elaraby will deliver an update to the UN Security Council, in a bid to secure support for the Arab plan for a UN resolution condemning President Bashar al-Assad's regime. Elaraby said he hoped to persuade Beijing and Moscow, who both initially shunned the Arab proposals.

In the wake of the latest violence, German media commentators remain skeptical of the Arab League's efforts to halt the violence in Syria.

"The Syrian situation could hardly be more hopeless: As soon as the observers' mandate in Syria was extended by one month, the Arab League decided to halt the operation."

"What the observers reported, dashed the hopes of those who had sent them. Their information suggested the worst: Rather than receding, violence was escalating and had reached the the outskirts of the capital Damascus. The observers were reduced to being an instrument or even a fig leaf of the Damascus regime."

"The Arab League, which has never stood out as a crisis manager in its 67-year history, is now unsure how to proceed. It has imposed limited economic and diplomatic sanctions against Syria, its observer's mission has failed and calls for President al-Assad's resignation have fallen on deaf ears. A military intervention is not being seriously considered."

"At least not on their own. The League has officially rejected intervention but now wants action from the United Nations -- although the UN's options are as limited as those of the Arab community. After all, did Moammar Gadhafi obey New York's calls for his resignation?"

"Libya's revolt against Gadhafi began almost exactly one year ago and NATO intervened after just a few weeks. Syria's revolt against Assad also started almost one year ago but rebels are fighting their battle alone. In the case of Libya, NATO justified their intervention on the grounds that Gadhafi was organising a massacre of rebels cornered in Benghazi. In the case of Syria, numerous reports indicate Assad has taken similarly brutal steps but NATO still sees no reason to intervene."

"The rebels seem to be succeeding in overthrowing Assad without Western help. They are reportedly fighting in Damascus. If Assad falls, the Muslim Brotherhood will assume a major role in Syria. German Foreign Minister Guido Westerwelle and Development Minister Dirk Niebel will travel to Jordan and Israel this week -- and not without good reason. Jordan is Israel's last moderate neighbor. In the Palestinian Territories, the situation is more tense. Chancellor Angela Merkel has stressed that Israel's security is essential to Germany. It is time to develop a concept of how the 'Arab Spring' fits in to the German policy."

"The Security Council does not seek air strikes but rather an orderly transfer of power. But the Arab plan of transfering power from the elite to the opposition only had limited success in Sanaa. Why should it work in Damascus? After nearly 11 months of martyrdom, it is hard to simply send the insurgents home. Every day the riots become more violent and more fragmented. Now, even cautious Kurds are making demands. Syria's Arab neighbors have capitulated and the international community now gets another chance. But the conflict is further from a solution than ever."

"It seems that even the Arab League doesn't know what road it is heading down. A year ago, the organisation resembled a wax museum rather than an active regional organisation. But now it is powering ahead to such an extent that all the member countries are trying to claim it as their own. No one watching this dizzying ascent will be surprised that the League's Syrian observers were not well prepared. How should they defy Assad's criminal energy?"

"Even UN observers, with their gleaming reputations, disappointed everyone who wanted to believe that intervention could be sidestepped by sending in a few officials in orange vests."