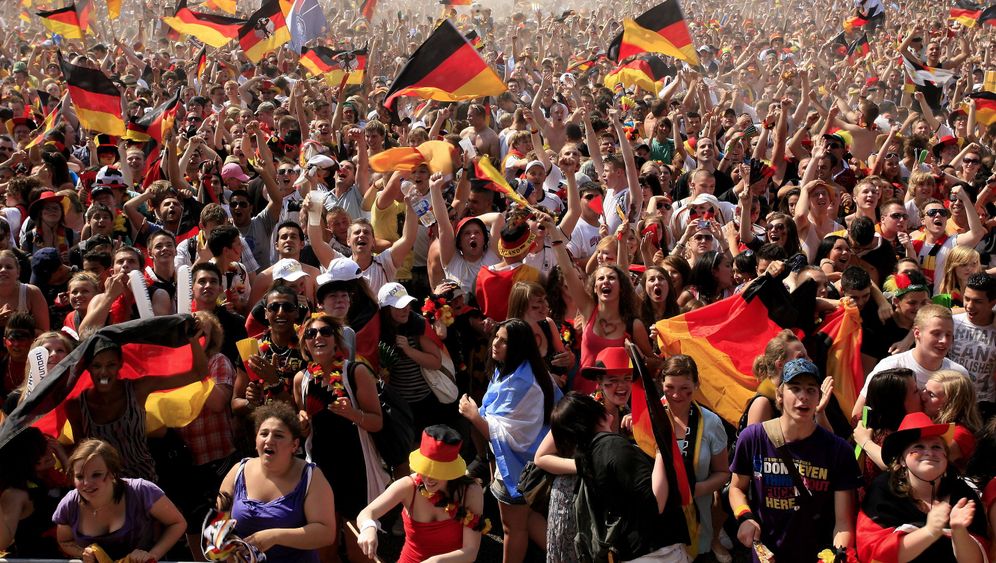 This Saturday Germany played Argentina during the quarter-finals of the World Cup and won with an unexpectedly large margin of 4:0. The team now go on to face Spain in the semi-finals on Wednesday.

Millions of Germans celebrated, including the hundreds of thousands crowded into the so-called "Fan Mile" in central Berlin, an area specially set aside for audiences to watch the games together on giant screens.

On Monday the German media leave no editorial subject uncovered, writing about everything from Chancellor Angela Merkel's trip to South Africa to see the game, which had been criticized as unnecessary and too expensive, to analysis as to how the team achieved such a miraculous score line, to Germany's burgeoning patriotic spirit.

"Chancellor Merkel flew to South Africa specially to inspire the national team. 'A lucky charm,' the spokesperson for the German Football Association (DFB) called her. Even minutes before the game, though her presence was seen as a bad omen."

"If the chancellor's recent 'luck' was anything to go by, then the team should have lost simply because of her being there. But now all the doomsayers are silent and even the critics from the taxpayer's association, who criticized Merkel's trip as too expensive, have logged off. Who would be interested in taxes or the euro crisis or the conflict in Afghanistan when there is football to think about? Nobody."

"And let's not even think about what would have happened if Löw's team had lost against the Argentineans. The weather would have worsened in a flash and the talk would only have been of health insurance, oil leaks and problems with the ruling coalition. Let's face facts: Basically the nation would have been almost completely finished. However with the national team's victory over Argentina, all of sudden everything is possible again."

"It is only football. The effect of the national team on the interior society of the country they represent is often over estimated. After all, if you are black you won't be any more relaxed walking through 'no-go' areas in eastern Germany just because Jerome Boateng is on the German national team. However, the effect on the outside world is not to be under estimated. And there are plenty of examples."

"In 1966 the German team lost the final to England, 4:2. It was a tight, hard fought game and the third goal by England was a controversial one. Today we know what the players knew then: The third goal was no goal at all. The Germans had plenty of reasons to get upset, they could have become angry and their rage could have translated into fouls. But they accepted what could not be changed, took the silver medal and congratulated the English team on their win."

"After the game the German team drove to the official banquet in the team bus and on every street corner there were English fans applauding them for being such good losers. It was 20 years after World War II, it was only a football game but it improved the image of Germans in English eyes."

"The way this team plays is to be admired. They have long since conquered the hearts of their compatriots back home and now they are winning hearts beyond Germany's borders. Because various players were missing and because they had a relatively young and inexperienced side, not much was expected of the Germans. But those modest expectations seem to have been a great advantage. So -- particularly before the semi-final -- we should not stray from this path and build up unnecessary pressure on the team. Of course, the World Cup is almost within our grasp and the team could win. But we would do better to leave the team in peace."

"This German team is giving the whole nation a special feeling of strength because they are a multi-cultural team that really plays altogether, something they were not thought capable of previously. The fact that after this World Cup appearance, German football will be talked about around the world using words like creativity, wit, enthusiasm and team spirit is good for all of us."

"The future was out there on the field to admire. The past was seen sitting in the stands. Firstly, there was Chancellor Angela Merkel, who enjoyed the game as though she were a manic depressive emerging from a bout of angst. Then we saw the German team's injured captain Michael Ballack, who cannot play in this contest because of injury. Both embody old principles. Ballack is the leader of the pack, who tends to command by decree and who prefers a hierarchy: A soldier of football, not someone who inspires with their cool. And Merkel  she knows there is no way that her administration is representative of this productive, forward looking atmosphere."

"On the Cape Town pitch one saw a model future defined (albeit only in terms of football): Young players taking responsibility themselves because the leadership is indisposed, who literally do everything they can to support one another. The star of the show is the team itself, not a command structure based around the skills of individualists."

"Michael Ballack is no longer needed. With the occasional exception, the boys can do it better without him. And Merkel should enjoy her excursion to South Africa. It is a farewell trip. She -- and the style of politics she represents -- are relics."

"We, the Germans, the soldiers of football known for a hierarchical way of thinking, are suddenly a creative bunch of rascals! Obviously we are very, very pleased about this."

"And we feel motivated to bring that youth and spirit into the fight against global problems. Yes, eventually we will start to rescue the world. Climate change, oil leaks, bankrupt states -- these must be beaten too. That is if our Jogi (Löw) joins in -- he is, after all, our mastermind."

"But back to basics: It's fantastic that we are going to play Spain next. We don't need any easy tasks. We want to prove ourselves. And if not us, then who? After this it will be onto the final with Holland. And just between us, if the other teams don't start to try a little harder, it's going to get boring." 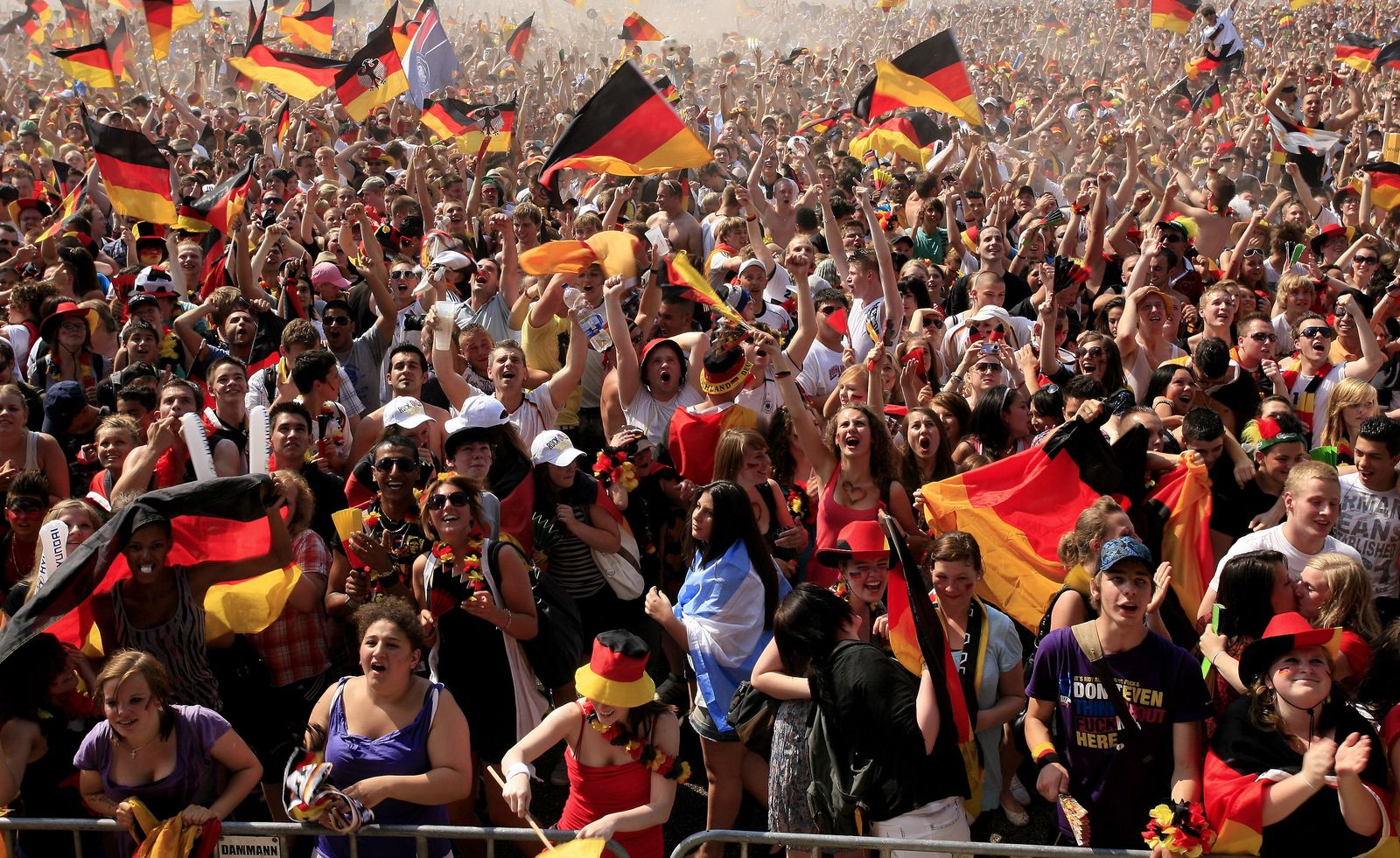 Hundreds of thousands of Germany fans braved a heatwave to cheer the Mannschaft Saturday in their quarter-final match against Argentina. Here, a public viewing in Hamburg.