As violence in Libya continues with no end in sight, the debate about a possible military intervention by the West has heated up. But the international community is cautious about getting dragged into the conflict, which threatens to turn into a prolonged civil war. US Secretary of State Hillary Clinton has said the US is concerned about Libya "descending into chaos and becoming a giant Somalia."

On Thursday, there were reports that rebels fighting dictator Moammar Gadhadfi had called on the international community to impose a no-fly zone over the country. That followed a rebel demand on Wednesday for UN-backed air strikes against foreign mercenaries who are supposedly fighting for Gadhafi.

NATO Secretary-General Anders Fogh Rasmussen said on Thursday that the alliance is engaged in "prudent planning for all eventualities," despite having no intention of interfering in Libya. Western diplomats told the Associated Press that some NATO members were drawing up contingency plans for a no-fly zone, should the international community decide on such a step.

Getting a no-fly zone approved by the UN Security Council would be tough, given that Russia -- a veto-holding permanent member -- has already opposed such a move. On Wednesday, too, US Defense Secretary Robert Gates also called for an end to "loose talk" about military intervention, saying that a no-fly zone would also entail a military attack on Libya.

The West has already taken a number of non-military measures. The UN Security Council has imposed sanctions on the Gadhafi regime, as have a number of European countries, including Germany. Libya has also been suspended from the UN Human Rights Council, which met in Geneva earlier this week.

On Thursday, the International Criminal Court announced it was launching an investigation into Gadhafi and his close associates, including some of his sons, over possible crimes against humanity. The ICC's prosecutor, Luis Moreno-Ocampo, said there would be "no impunity in Libya."

Meanwhile Gadhafi shows no sign of wanting to relinquish control. His forces struck back at rebels in the east of the country again on Thursday, following attacks on Wednesday. Further air strikes on the rebel-held towns of Brega, an important oil-exporting port, and Adjabiya were reported Thursday. On Wednesday, rebels had succeeded in beating back a government offensive.

German commentators take a look at the West's response on Thursday.

"Those who hoped that the political upheaval in Libya would follow a similar straightforward pattern as in Tunisia and Egypt now face being proved wrong. Gadhafi has regained his composure militarily and is using his remaining power to start a campaign of revenge against the revolutionaries. … It is not Tunisia that is currently the model for Libya's future. Instead, it threatens to become a Somalia on the Mediterranean."

"In Libya, the most important thing now is to oust Gadhafi from power. While the international community agonizes over aid for refugees and new ways to increase the pressure on Gadhafi, people are dying every day, and the fear and despair of Libyans is increasing. The faster a decision is taken against Gadhafi, the better. Anyone wanting to help Libya must find a way to eliminate Gadhafi."

"It is easy to ridicule the achievements of the United Nations. The Security Council quickly imposed sanctions against Gadhafi's regime. But do the diplomats intend to stop the dictator with fine print? Will the colonel surrender in the final battle for Tripoli because the world has imposed a travel ban on him, blocked his foreign bank accounts and threatened to prosecute him in the International Criminal Court?"

"But the UN is an organization that represents the world as it is, not the world as it should be. In the struggle to find compromises, democrats have to deal with autocrats, raw material producers with consumers, and freedom-lovers with sponsors of terror."

"Nevertheless, the international organization acted wisely last week. After a week of UN diplomacy, Gadhafi has now received a clear message that no one in the world sees him as a brave anti-imperialist, resisting the West and offering hope to the oppressed of the Global South. Gadhafi … is isolated. In Geneva, not even Cuba voted against the resolution to suspend Libya from the UN Human Rights Council."

"Colonel Gadhafi strikes back. With an attack on the oil and port city of Brega, the Libyan dictator has shown that he means his vicious threats against the insurgents."

"The insurgents are poorly organized. They have yet to deploy troops, even though they have seized large quantities of weapons and many army officers have switched sides. Either the rebels are in disagreement or they are incapable of organization. The present situation does not, however, require endless debates in citizens' committees. Rather, it needs readiness for military action. … Time is on Gadhafi's side." 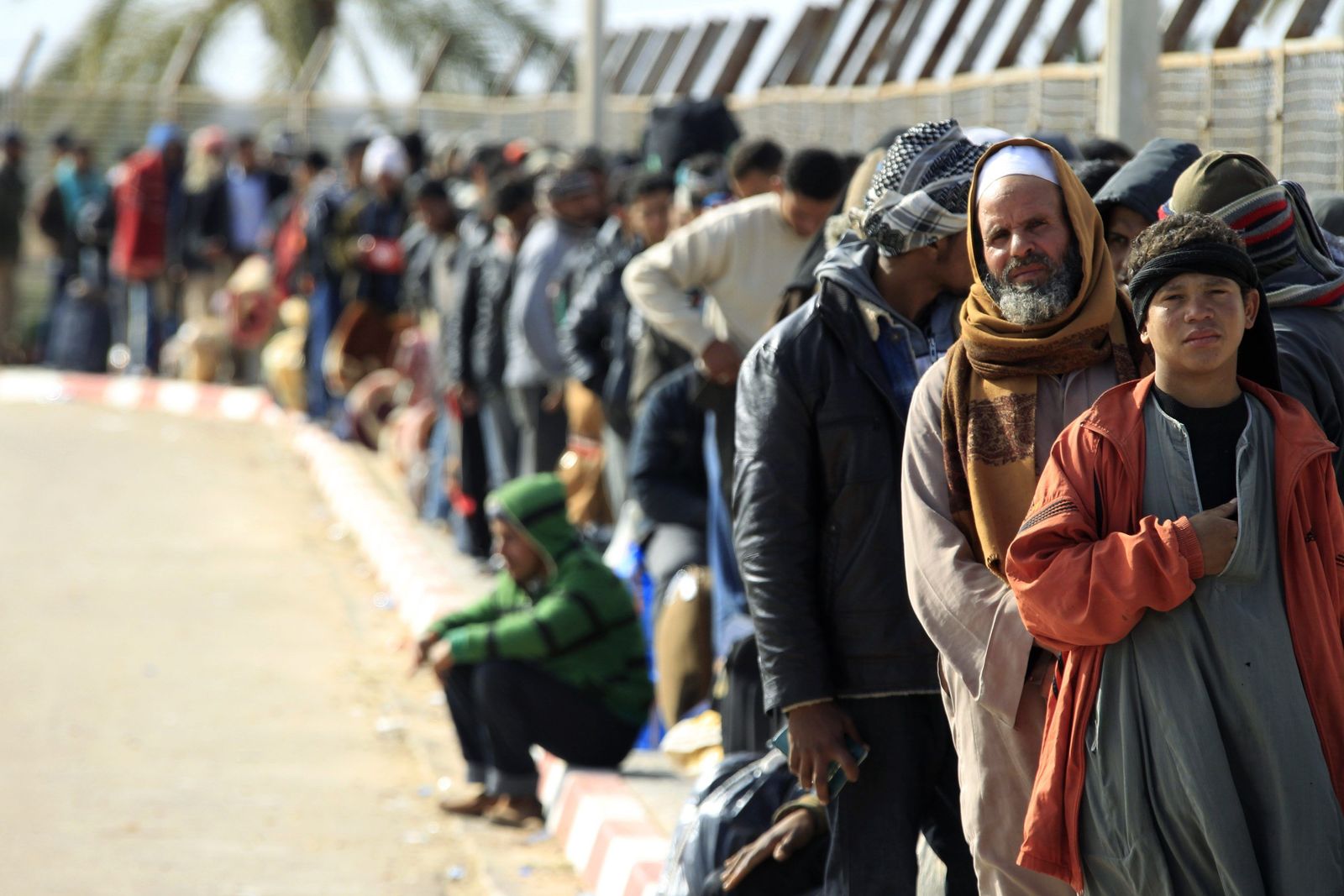 Egyptians who fled the violence in Libya wait for a flight home in Tunisia.