On Sunday, Turkish voters delivered a third term for Recep Tayyip Erdogan and gave his Justice and Development Party (AKP) a resounding victory, but one just short of what would have been required for the prime minister to unilaterally change his country's constitution.

Erdogan had wanted to convert Turkey's parliamentary system into a presidential one based on the French model, with himself assuming the role of president. Voter turnout on Sunday was high -- about 84 percent of eligible voters went to the polls. The Kurdish minority succeeded in winning 36 seats in the 550-seat parliament, which is more than they had ever won before, and which allows them a potential role in any development of a new constitution.

Erdogan's conservative AKP won 326 seats. A super majority of 367 would have been needed to change the constitution without referendum. On Tuesday, the Turkish newspaper Sabah reported that Erdogan would be sending representatives to meet with the other Turkish parties this summer to hear their thoughts on constitutional reform. Turkish media reports indicate that the leader of the chief opposition party, the CHP, is willing to seek a compromise with Erdogan.

In Germany, some leaders of Chancellor Angela Merkel's party, the Christian Democratic Union (CDU), challenged Erdogan to focus more on Europe in the future following the Sunday election. "Turkey has European common values, and we expect that will continue," Andreas Schockenhoff, a parliamentary leader of the CDU, told the daily newspaper Rheinische Post.

Meanwhile, thousands of refugees from Turkey's neighbor, Syria, continue to flee across the border, where they are being housed in camps enclosed with barbed wire. Turkish authorities have blocked media access to the camps, and Erdogan has said that he plans to speak with Syrian President Bashar Assad, whose government is waging a violent crackdown on protestors, soon.

The Turkish election dominates the editorial pages on Tuesday in Germany, where the population includes about 4 million people of Turkish origin. German commentators largely considered it a positive development that Erdogan's party did not win a super majority, and pointed out the many challenges the country faces, from finding compromise with the Kurdish minority, to maintaining strong economic growth.

"The biggest obstacle that Erdogan's state faces on its way to becoming a first league power is a domestic one. Erdogan said over and over again during his campaign that Turkey no longer has a Kurdish problem. The question is whether or not that was just campaign rhetoric, or the prime minister either, in a manner of many mighty paladins and claqueurs, is battling against the adversity of reality, and really no longer recognizes his own country. Because the 'Kurdish problem' not only has not been solved in Turkey, but it remains a domestic time bomb. And if it is not defused, Ankara's foreign policy aspirations as a ruling power will remain tarnished."

"Currently, the Kurdish parties in Turkey are calling for a new constitution without an ethnic definition for citizenship; Kurdish language instruction from kindergarten to university; and 'regional autonomy' in the Kurdish dominated regions in southeastern Turkey. A fulfillment of these wishes is a long way off, and even if they were satisfied at some point, that does not mean there will be an end to the Kurdish conflict. The nationalist Kurdish parties will then issue new, far-reaching demands, because that is what their parties are based on. They have to in order for their supporters not to abandon them. A lasting domestic peace can therefore only exist when the Kurdistan Workers' Party (PKK) finally lays down its weapons."

"Without an agreement between the state and the PKK, along with general amnesty for its fighters, that would not be possible. And even then success would be uncertain, because such scenarios treat the PKK as if it were a monolistic block, which it is not. A state that is facing such difficulties can only employ a foreign policy at half its possible strength."

"The Turks are pragmatic to the core. They gave Erdogan this victory, not because he is a pious Muslim, but simply because he gave them a better country, with more than 8-percent growth. Of all the G-20 countries, only China has grown at a faster pace. Erdogan has turned Turkey into a confident actor in the region, and the people like that. Perhaps he deserves the most credit for breaking the political power of the military, and along the way giving new freedoms to Christians and Kurds in his country. The politician who likes to play the populist has possibly changed his country more than any other leader since the nation's founder Atatürk. But that is not enough."

"Turkey is on its way to modernity, on its way to becoming a full democracy that recognizes the diversity of its society and the rights of individuals. It has come a long way, but the toughest challenges remain. The decaying judiciary, the cover of censorship, the still enormous disadvantages for women -- a lot of the issues that Europeans decry as human rights violations have their roots in the undemocratic constitution in the country that was inherited from the 1980 putsch. Turkey desperately needs a new constitution. It needs real reconciliation with the Kurds. And it needs new passion for the dormant process of joining the European Union."

"Tayyip Erdogan, the most powerful prime minister that Turkey has ever had, did not succeed in the election on Sunday in winning a majority large enough to change the constitution. He did win for the third time in a row, and won the vote of every second person, but his march on the way to becoming a dictator has been stopped..."

"His original goal of joining the EU has broken down because of the short-sighted policies of Nicolas Sarkozy and Angela Merkel. But domestic politics has become too parochial for Erdogan. Since Europe doesn't want him, he is trying for a bigger role in the Middle East, making Turkey the leading power between Sarajevo and Cairo."

"There is one mission that could turn him into a type of new founder for the modern Turkish state, and that is finding a solution for the conflict with the Kurdish minority. Nothing has damaged Turkey, and its population, more than the bloody war between the army and Kurdish nationalists. Erdogan would have the power to end this war with a real compromise. And through that he could achieve a real place in history."

"Turkey sent a clear signal to its proud prime minister: through moderate reform you turned our country into a regional power, that can serve as a model for Muslim neighbors. But the first civilian constitution since the militarily shaped laws of the 1980s should not only have the handwriting of the pasha, who gathers more power for himself instead of decentralizing it."

"It is in Turkey's, and the region's, best interests that Erdogan gets the message. Already during the Arab Spring, he squandered much of the political capital that his country, as a living democracy in the Arab world, had to offer. When only the worst despots still backed Libya's Gadhafi, Erdogan clung to the Libyan government's ability to reform itself. He advised his Syrian friend Assad to change, while Assad eagerly bludgeoned his opponents. Now Erdogan must be moderate and control his own authoritarian inclinations."

"Erdogan is now behaving modestly. On the issue of reforming the constitution, he is consulting with representatives from different political groups and all corners of society. That is the right path. But Erdogan must be careful that, by focusing on the debate over the constitution, he doesn't lose sight of everything else. Because Turkey is facing great challenges. Above all is the country's economic policy, which was Erdogan's trump card during the campaign."

"The per-capita income has almost tripled in Turkey since he took office. But now the economic situation is showing all the signs of a dangerous overheating. The current account deficit is likely reach 8 percent of the GDP this year."

"That he wouldn't want to bother the partying mood before the election with restrictive financial policies is understandable. But now the prime minister must get back to business. The campaign talk, that, at best, there would be zero percent interest rates, is unworldly. The central bank must raise interest rates and the government must control spending, so that the boom on the Bosphorus doesn't end in a crash. That would be dangerous, both for Turkey, and for its partners." 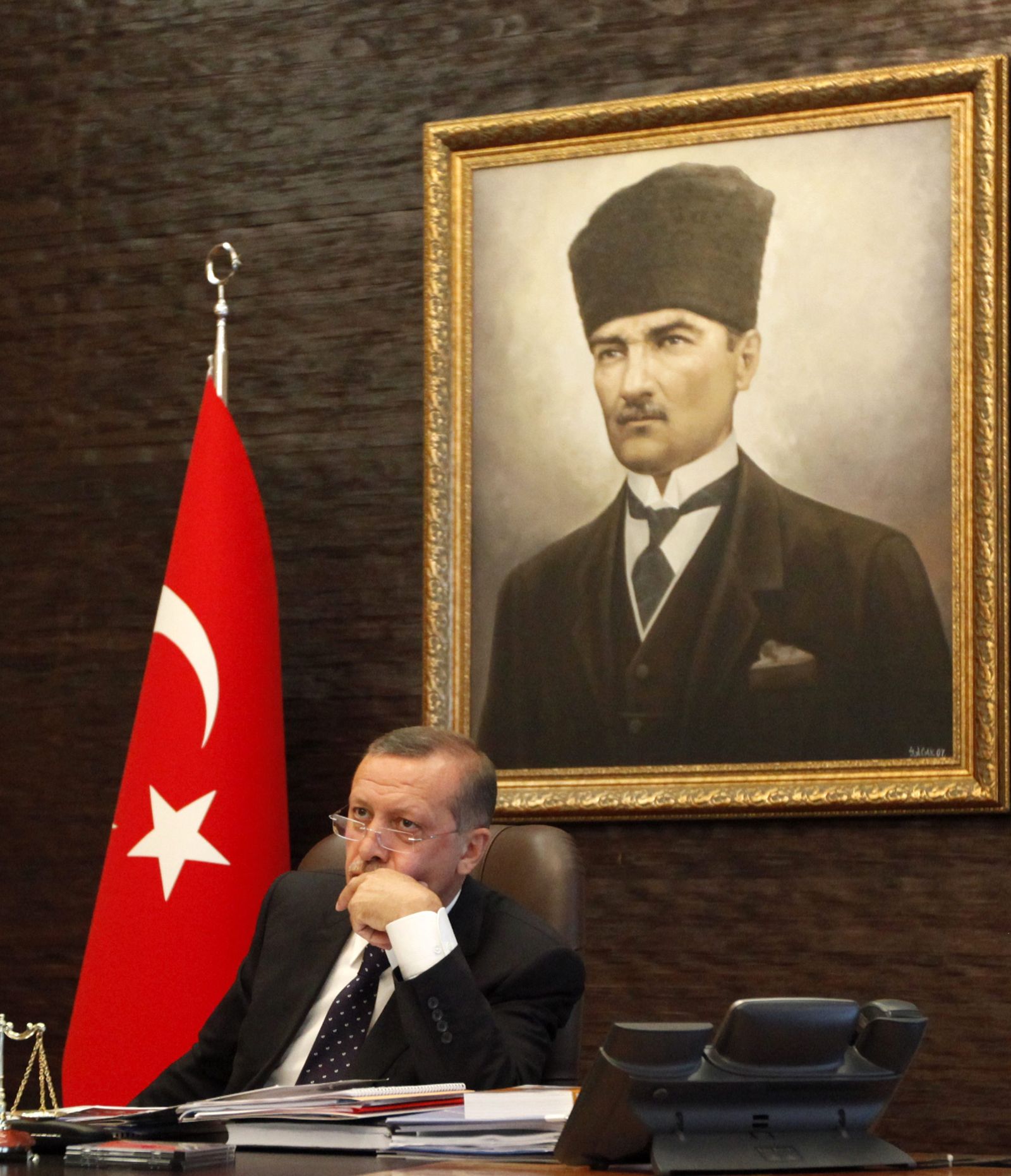 Turkey's Prime Minister Tayyip Erdogan at his office at the AK Party headquarters in Ankara.