While media attention has largely remained focused on the Western military intervention in Libya, the international community has also gotten involved in a second conflict on the African continent -- apparently with greater success.

Former President Laurent Gbagbo, who has been clinging to power in Ivory Coast despite losing November's election, appears to be on his last legs following a United Nations intervention against him earlier this week. On Wednesday, he remained holed up in a subterranean bunker in the country's main city, Abidjan, as he came under attack by forces loyal to Alassane Ouattara, the democratically elected president. Ouattara supporters said on French television that Gbagbo would be captured "soon."

On Tuesday, Gbagbo had seemed to be on the verge of surrender, but that later turned out to be an apparent attempt to play for time. French radio station RFI broadcast an interview with Gbagbo on Wednesday where he insisted he had won the election and that he would not leave. Other reports suggest that Gbagbo has been negotiating with the UN over the terms of his possible departure.

Ouattara's forces were significantly aided by a military intervention by the United Nations and France, the former colonial power, on Monday, when UN helicopters and French troops attacked Gbagbo's heavy arms. A UN Security Council resolution passed on March 30 gave authorization to destroy the ruler's weapons, because they had been used against the civilian population. UN Secretary-General Ban Ki-moon insisted that the UN had not taken sides in the conflict by doing so, but had merely fulfilled its mandate to protect the civilian population. The UN and France were not, however, involved in Wednesday's attack on Gbagbo's compound, a French military spokesman told the Associated Press.

Gbagbo has insisted he won the November 2010 run-off election for president, despite a ruling by the country's election commission in favor of Ouattara, who is regarded as the legitimate president by the UN, the US, the European Union and the African Union. Observers say that the UN is keen that Gbagbo -- who still enjoys considerable support, having won 46 percent of the vote in November -- be allowed to yield power without being physically harmed, to avoid destabilizing the country any further.

On Tuesday, German Foreign Minister Guido Westerwelle called on Gbagbo to accept the will of his people and give up power, so that his country could have a peaceful future.

The election in November was supposed to reunite the country, which had been divided since 2002 following a rebellion in the northern half of the country. After the disputed vote, both candidates had themselves inaugurated as president. In the ensuing standoff, the two sides engaged in fighting across the country. The conflict reached a climax when pro-Outtara forces entered the capital Yamoussoukro and the main city Abidjan at the end of March.

Gbagbo's forces are accused of killing opponents with heavy arms such as mortars and machine guns in the four-month period of unrest since the disputed election. Outtara supporters in Abidjan are also accused of killing Gbagbo loyalists, however. According to the UN, around 500 people have died in the unrest, while 1 million have been forced to flee their homes.

On Wednesday, German commentators consider the morality of the Western military intervention.

"The power struggle in Ivory Coast seems to have been decided in favor of Ouattara, who the international community recognizes as president. Obviously, the military intervention of UN peacekeepers and French soldiers helped bring that about."

"The UN and France, which has now engaged in its second African military conflict within a short space of time, do not need to be overly concerned about any accusations from Gbagbo that they have violated Ivorian sovereignty. The UN forces were authorized to use all necessary means to protect the civilian population. Under these circumstances, 'neutrality' -- in other words, looking on as civilians are massacred -- would have been tantamount to a violation of the UN's own mandate. This military intervention was correct and justified."

"Libya and Ivory Coast are both on the African continent. But this part of the world is so large and rich in contrasts, that the two countries where bombs are currently falling have little in common, apart from the strange psyches of two leaders who in their blindness refuse to come to their senses and fail to recognize that it is time for them to leave the political stage."

"The pretext of providing protection for civilians elsewhere in the world is often used (by governments) to mobilize broad support among the electorate in their own country. What could be nobler than committing oneself to rescuing people in need? This reflects a long-standing desire to have a higher sense of morality within politics. But that desire is limited in its influence, otherwise we would be constantly witnessing military interventions, not only in Libya, but also south of the Sahara. Defenseless people are suffering and being harassed and murdered by militias all over the world, especially in poorer regions."

"The conflicts in Ivory Coast and Libya reveal the great moral dilemma that states find themselves in when they try to legitimize military intervention by referring mainly to humanitarian principles. As long as it is impossible to enforce these ideas everywhere, countries should not act as if such principles are the foundation of a new global foreign policy, otherwise they will quickly lose credibility."

"Not unexpectedly, criticism (of the UN resolution for Ivory Coast) immediately came from Moscow, which claimed that the UN had violated its mandate committing it to neutrality and impartiality. But the reprimand from Russia not only contradicts the basic idea of the United Nations but also the mandate for the UN mission in Ivory Coast: The blue helmets are there to prevent conflict and protect civilians and human rights. Even the support by the French is covered by the resolution."

"The criticism is also absurd for another reason: How can the UN stay out of a conflict between an elected and internationally recognized president and a non-legitimate, deranged tyrant? How could the UN's concerns about its reputation as a neutral mediator weigh heavier than its damaged reputation as a protector of civilian populations? UN Secretary-General Ban Ki-moon was probably not only inspired to take his decision by the courageous action of the international community in Libya, but also by the painful memory of the UN's passivity vis-à-vis the mass killings in Srebrenica and Rwanda."

"It's undeniable that the UN intervention has its good side. It sends a signal to other despots on the continent that they cannot expect to cling to power illegitimately without being punished. The international community must also show opposition parties in African countries that it pays off to have a peaceful transition of power."

"Nevertheless, the 1,500 UN soldiers in Ivory Coast had already had a mandate to protect civilians for a long time. The UN should have decided earlier to 'aggressively' use that mandate. If more blue helmets had opposed Gbagbo with determination, it would probably have hindered his attacks on his opponents and civilians -- not to mention the equally destructive counteroffensive by the Ouattara militias."

"The UN supported Ouattara's advance despite all its avowals of neutrality. It now has to do everything to make sure that the new president works toward reconciliation in the country and investigates the crimes of his own supporters."

"With his refusal to cede power to the election winner, Gbagbo did untold damage to his country. Now the solution has come in the form of violence and with inappropriate measures: UN troops, whose mandate foresaw them protecting civilians and maintaining political neutrality, have paved the way for the election winner Ouattara to take power through the use of force. The UN secretary-general is clearly not afraid of making an overgenerous interpretation of the UN mandate. And France, the former colonial power which still feels the pain of the loss of Ivory Coast, could not resist taking part in the neocolonial power play. Ouattara's troops could have secured victory over Gbagbo's forces even without outside help. There are now reports that war crimes may have been committed."

"Many African countries are also partly to blame for the fact that things have come so far. Instead of taking a determined stance and clearly showing Gbagbo the door, they talked in a way that gave the election loser hope. The post-election conflict in Ivory Coast should be a source of shame for all Africans who genuinely want African solutions to African problems." 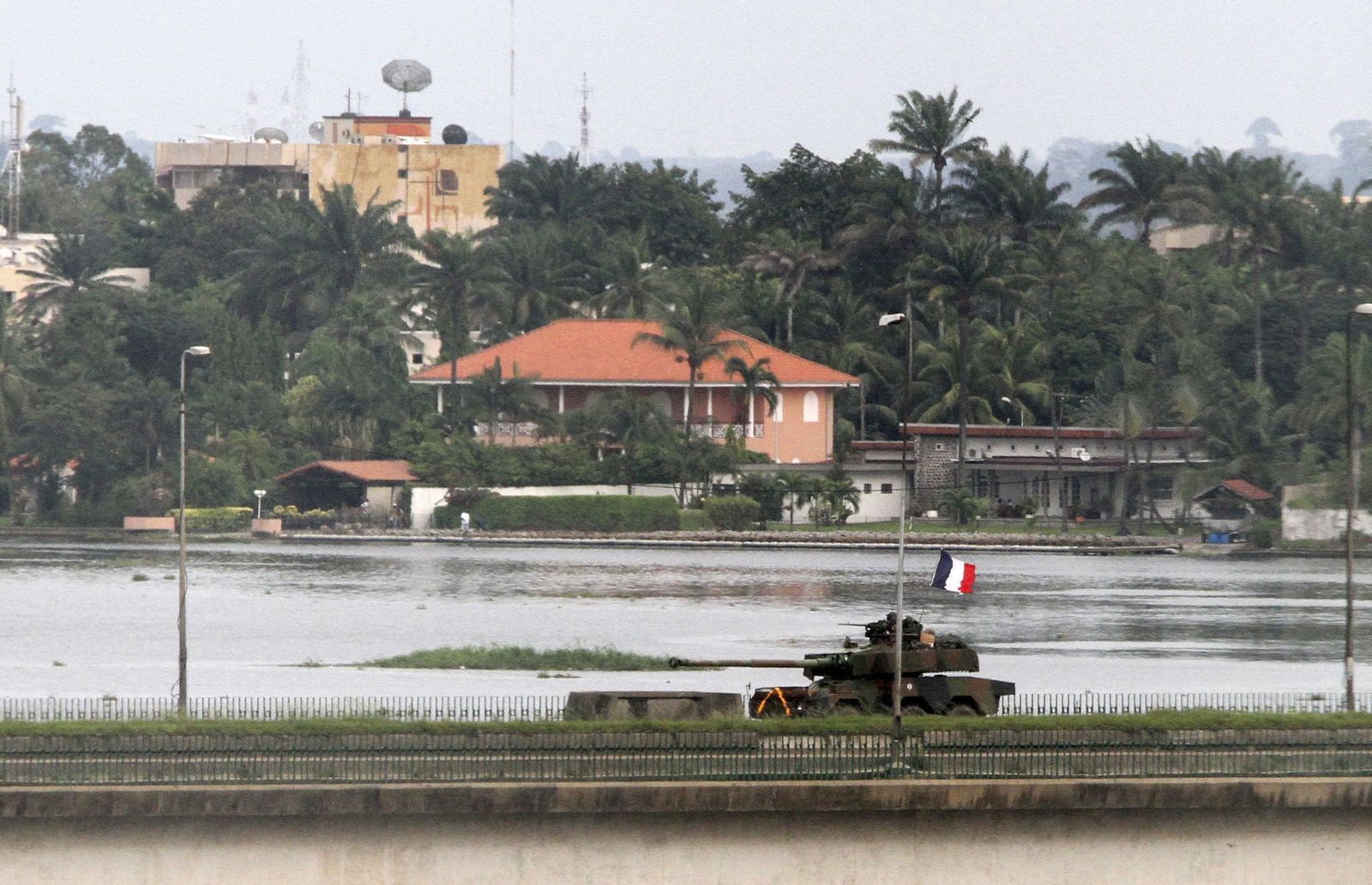