It's been a good week for Julian Assange. The fugitive Australian founder of WikiLeaks was detained in Britain on December 7 for extradition to Sweden to face questions on sex-crime allegations, which amount not quite to rape but the more mysterious Swedish charge of "sex by surprise." A number of celebrities donated money for his bail, and on Thursday he was free, stepping out of the High Court building in London to speak under a light snowfall to a flashbulb-popping press gaggle. By Friday the Australian Federal Police had announced that he couldn't be charged for any crime in his home nation for the leaks that have made him so notorious.

"The advice (from federal police) is that there have been no breaches of Australian law," Prime Minister Julia Gillard told reporters on Friday, though she labelled this year's dump of some 250,000 classified American documents by WikiLeaks "grossly irresponsible."

Assange evidently worries that if he travels home to Australia -- or to Sweden, to face the sex charges -- he might be arrested under pressure from Washington on some other charge. The US, though, has not yet accused him of any crime. Attorney General Eric Holder has simply promised to close "loopholes" in American law to make sure WikiLeaks' behavior can be prosecuted.

The problem for US authorities is that Assange and WikiLeaks haven't leaked documents: They appear to have merely received leaked documents, just as the New York Times, SPIEGEL and the Guardian did when WikiLeaks made them available to journalists. So laws ensuring press freedom may protect the Australian, too.

His actual role in world politics -- villain, grandstander, or hero-nerd -- has been debated for months, and on Friday, after his release into a sort of house arrest in London, German commentators try to weigh Assange's crime and tot up his moral score.

"The WikiLeaks founder, free on bail, now stands under special protection: that of the public. It won't shield him from criminal proceedings, but it might protect him from official arbitrariness. And so far the American superpower has seemed arbitrary -- or rather helpless -- in the fight to suppress unwanted leaks of classified documents."

"Information that exists in the (digital) world doesn't disappear. Beyond awkward, repressive measures against the owners and managers of Internet platforms … two counter-strategies are apparent: A government can dump as much as possible on the Internet -- truths, half-truths and lies -- or it can simply avoid sending truly important, unencrypted information through (digital) channels, as far as this might be possible. So far, though, it's not WikiLeaks that has been on the defensive."

"Figures like Assange benefit from a widespread fantasy of power -- the egocentric dream of a single person steering the world from a hotel room or a living room, without bothering to engage with a staff, a neighborhood, or any broader citizenship … The myth of a free-floating genius is at large in the world again."

"Max Weber observed a century ago that the rise in administrative costs and complexity in government and economics will lead to self-empowerment of the functionaries. The division of labor between politicians, who make decisions, and the public servants who put policies into play, will be ruptured. A vague class arises in the middle with no real power to lead but also no professional self-discipline. This class uses power and sometimes decorates it 'with hopes of happiness,' as Weber says. This class tends toward self-drama, but fails to recognize questions of fate for the entire nation."

"Julian Assange can send loads of data around the world and never evince the slightest concern for world security. The 'revolution' mentioned with relish by masters of the Internet is really a game of delay. They avoid the pressing questions of the world; everything is just held in place in the (data-)stream."

"Of course the US government can't put up with wholesale public dumps of classified documents. But it needs to prevent them through an improved system of secret-keeping, not by constructing a questionable case in court. The real case against Assange is being built in Sweden -- a charge of sexual molestation. It just has nothing to do with WikiLeaks."

"Mikhail Khodorkovsky, the imprisoned ex-CEO of what was Russia's largest oil company, is another example of a flawed, uncompromising person who challenged the flawed people in power and their unaccountability. Such people do not die for our sins; they sin on our behalf, so we may live comfortably while they afflict the authorities at great personal risk and in disregard of (authorities' interpretation of) the law and sometimes even ethics."

"Assange's motives ... are not anti-American, but anti-authoritarian. He would argue ... that he has no power other than to authenticate and publish documents that others send to him about people with power, and thus that he has no obligation to reveal anything about himself."

"This is and should be the principle behind WikiLeaks and its successors -- to publish information that officials would keep secret, not information about private lives. In a world where governments, corporations, and other institutions have so much information about us, it is only right that we should have more information about them and about the activities of people acting on their behalf." 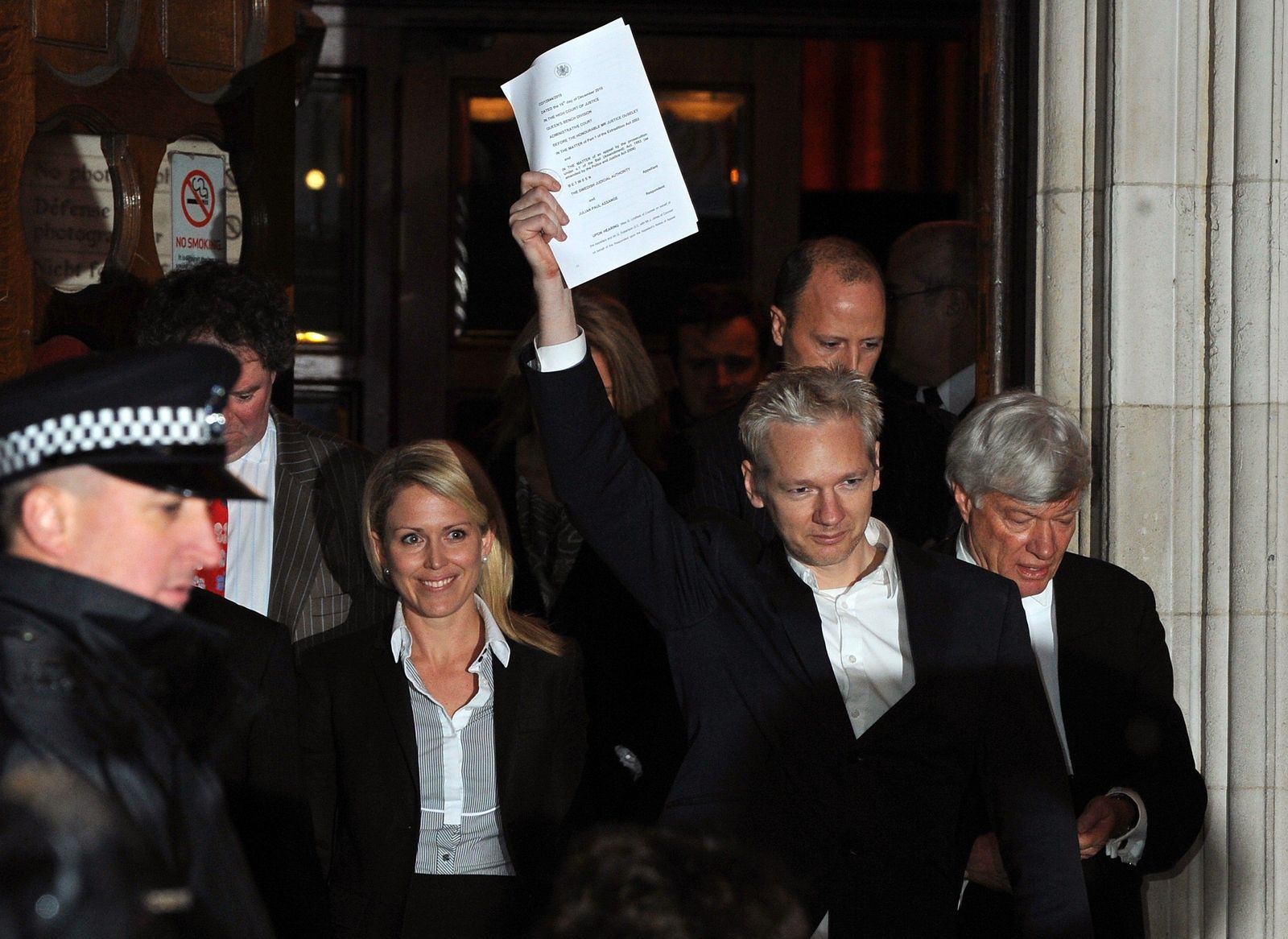 Grandstander or hero-nerd? Julian Assange in London on Thursday.