When the Friday finance summit in Washington, D.C. was first announced, many thought it could very well become a second Bretton Woods, a reference to the post-World War II conference in the United States which established global financial architecture for years to come. Now, though, with the meeting of leaders from 20 developed or developing economies just a day away, a number of leaders are doing what they can to dampen expectations. 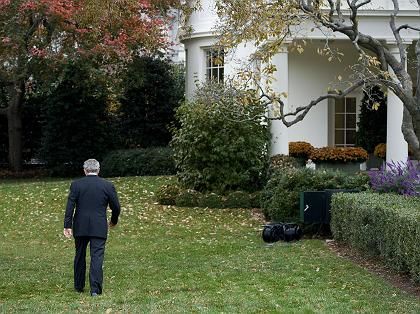 Many are concerned that US President George W. Bush will block far-reaching reforms.

Speaking in Washington on Wednesday -- where he was for a meeting with US President-elect Barack Obama -- French Foreign Minister Bernard Kouchner said: "I am not expecting big recipes coming out of the G-20 meeting. But I am expecting, particularly from the new administration, certainly a road map." Kouchner also said that US President George W. Bush could be a potential drag on financial system reform, according to the AFP. Kouchner's boss, French President Nicolas Sarkozy, has come out in favor of radical financial market reforms to improve oversight and to set up an international monitoring system for financial markets.

Bush, for his part, warned on Wednesday against abandoning free-market principles in the search for a solution to the financial freeze-up. Bush said the world "should fix the problems we have rather than dismantle a system that has improved the lives of hundreds of millions of people around the world."

In addition to the larger philosophical differences, there are also a number of disagreements when it comes to the finer points of any possible financial system reform. But Bush's international economic advisor Dan Price sought to play down those differences, saying on Wednesday that he expects "that leaders will want to come to an agreement on an action plan identifying specific implementation measures."

Still, with Obama not attending the summit, it seems unlikely that the US will be in a position to play much of a leadership role at the conference. German commentators on Thursday also voice their concerns about the conference and about other worrying signs from the global economy.

"Redesigning the global financial system is a historic challenge, and not one that can depend on the results of a single conference. One should see the Washington D.C. summit as the beginning of a process. ... Even if the next US president, Barack Obama, isn't there, it doesnt mean that the effort this weekend makes no sense."

"Globalization, though, makes such a reform more difficult. ... Experience from the first worldwide trade negotiations shows that it takes a long time. After a decade of talks, the world is still waiting for the first global trade agreement."

"A larger obstacle on the way to a new financial architecture is the role played by the US and Great Britain. They will have to give up power and influence. If the state seeks more control and if the finance houses and their managers have to take on more responsibility, then profits will by necessity be lower. In 2007, 40 percent of all company profits came in the finance sector. But the price bubble in real estate and on the stock markets can grow no further -- and the dreams of wealth held by many Americans and British will have to be abandoned. Herein lies the problem. Many lived well from the bloated financial sector, and Britain and America both gained tax revenues and international influence."

"Shrinking the sector would cost Obama plenty of strength and would require a large dose of courage. Many of his advisors from the economic establishment are warning him to tread lightly. ... But the time for unilateralism has come to an end. The only thing left for the US is to accept this unsavory piece of news."

The financial daily Handelsblatt looks at where changes might need to be made to improve oversight:

"Most of the proposals that have been made have missed the core of the problem. Where, after all, did the financial crisis begin? With the banks, of course. And what went wrong? The banks invested without paying attention to the risks and, in part, without even understanding those risks. Nevertheless, they took on those risks, passed them on to competitors and, using questionable structures, they hid those risks from the public and from the financial overseers. Preventing such practices would have been possible at the national level. It seems to have worked in Italy and Spain -- and even in Asia, banks seemed to have had only a limited role in the larger game."

"In short, the core of the problem is that the overseers underestimated the problem. In addition, they allowed dubious practices to persist because the banks -- often with support from politicians -- argued that they needed such practices in order to generate high enough returns to remain competitive on the international stage. Great Britain followed an especially aggressive policy of slack oversight in order to establish the City in London as a financial center. In Germany, overseers often ran into legal barriers: If they banned something without a clear legal foundation, the courts would quickly overthrow their decision."

"Now, the government has to provide greater leeway to financial monitors instead of making their jobs more difficult as they have in the past. That will require money, lots of work on the details and the political will to challenge the financial sector."