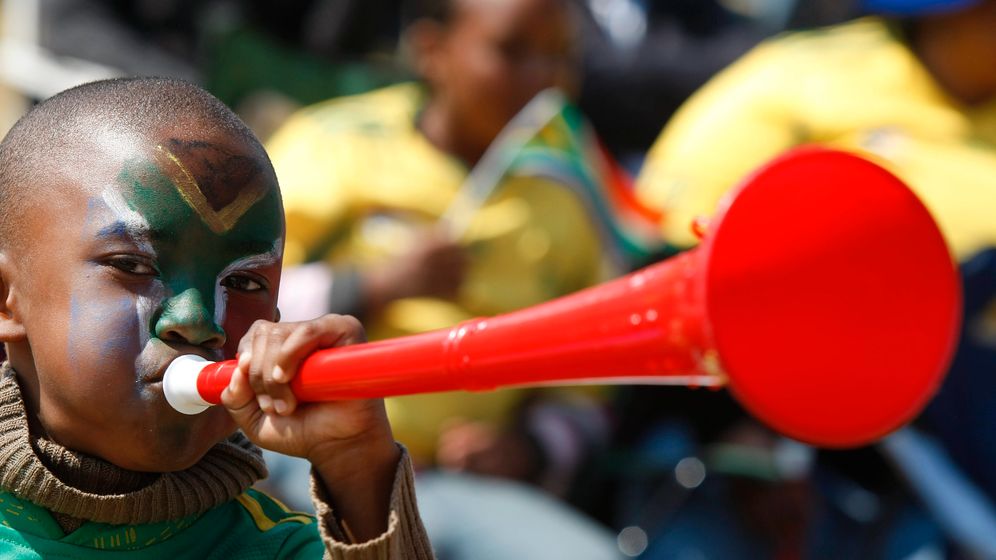 One of the biggest controversies of the FIFA 2010 World Cup in South Africa so far focuses on the South African fans' cheerleading instrument of choice -- the vuvuzela. The vuvuzela is a plastic trumpet, around a meter (about three feet) in length, that costs 20 South African rand (€2.10, $2.50) and makes a noise that has been described as everything from a giant swarm of bees to an elephant in distress to a terrific, tuneless din and "stadium tinnitus."

After only three days of World Cup games, international players in South Africa are already complaining about the trumpet, which has been a regular facet at the country's football stadiums since the 1990s. Players on the French national team say the noise keeps them from sleeping -- the horns start at dawn -- and that they cannot hear one another while on the field. Other players, including Argentinian team captain Javier Mascherano, have echoed those complaints. And at a press conference, Portugal's superstar Cristiano Ronaldo agreed, saying: "It is difficult for anyone on the pitch to concentrate." Finally, the president of the Japanese football association called the vuvuzela noise "unbearable."

Other criticisms of the vuvuzela include the fact that no other noise, like the sound of national anthems, can be heard above their drone, and that they ruin the atmosphere.

Vuvuzela Complaints Spread around the World

German television channels have received numerous complaints about the vuvuzela, with some viewers thinking the noise was due to a technical fault. The biggest problem for German broadcasters is that they receive the signal from another firm working in South Africa, Host Broadcast Services (HBS). A spokesperson for the French company told SPIEGEL ONLINE: "Eliminating or filtering the vuvuzela noise levels technically is not possible without affecting the whole signal." 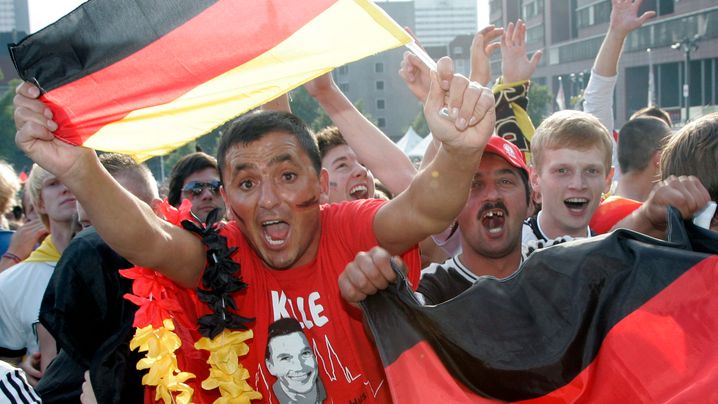 Asked whether it might help to have game commentators sitting in enclosed rooms, in order to lessen the vuvuzela noise, Dieter Gruschwitz, the head of the team at German public broadcaster ZDF responsible for World Cup broadcasts told SPIEGEL ONLINE that this would detract from the ambience. "Not transmitting the atmosphere is not an option for us," he said.

Addressing calls for a vuvuzela ban in an interview with the BBC, Danny Jordaan, the head of the World Cup organizing committee in South Africa, said that the vuvuzela would only be forbidden if fans started throwing the trumpets onto the pitch.

On Monday, German commentators offer mixed views of the vuvuzela noise. Plenty find it irritating, with the Frankfurter Allgemeine Zeitung describing it as "nerve-killing fanfare". But others feel the discussion about the plastic trumpets has wider implications, stressing that acceptance of the vuvuzela is also an issue of Germany's, and Europe's, tolerance of other cultures. Just as the debate over the vuvuzela is heating up, South African media are reporting that supplies of a brand of earplugs called "vuvu-stop" have almost sold out.

"Is it really appropriate to get annoyed about this fanfare now? The arguments against the vuvuzela started last year at the FIFA Confederation Cup (of 2009). They culminated in a demand to ban the tubular plastic instruments, and fast. But FIFA chief Sepp Blatter decreed that that the traditional instruments of South African football would be tolerated. He didn't want to alienate the hosts."

"Critics are far overestimating the affects of this concerto on the game. No team will lose just because 80,000 fans are making a lot of noise. If the television audience feels violated, they can just turn the sound down."

"The only reproach with any kind of validity is that the vuvuzela has become so popular because of commercial pressures. The brand 'Vuvuzela' has long been trademarked, and in Cape Town and in Germany, hundreds of thousands of the noisemakers have been produced by the company Masincedane Sport."

"Let's not kid ourselves. Of course the ongoing trumpeting of the vuvuzelas in South Africa's stadiums gets on your nerves. It has only been three days but it seems that many foreigners are already sick of one of the elementary components of South African football-fan culture."

"Will the South Africans give in (to a suggested vuvuzela ban)? They should not. At the very least because this problem had already been acknowledged. Over a year ago, the FIFA Confederation Cup was held in this same place ... with eyes wide open, the international governing body of football FIFA decided against banning the noisemakers."

"Banning the trumpets now would be the worst signal that FIFA could send to the organizers. Anyone who gives South Africa the World Cup to host and then raves about the vitality and enthusiasm of the place must also live with the consequences. If the special atmosphere in this location is sacrificed to the intolerance of those who are annoyed by the vuvuzela, that would mean that future football World Cups would also have to function according to European tastes. Vuvuzelas belong to South African football like battle songs belong to German games. We should accept this."

"There is music in football. The game has spawned its own choirs, hymns, coloraturas and celebratory calls. It's just a pity that, at the moment, we are not hearing any of these atmospheric sounds. Vuvuzela: The word has quickly become a global synonym for mood killer."

"Everything else is drowned out. Suffering through 90 minutes of a vuvuzela concert (during a game) is something of an achievement."

"At the start of the football World Cup it was supposed to be the buzzing of swarms of bees, the trumpeting of elephants and the clamor of life in South Africa that would make this competition -- aurally at least -- a whole new experience. The horns blown by fans, known as vuvuzela, were to be a symbol of the World Cup in South Africa ... a sign of the joie de vivre on the Cape."

"The football tournament is now three days old. The usual discussions about teams, tactics and goals are taking place -- but there is also an astonishing debate developing about the trumpets on the terraces. The bees have become angry wasps and the elephantine trumpeting in the stadium does not seem so friendly anymore -- instead it is an aggressive advance into the living rooms of those watching the game at home."