The oil slick spreads and criticism swirls: President Barack Obama has hit a rocky patch in his presidency. That impression was racheted up on Wednesday when Obama sacked General Stanley McChrystal, the man in charge of the Afghanistan mission who had mocked top US officials in comments to the Rolling Stone magazine.

In a move to quell the uncertainty, Obama named the experienced and highly disciplined General David Petraeus to replace McChrystal.

Petraeus, who oversaw the Iraq war turnaround and was McChrystal's boss, is to take charge of the Afghanistan mission at a awkward time. A total of 76 troops have died this month alone, making it the deadliest month in the war and fuelling domestic resistance.

Urging the Senate to confirm Petraeus swiftly, Obama emphasized the Afghanistan strategy he announced in December was still on track. "This is a change in personnel, but it is not a change in policy," Obama said. "I welcome debate among my team, but I won't tolerate division."

In the controversial Rolling Stone article, the general or those close to him sharply criticized Vice President Joe Biden and Karl Eikenberry, the US ambassador to Kabul. A close adviser to the general is also quoted as saying that McChrystal thinks very little of Obama's Afghanistan policies.

German Defense Minister Karl-Theo zu Guttenberg, who has supported the general throughout the controversy, voiced regret over McChrystal's sudden departure. "McChrystal was a very reliable partner," Guttenberg said. "I regret not being able to work with him any longer."

Guttenberg, who is responsible for 4,300 German troops stationed in the Afghanistan, said he did not expect there to be a change in US strategy. Germany, which has the third most troops in Afghanistan, in February decided to increase its presence in the region to 5,350 troops in order to bring deteriorating security under control. The additional troops are expected to deploy in July despite growing German opposition to the war.

German media commentators mull over th shift in power -- which also has implications for Washington's European NATO partners in Afghanistan -- on Thursday, warning it would hamper an already fraught Afghanistan mission.

"The post-9/11 occupation of Afghanistan has been littered with missed opportunities. This is shown by the extensive collection of strategies that have been agreed then shelved over the past nine years: Central or regional rule, civil or military presence, Parliament or Jirga, open war against the Taliban or commando operations, reconciliation or destruction. Much has been tried in Afghanistan but little has worked."

"Today's strategy bears the stamp of the current American president and was closely linked to the ex-commander, Stanley McChrystal. His departure sends a clear signal on the viability of the strategy. David Petraeus's appointment does not disguise the fact that the US policy on Afghanistan will now be steered by domestic politics. Because McChrystal publicly cast doubt over almost all the major US players in Afghanistan, he had probably given up faith in the mission."

"In Washington, a city not famous for its political patience, support for McChrystal ran out. There were tough military operations in the spring, the postponed and now practically given-up Kandahar offensive, the unpredictability of President Hamid Karzai -- and now frustration has been vented at the commander. In just under a year, he had come to stand for an arrogant Mr. Afghanistan, responsible for the success or demise of this last phase of the operation."

"Just as bad as this personalization of the project in McChrystal was Washington's impatience, reflected in the withdrawal date set by President Barack Obama. Both show how little this government understands about Afghanistan, where every consideration -- be it over personnel or the timetable -- is seen as a weakness and then exploited."

"The withdrawal of his main man in Afghanistan focuses public attention onto Obama's limited progress in Afghanistan. With the exit of Commander McChrystal, the man who designed and embodied the strategy, the outlook for Afghanistan has worsened."

"And Obama does not need any more bad news. The Gulf of Mexico oil spill has inflicted heavy damage on the US president's standing. He hesitated too long before exerting pressure on oil company BP. The Democrats are fearing sizeable losses in November's midterm elections in the US Congress."

"In fact, Obama is so beleaguered that even the speed of McChrystal's exit cannot be interpreted as a sign of strength. Instead in this scandal, as in the BP issue, the president appears to be a man at the mercy of public opinion."

"Obama's new man in the Hindu Kush, General David Petraeus, who accomplished a turning point in Iraq, has to save more than just the Afghanistan mission. And that task alone is difficult enough. The current strategy is already 'Plan C' and Washington cannot afford any more failures. If this approach doesn't work, then Obama could lose much more than just a general."

"The new command of General David Petraeus will not change much about the American strategy in Afghanistan. After all, as it stands, it is relatively successful. Obama and McChrystal were not split by a clash of strategy. The US president wants to reduce involvement in the region as of 2011. Ahead of that there are plans to increase the number of troops, to win over 'hearts and minds,' and to wear down insurgents. But months may pass before the new staff is established -- and they could turn out to be decisive months."

"Obama has given a firm deadline for Afghanistan: As of July 2011 at the latest, the US president will begin to end military involvement in Afghanistan. This is risky, though: If Petraeus doesn't succeed, the best options will all have been exhausted. Then there will be a severe danger that no one will believe peace will be possible anymore and Afghanistan will be downgraded to a purely anti-terrorist operation."

"For months Obama's vice president, Joe Biden, has never believed that Afghanistan could be 'turned around' and politically stabilized in the Western sense of the term. This brought him into conflict with McChrystal. It is also not the kind of plan that would please Washington's allies, since it would no longer have anything to do with 'nation-building' and 'civil society'."

"Petraeus now must do two things: politically, he must unite opposing factions within the US leadership. And militarily, he must succeed. That is essential if he is to stick to plans to begin an exit the country in a year's time." 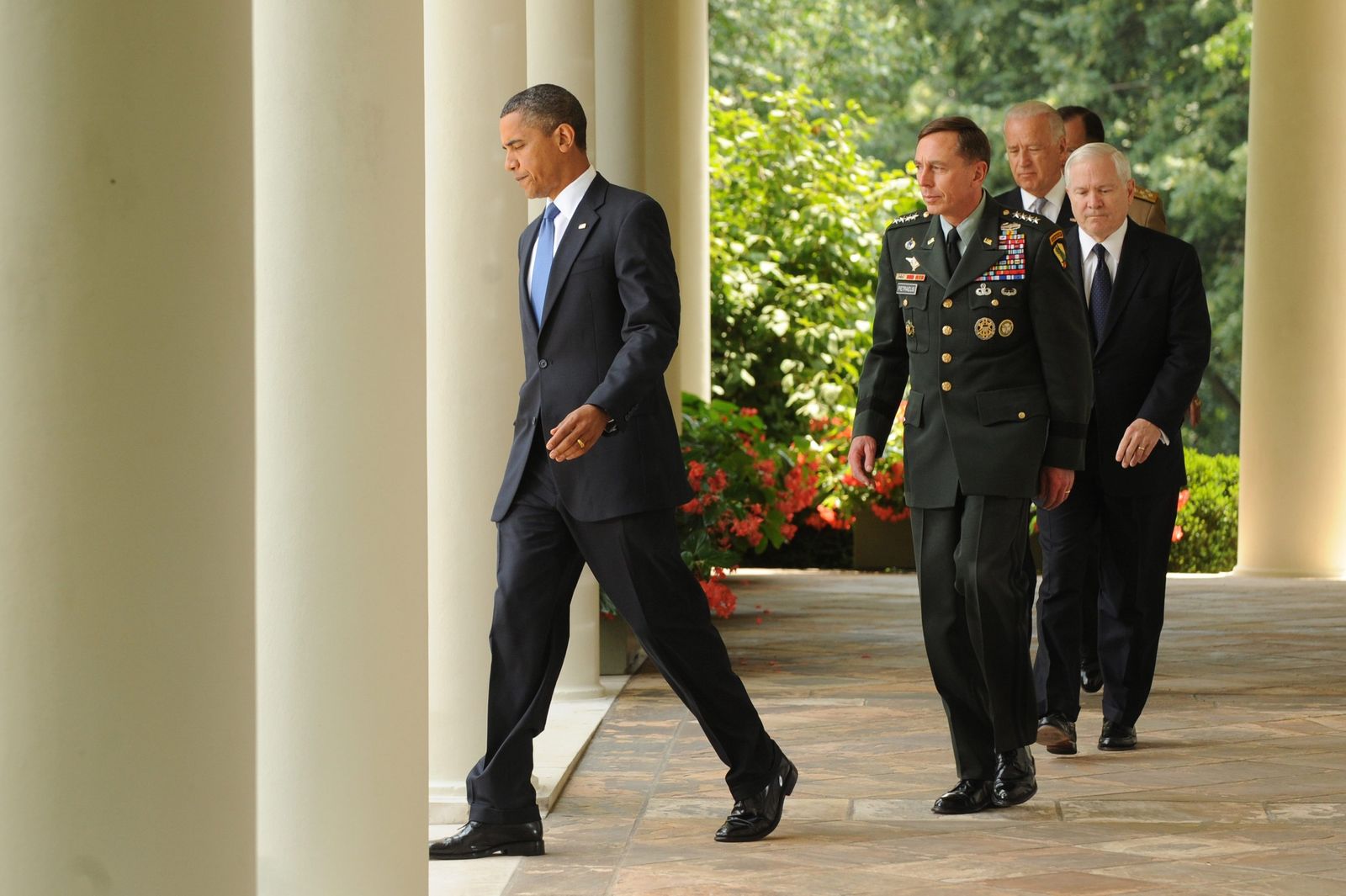 Trouble at the top: General David Petraeus is to replace Stanley McChrystal at the helm of the Afghanistan mission.