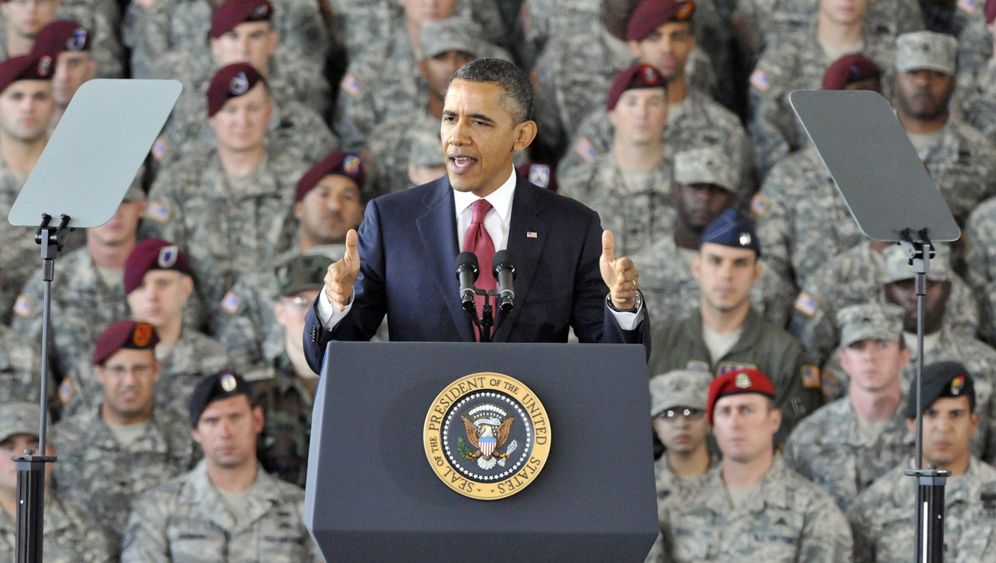 In May 2003, then-US President George W. Bush stood on the deck of an aircraft carrier in front of a banner reading "Mission Accomplished" and announced that major combat operations in Iraq had ended. At the time, few would have imagined that it would take another eight years before the US officially declared the conflict over.

On Thursday, the US military formally marked the end of the Iraq war with a no-frills ceremony in a fortified compound at Baghdad International Airport. The flag used by American forces in Iraq was lowered and symbolically cased to be taken back to the US. The around 4,000 American soldiers who remain in Iraq are due to leave by the end of the year.

"To be sure the cost was high -- in blood and treasure of the United States and also the Iraqi people," Defense Secretary Leon Panetta said at the ceremony. "Those lives have not been lost in vain. They gave birth to an independent, free and sovereign Iraq."

At a speech at Fort Bragg in North Carolina on Wednesday, President Barack Obama welcomed returning American soldiers home and spoke about the end of the conflict. "The war in Iraq will soon belong to history," he said. "Your service belongs to the ages."

Obama admitted that Iraq was "not a perfect place" and that it faced many challenges. "But we're leaving behind a sovereign, stable and self-reliant Iraq, with a representative government that was elected by its people," he said. "Because you sacrificed so much for a people that you had never met, Iraqis have a chance to forge their own destiny. … There can be no fuller expression of America's support for self-determination than our leaving Iraq to its people."

Many in America and elsewhere will continue to ask, however, if freeing Iraq from the dictatorship of Saddam Hussein was worth the high cost of the war. The conflict, which began in March 2003 with a "shock and awe" assault on Baghdad, left almost 4,500 Americans and over 100,000 Iraqis dead. Around 30,000 American soldiers were wounded, many of them permanently maimed as a result of the notorious improvised explosive devices (IEDs) which were used against coalition forces.

Today, the country is still racked by religious conflict, and there are fears that sectarian violence could flare up again. The country's political structures are weak and Iran continues to exert influence.

On Friday, German commentators take a look at the end of the Iraq war.

"During his election campaign, Obama would probably never in his wildest dreams have imagined that in December 2011, he as president would be praising Iraq as a beacon of democracy that shows the way for the troubled Arab world. Neither would he have imagined that he would see Iraq as a model for the peoples of the region who are seeking the right to democratic participation -- a model that justifies the costs of war and thus the American invasion. Barack Obama used to consider Bush's Iraq policies to be wrong and he rejected the war."

"At the end of this month, the last American soldiers are to leave Iraq… They leave behind a country whose institutions are still weak, whose leaders are not exactly shining examples of integrity and which is not immune to the risk of disintegration. It is a country where the infrastructure does not work reliably, where Iran is seeking to expand its influence and which -- last but not least -- has security forces that are lacking in professionalism and which have dubious loyalties. But it is also a country that is no longer in the grip of a despot, whose rule cost hundreds of thousands of people, perhaps even millions, their lives."

"At the time, al-Qaida wanted to take advantage of America's strength and make itself seem more important through a murderous crusade which it could stylize as resistance. The breathtaking provocation of 9/11 had the desired effect. Bush fell into the terrorists' trap, satisfying a national need for revenge by extending the war beyond Afghanistan and fighting injustice with injustice. America went to war in Iraq because it could -- because it was angry and incredibly powerful."

"America's current decline is the logical consequence of the over-extension that was visible everywhere in the early 2000s, including its military strength, bloated budgets and promises of growth, its foreign policy ambitions and the verbal radicalism which ultimately promised to forcefully create democracy at gunpoint. With this form of extremism, America betrayed its own best ideals. And in the process the country lost its natural attraction, which historically had repeatedly given hope to freedom-seekers and those fleeing persecution."

"Every American schoolchild knows today that George W. Bush's mission has not been accomplished. Iraq has not become the democracy that the neo-cons dreamed of, the overthrow of Saddam Hussein did not lead to democratization in the region and the regime in Tehran has not been weakened. On the contrary, Iran has more influence than ever in Iraq."

"And what about the people who were liberated? For them, life eight years after the start of the war is still dangerous. Everyday life, characterized by shortages of water and electricity, abuses of power by the police and the threat of attacks, is unspeakably difficult. There is one fewer dictator in the world, and that's a good thing. And the US has been able to contain the civil war that they unleashed. But the country that American troops are now leaving is not the 'sovereign and stable' nation that Obama spoke of in his speech at Fort Bragg. The US troops may indeed have conquered Baghdad in three weeks, but after eight years of occupation, they have still not won in Iraq."

"The last nine years of the American presence in Iraq is further proof that the political balance of power within a country can not be changed by an external military intervention. What the US experienced in Iraq, Israel also experienced in the war against Hezbollah in Lebanon. One can only hope that both have learned their lesson before they start planning military operations against Iran."

"If anything, the Iraq war did not accelerate the greatest shift of political forces of all time in the Arab world, but delayed it. With its interference in Iraq, the US did lasting damage to the concept of democratization. Afterwards, Arab dictators were able to curb the democratic aspirations of their own populations by asking if they really wanted an Iraqi-style democracy. If it hadn't been for the Americans' intervention, the Arab Spring might have broken out years earlier."