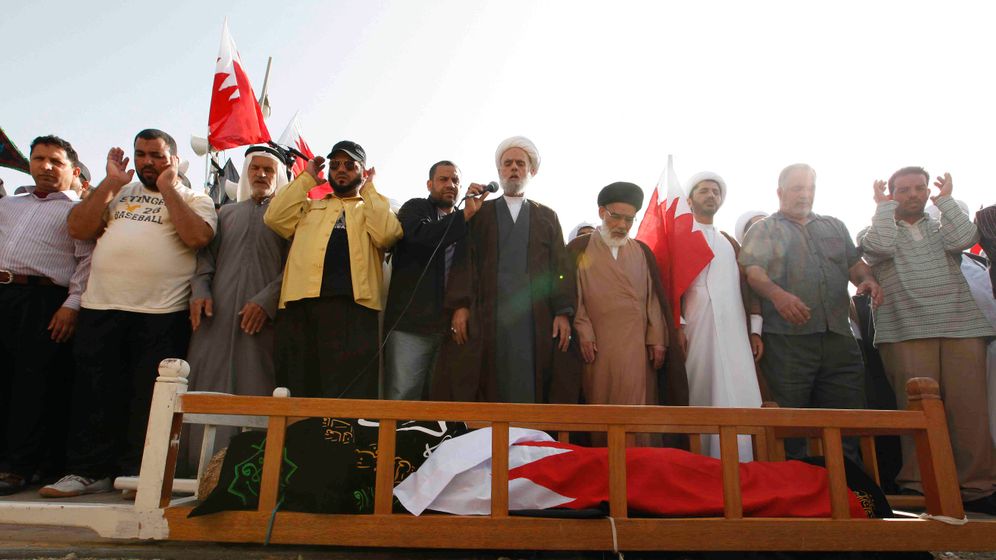 Eastern Europe in 1989 -- or Tiananmen Square? Observers are asking themselves which direction the in the Arab world will ultimately take. Will protesters succeed in bringing about peaceful change, as happened during the end of communism in the Warsaw Pact states? Or will there be a brutal crackdown such as that which the Beijing leadership inflicted on pro-democracy protesters in 1989?

As the rebellious mood spreads to Libya and Bahrain, developments in those countries have shown that pro-democracy protestors are not guaranteed success -- violent oppression by the regimes is also an all-too-real possibility.

In Libya at least 24 demonstrators have been killed in recent days, according to the non-governmental organization Human Rights Watch. On Friday the human rights group, quoting eyewitnesses, announced that security forces had fired on protesters to disperse crowds on Wednesday and Thursday. Media restrictions in the country mean that the true extent of the protests and the government crackdown is hard to judge.

On Friday, soldiers were out on the streets of Benghazi, Libya's second city, as thousands demonstrated against the killing of demonstrators by security forces. Pro-democracy activists had called a "day of rage" on Thursday, following the example of protesters in other Arab countries. So far protests have been mainly confined to the eastern cities of Benghazi and al-Bayda.

Moammar Gadhafi has ruled over Libya since 1969 and is the Arab world's longest-serving leader. Observers believe that the autocratic colonel will be harder to topple than other Arab leaders, due to his recourse to Libya's oil wealth. Indeed, the revolutionary leader has already tried to calm protests by doubling the salaries of civil servants.

In Bahrain meanwhile funerals were held Friday for the victims of a government crackdown on Thursday which left four people dead. Thousands of people taking part in the funeral processions expressed their anger at the authorities and called for the island state's ruling family to be toppled. Government supporters held their own counter-demonstration in the capital Manama on Friday.

On Thursday, authorities had cleared demonstrators from Manama's Pearl Square, which had been the epicenter of pro-democracy protests. According to witnesses, riot police stormed the square early on Thursday morning and used hollow-point bullets, rubber bullets and tear gas on protesters.

The demonstrators mainly belong to the country's Shiite majority and say they are repressed and excluded by the state's Sunni elite. Bahrain, which is ruled by a royal family, is the first affluent Gulf state to be affected by the protests.

The protests in Bahrain and Libya were inspired by the recent toppling of Tunisia's President Zine El Abidine Ben Ali and Egypt's President Hosni Mubarak. There has also been unrest in Yemen and Iran in recent days. The protests in the Arab world have been motivated by concerns about unemployment and rising living costs, as well as resentment against corruption and autocratic leaderships.

On Friday, commentators writing in Germany's newspapers take a concerned look at the escalating violence.

"The revolts in Tunisia and Egypt made the hearts of democrats beat faster. Western politicians suddenly discovered a love of self-determination in the Arab world and were full of praise for the achievements of the populations. And how tempting it is to see those events as the beginning of a trend that would bring freedom to the whole region."

"The deaths in Bahrain and Libya, however, are a reminder that things can also go in a different direction, following the historic example, not of Russia's perestroika, but of Tiananmen Square. If the European Union is serious about its sympathy for the Arab street, then it has to do everything in its power to prevent that from happening."

"The more repressive the regime is, the smaller are the chances of overthrowing it. Despite all the justified criticism of the West, which had tolerated pro-Western autocrats for too long, one also needs to appreciate the positive influence of Europe and the US. The West has tried time and again to expand what little leeway pro-democracy activists had, so that they could take advantage of it to achieve a breakthrough by themselves. Sustained Western pressure contributed to the fact that the Egyptian regime and military did not carry out a massacre in Cairo's Tahrir Square, as the Beijing leadership did in Tiananmen Square in 1989. Countries such as Syria, Iran and Libya, however, whose populations suffer much more (than the Egyptians), are also far less susceptible to Western pressure. It is thus all the harder for the populations there to get rid of their dictators."

"The constitutional monarchy of Bahrain does have a parliament and a Shura Council, each with 40 seats, but there are still no political parties worthy of the name. The Shiites have had little chance to get on the electoral rolls until now, and the members of the Shura are handpicked by the king anyway."

"This is the first time that the wave of unrest in the Arab world has affected one of the rich Gulf states, which had previously seemed to be immune to such protests, partly because of their higher living standards. But now the rulers of those states are watching the uprising in the tiny island monarchy with concern."

"Witnessing the overthrow of the Libyan revolutionary leader Gadhafi would certainly be a special pleasure. After all, the 68-year-old leader has created an especially perfidious system of repression during his 42 years in power. On Thursday, the 'day of rage,' hopes arose that Gadhafi might meet the same fate as Ben Ali in Tunisia or Mubarak in Egypt."

"But Libya is different. The social pressure in the country is lower. Six million Libyans are easier to control than 80 million Egyptians. With his oil money, it is easier for Gadhafi to buy himself peace -- with an eye to the demonstrations in Benghazi and other provincial cities, he simply doubled civil servants' salaries. Gadhafi's system works as long as it has beneficiaries -- and there are plenty of those."

"Gadhafi, who only trusts a few people but decides everything himself, has become increasingly out of touch with reality. … But when it comes to staying in power, Gadhafi is shrewd and brutally pragmatic. His power is based on his family clan, the army, the revolutionary committees and the ruthless secret police, and he knows how to play them all off against each other."

"Gadhafi has created a system that is difficult to reform. … It would be equally difficult to overthrow the system. It is debatable whether the mood in the country is ripe for a mass revolutionary movement."

"The forms of oppression in the Arab world are very diverse, in political, economic and religious terms. Hence the rebellions against that oppression are equally diverse in terms of their form, content, timing and causes. No state or regime, no matter how firmly ensconced, can be certain any more that it can survive the 'days of rage' unscathed."

"This turmoil offers the Western world a unique opportunity to completely reshape its relationship with the Arab world. But for this to happen, the old resentments that mainly associate the Middle East with fear, threat, terrorism and Islamism will have to be laid to rest. This should be the lesson that we take from the 'days of rage.'"