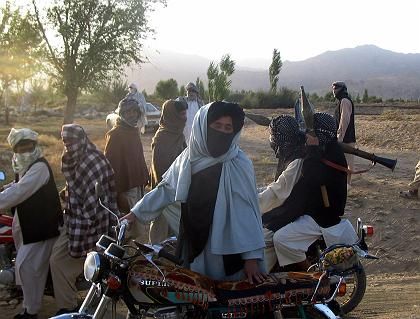 In war-torn Afghanistan, the Taliban is gaining ground again as it continues its insurgency. A report released Wednesday by the Senlis Council, an international security and development policy think tank, concludes that more than half the entire country is now under Taliban control.

"The Taliban's ability to establish a presence throughout the country is now proven beyond doubt," the report says, adding that "54 percent of Afghanistan's landmass hosts a permanent Taliban presence, primarily in southern Afghanistan, and is subject to frequent hostile activity by the insurgency."

The report, entitled "Stumbling into Chaos: Afghanistan on the Brink," is not merely a litany of depressing statistics. It also offers ideas to halt the spread of Taliban influence including a troop "surge." NATO forces, for example, should be doubled from 40,000 to 80,000 "as soon as logistically possible." It also recommends that all present caveats constraining troop deployment be removed and that Muslim countries should supply an additional 9,000 troops to supplement Western forces. And military efforts against the Taliban should extend their reach into Pakistan, with that country's permission.

More than 6,000 people have been killed in insurgency-related violence in 2007 as NATO forces continue to battle against the Taliban, particularly in the volatile south. On Thursday Secretary General Japp de Hoop Scheffer, in Kabul for talks with the Afghan government, admitted that the alliance needed to provide more troops for Afghanistan and more trainers for Afghan forces.

Some members of NATO's coalition forces disagree with the assessment set forth by the Senlis Council. Canada's Defense Minister Peter Mackay told reporters on Wednesday that the report was simply "not credible."

The report was released on the same day as an Oxfam assessment critical of the spending efforts inside Afghanistan by Western powers. "As in Iraq," the report claims, "too much aid is absorbed by profits of companies and subcontractors, on non-Afghan resources and on high expatriate salaries and living costs."

Both reports are grim. Oxfam notes that "the absence of community participation, or association with the military, has led to projects which are unsuitable, unused or targeted by militants." And the Senlis report concludes that "it is a sad indictment of the current state of Afghanistan that the question now appears to be not if the Taliban will return to Kabul, but when this will happen and in what form."

Meanwhile on Thursday Afghan President Hamid Karzai said that Taliban leaders were increasingly contacting him to try to find ways of making peace. "We are willing to talk," he told reporters in Kabul. "Those of the Taliban who are not part of al-Qaida or the terrorist networks, who do not want to be violent against the Afghan people ... are welcome."