Here at least, things seem to be safe. The grounds of the German consulate in downtown Mazar-e-Sharif, Afghanistan are surrounded by a massive concrete wall. The Americans turned the former hotel into a fortress before they rented it to the Germans: There are vehicle gateways with automatic steel gates, thick bullet-proof window panes, panic rooms and heavily armed police officers in combat uniforms.

On this sunny afternoon in early February, Hayatullah Jawad is tasked with conveying the truth to the German Interior Minister in the consulate's unadorned conference room. "Everyone who can is currently leaving the country," the migration expert says, before letting the sentence sink in for a moment.

Thomas de Maizière only has one question: Why? "There are three reasons," says Jawad. "Firstly: the departure of foreign troops. The people don't believe that the Afghans can take care of security by themselves. Secondly: It is simple to reach Europe." And thirdly? Jawad keeps a straight face. "Smiley government." German Chancellor Angela Merkel's message of welcome to the refugees has made all the difference, he says. Everyone is getting a passport as quickly as possible. After all, who knows how long the German government's warmth will last.

And it can't last. There are simply too many. Since the fall, the number of Afghan refugees who reach Germany has grown markedly. In the past year they represented the second largest group among asylum applicants. This January, one out of five refugees registered in Germany came from the Hindu Kush region.

If Merkel wants to lower the number of refugees as she has pledged to do, then the chancellor absolutely needs to take Afghanistan into account. But it's a difficult proposition. Since its military intervention a decade and a half ago, the West has carried a special responsibility for the country -- a land that is now once again in danger of sinking completely into civil war. The idea of categorizing Afghanistan as a safe country of origin, like the Balkan states, is unthinkable. On the contrary: The security situation is getting worse. If it continues along these lines, millions of Afghans could be entitled to protection under the Geneva Convention. And the smugglers on the route to Europe are highly professional. This maelstrom is a nightmare.

In order to have more power to deport people to Afghanistan, the government has declared part of the country safe. But the Taliban are constantly expanding their influence. The government in Kabul is weak, the economic prospects are dire. "Afghanistan is at serious risk of a political breakdown during 2016," US Director of National Intelligence James Clapper recently said during a Senate hearing.

Despite this, the German government is hoping to convince a high four-digit number of Afghans to voluntarily make the return trip. A week ago, 125 Afghans returned to Kabul in a Czech charter plane with the media watching. In exchange, Germany is giving them €700 ($760) for a new start in their homeland.

But according to current plans by the government, rejected asylum applicants who do not want to return of their own free choice will soon also be deported in larger numbers. According to an internal German government memo, forced repatriations will be "tackled" in a next step, which is already being prepared behind the scenes.

This marks yet another change of direction in German asylum policy. For years, a general ban on deportations to Afghanistan had been in place, with only 47 people having been sent back to the country since 2011. Last year, just nine were sent packing.

Deportations to Afghanistan are morally dubious, laborious and costly. But the interior minister doesn't see any alternative. In 2015, three times as many Afghans applied for asylum than in 2014. In total, 154,000 refugees came from the Hindu Kush. A further 18,099 were registered by the authorities this January. For that reason, measures like the one taken last Wednesday are mostly meant to have a symbolic effect. De Maizière is hoping that the news will spread around Afghanistan that the generous times have passed. The welcome mat has been rolled up.

Since the withdrawal of the International Security Assistance Force's (ISAF) protective troops in 2013, the security situation in the country has deteriorated dramatically. "There are safe provinces and there are less safe provinces," de Maizière said during his visit in early February -- an optimistic description. A Western diplomat in Kabul expresses it this way: "There are unsafe and less unsafe provinces."

In practice, the Interior Ministry is already well aware of this. Each week the officials of the Group 22 in the Federal Office for Migration and Refugees (BAMF) compile an Afghanistan briefing based on the most up-to-date information available. It is a litany of horrors: military clashes, suicide bombings, kidnappings, assassinations. According to the latest statistics released by the UN's Afghanistan mission, the number of civilians injured or killed last year -- 11,002 -- is the highest since the toppling of the Taliban.

In order to determine the level of security in a province, the German Federal Administrative Court has developed a macabre "body count" calculus. If the ratio of civilian victims to overall inhabitants is lower than 1:800, then the risk to life is too low to receive protection in Germany.

The last thorough situation analysis by the German Foreign Ministry and the BND foreign intelligence service makes for grim reading. It describes a "downward spiral." The "performance, reliability and operational morale" of the Afghan army is sinking and after the Taliban's brief conquest of Kunduz in September 2015, the militants see themselves "justifiably in a position of strength against the government." In addition to the Taliban, the Islamic State terror militia is also gaining a foothold in some provinces.

For the BAMF and the German administrative courts, the situation is has become rather chaotic, with officials left to answer some very tough questions. Is someone who flees from the Taliban in Kunduz safe in Kabul? Does a man have a right to asylum in Germany if he is supposedly being forced to fight by two opposing militias and he'd rather stay neutral? Can a feud between two rival clans be a justification for asylum? Or a planned forced marriage?

According to an internal report by the German Foreign Ministry about the "situation pertaining to asylum and deportation" the status of women has improved since the end of Taliban rule, but their human rights are "still frequently violated" by way of abuse, forced marriages, sexual assaults or murder. Children have been forcibly recruited, sexually abused and afterwards sometimes killed. "Within the ranks of army and police in particular," it claims, the sexual abuse of children and youths is a "large problem."

Still, the German Foreign Ministry has picked out individual regions in which "the situation is comparatively stable despite selective security incidents." In the view of the German government, rejected asylum applicants can be sent to these provinces.

BAMF is now expected to investigate more thoroughly whether "domestic refuge alternatives" are feasible -- ie. whether it is imaginable that a person could stay afloat in one of the country's safe regions. They are considering young men who are fit to work, who are neither pursued by the Taliban nor persecuted for their religion, and merely made the journey to Europe with the hope of a better future.

Members of the German government believe the new guidelines will lead to a decrease in the number of Afghan applicants ultimately granted asylum status. But it's unclear whether the calculation will pay off. The administrative courts have the final word in decisions. These courts can also be soft in their rulings.

It's 9 a.m. on Feb. 23 in a Berlin court. A young Afghan stands in front of Administrative Judge Claudia Perlitius. With its green carpet and gray chairs, the environment has an aura of bureaucratic sadness. The Afghan's application for asylum has been rejected by BAMF, and now he is taking legal action against it. The man grew up in Iran, which isn't rare: About 1 million Afghans have fled to their neighboring country.

The judge explains clearly that the man has no right to asylum in Germany because he is not being persecuted in Afghanistan. And the so-called subsidiary protection as a refugee from civil war doesn't apply to him. But during questioning, it becomes clear that the man doesn't have any contact with his relatives in Afghanistan. The judge decides it is untenable to send a man to Afghanistan who has no network of family there to provide him with support. The judge lifts the deportation and orders that the man can stay in Germany.

After Syria, Iraq and Eritrea, it is Afghans who are most frequently granted asylum status in Germany. And even a rejected application doesn't necessarily result in deportation. Obstacles could include medical treatment that cannot be interrupted, or a missing passport. Of the approximately 200,000 foreigners who are set to be deported in Germany, the orders have been dropped in almost 150,000 of those instances.

News of that fact has also spread in Afghanistan. Reports on social media suggest that Afghans have little to worry about in terms of getting deported back to the Hindu Kush, an internal Foreign Ministry memo states. This, in turn, has spurred the refugee smuggling business in the country, where market forces appear to be alive and well. High demand has created a wide array of offerings, sophisticated infrastructure and sinking prices in trafficking.

One and a half years ago, migration expert Hayatullah Jawad explains, his uncle had to pay $15,000 to get his relatives to Vienna. Their trip took three months. Now an entire family can come to Europe via Iran or Turkey in only 12 days for the same price.

'Have You Thought About It?'

That's what Hussain Saydi wants. The electrical engineer is a member of the Shiite Hazara minority. He comes from the Qarabagh district in the eastern part of the country. Now he's sitting in the living room of a friend in Kabul. Saydi is waiting for his passport, and next week he wants to leave -- for Germany.

As an employee at a human right's organization, the 28-year-old once wrote an article about the "double standard" of men who believe themselves to be good Muslims because they attended the mosque, but don't allow their wives or daughters to leave the house or go to school. After it came out, the Qarabagh ulama, the local council of Muslim clerics, summoned him, at which point Saydi says he was threatened. Now he's planning his escape together his wife, who studied business administration.

It's expected to cost $10,000, with each smuggler immediately receiving a portion after performing his part of the service. Arrival in Germany is guaranteed.

None of this is good news for Thomas de Maizière. That's why the German government is now testing a Facebook campaign to try to deter young Afghans from fleeing to Germany. Large signs in Pashtu and Dari read: "Leaving Afghanistan? Have you given this careful consideration?" It sounds rather discursive and many people wouldn't consider that much of a deterrent. The Australians, for example, air ads on Afghan television that dispel any illusions. They show a grim officer in a uniform: "If you travel by boat without a visa, you will not make Australia home. There are no exceptions!" 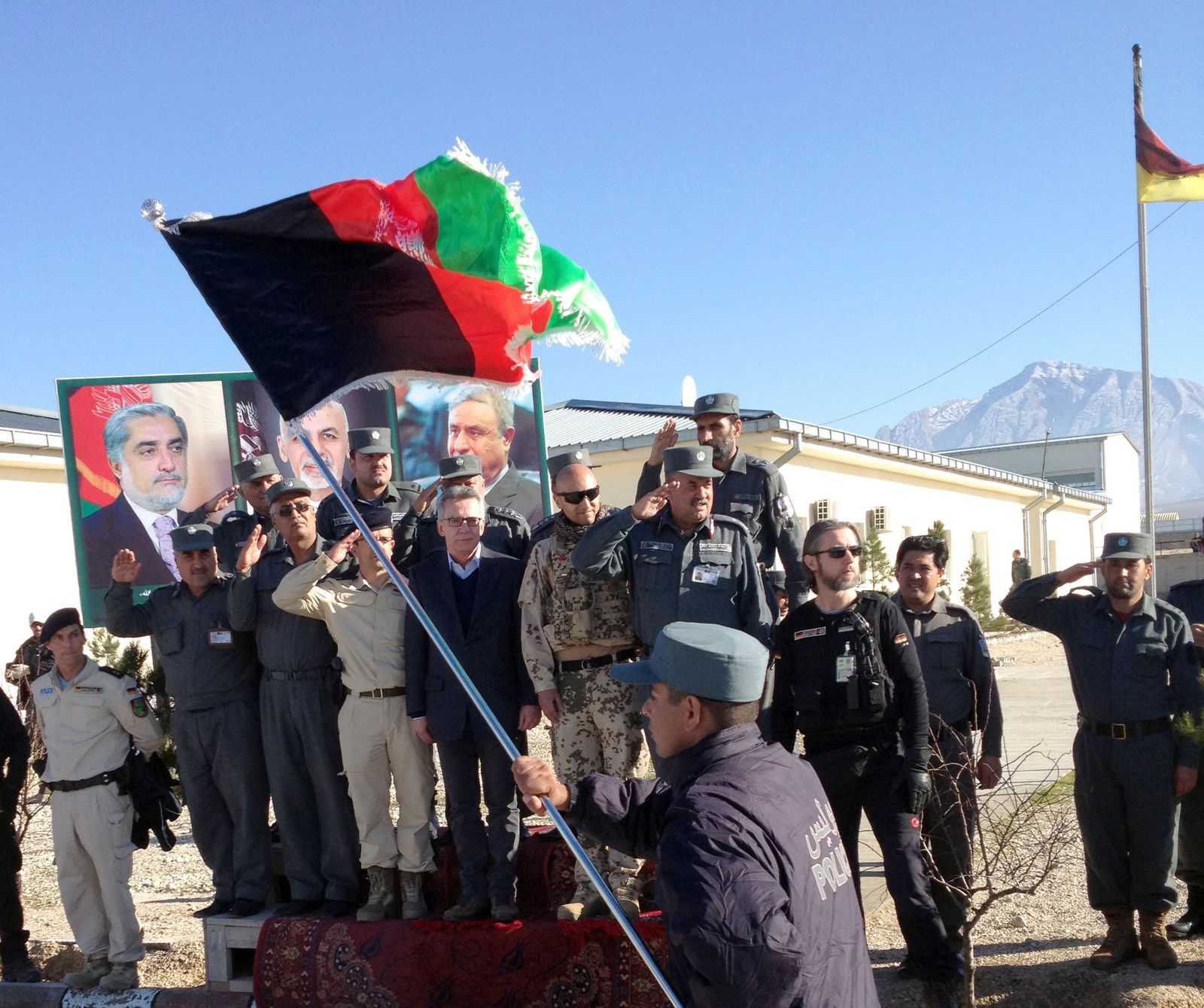