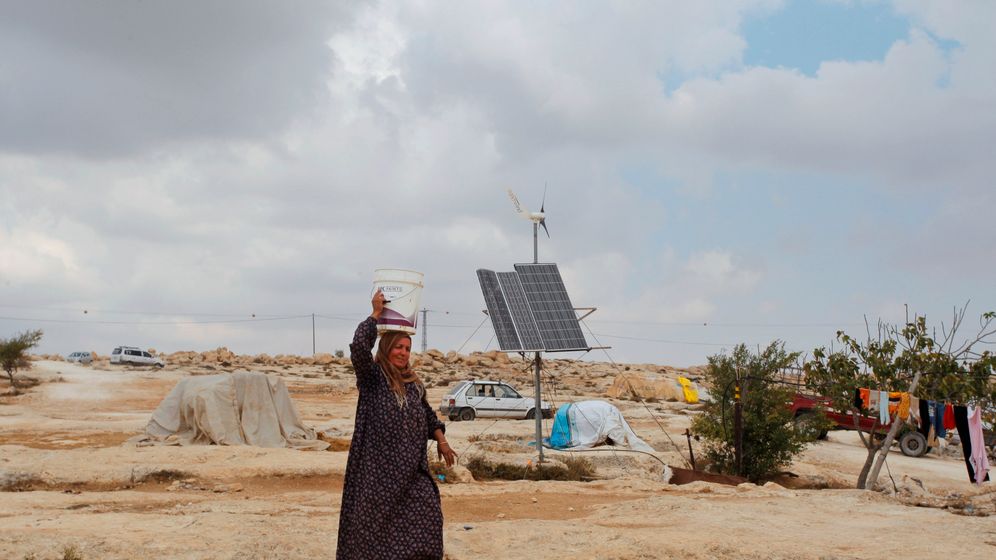 The best part is when the lights in the tents go on, one by one, says Elad Orian. Electricity here, in the hills south of Hebron, was long unreliable. Either it was not available or it was too expensive, produced for just a few hours each day by a noisy, diesel-guzzling generator. That changed when Elad Orian and Noam Dotan, two Israeli physicians who had tired of conflict, came along three years ago and installed solar panels and erected wind turbines. Since then, such facilities have been installed in 16 communities, providing 1,500 Palestinians with electricity.

The women here no longer have to make their butter by hand; they can refrigerate the sheep's cheese, which is their livelihood; and their children can do their homework at night. Now they can sit together and watch TV -- and connect to a world that seems far removed from their lives on the edge of the Judaean Desert. It is but a small revolution, achieved at little cost. But it is a good example of successful development aid.

The success, though, could soon be a thing of the past. Israel has threatened to tear them down with five municipalities in recent weeks having received "stop work" orders -- the first step on the road to demolition. The problem is that the facilities are in the so-called Area C, which covers 60 percent of the West Bank and is administered by Israel. Permission from the Israelis is a requirement before construction projects can move ahead -- and permits are almost never given to Palestinians.

The result is that Area C residents face poor roads and a lack of electricity and water. Farming is impossible, and the construction of factories forbidden. As a result, only 150,000 Palestinians live in Area C -- and 310,000 well-supplied Israeli settlers. The solar project helps make life a bit more bearable for Palestinians in Area C. That, though, would appear to be something that Israel does not want.

"The demolition orders are meant to send a clear signal to all European Union countries: Do not interfere, do not invest in Area C," says project founder Noam Dotan.

Some of the facilities have already been there for two years, which makes it hard to believe that they have only just been noticed now. Above all, the decision sends a signal to Germany which has provided most funds for the project, or a total of roughly €600,000 ($791,300). The project was carried out by the aid organization Medico International in cooperation with Comet-ME, the organization founded by the two Israeli physicians.

European diplomats in Ramallah and Tel Aviv suspect that the demolition orders are a reaction to a recently drafted, unusually critical EU report on the situation in Area C. It states: "The window for a two-state solution is closing rapidly with the continued expansion of Israeli settlements." The conclusion: The EU needs to target investment in economic development and improved living conditions of Palestinians in Area C.

A few months ago, a similar project co-financed by the Spanish government was scheduled for demolition, something which has been prevented thus far through massive diplomatic pressure.

Projects funded by foreign aid organizations or the EU have often been destroyed in the past, the best known example being the Gaza airport, financed with $38 million from the EU only to be destroyed by Israeli bombs a short time after its construction. Generally, though, the demolitions have been the result of security concerns. The fact that harmless solar cells -- installations which are funded by allied countries to provide basic humanitarian needs -- are at risk of demolition is a new development.

As such, when German Foreign Minister Guido Westerwelle traveled to Israel two weeks ago, he not only spoke to Prime Minister Benjamin Netanyahu and Defense Minister Ehud Barak about the peace process and Iran's nuclear program, but also about wind turbines and solar panels in places like Shaab al-Buttum.

Hundreds of people live in the village, and they are the poorest of the poor. A community of shepherds, they moved freely through the area until Israel occupied the West Bank in 1967. Since then, they have settled, collecting rain water during the winter and buying expensive drinking water brought in by a truck along a gravel track in the summer. A well-maintained road to the settlement doesn't exist, despite the fact that Shaab al-Buttum lies between two Israeli outposts. The settlements are illegal, but miraculously they have all the basics their Palestinian neighbors are missing: electricity, water and roads.

However, over the past four months, two wind turbines and 40 solar panels have supplied the villagers with energy: 40 to 60 kilowatt-hours each day. It is just enough to heat one square meter of a well-insulated house for a year -- or enough to supply a whole village.

Since the arrival of electricity, Israeli anthropologist Shuli Hartman, 60, has been living in the village. She wanted to find out what electricity does to people. She observed that women have more time because their workload is reduced and they can earn more. She saw they became more independent, using mobile phones, which they couldn't even charge until recently. And she saw how a village in which every family used to struggle to survive is now learning to become a community. An elderly villager told her: "Electricity for us is like water to a person walking through the desert." Her life has become a bit easier as a result of the mini-power station.

Last but not least, the project has brought together Israelis and Palestinians. "The Palestinians here had previously only known Israelis as settlers and soldiers," says Hartman.

"We did not want to just demonstrate and remain part of the conflict; we wanted to be part of the solution," explains Noam Dotan. But a solution is apparently not wanted. In the absence of a small miracle, the tents in Shaab al-Buttum will soon be dark once again.