Now, it is up to Europe. U.S. President Donald Trump has decided to withdraw from the nuclear deal with Iran in the most brusque possible manner. There is no waiting period, no attempts at mitigation. The marching orders are clear: the greatest confrontation possible.

For Europe, the stakes are enormous. It is no longer merely about ensuring that Iran doesn't get the bomb. Rather, the world is faced with an uncontrolled, global nuclear arms race. The already tenuous stability in the Middle East is likewise in grave danger. And finally, Europe is facing the potential loss of what has been the most important, most reliable and most beneficial constant of European foreign policy for decades: the partnership with the U.S. and the trans-Atlantic relationship.

The U.S. has chosen a path of confrontation with Europe. Neither Macron's advances nor Merkel's sternness were able to prevent Trump from taking this step. In the seven decades of the postwar trans-Atlantic relationship, there has never been such a violation of European interests, never such deep-seated discord. When France and Germany elected not to follow U.S. President George W. Bush into Iraq in 2003, the dissent came within the framework of an intact partnership. It was a serious disagreement, to be sure, but it didn't threaten the foundation of the relationship.

This time, it is different. This conflict has the potential to escalate into a real confrontation between Europe and the United States. In a worst-case scenario, Trump could force Europe to make a choice between the U.S. and Iran. If you're not with us, you are against us.

Europe finds itself facing a diplomatic challenge that is almost impossible to solve. On the one hand, Europeans must seek to prevent the Americans from further escalation. On the other, they are tasked with convincing Iran not to give up on the deal themselves.

The Vital Interests of Germany and Europe

To do so, European leaders must first agree with the nuclear deal's remaining signatories - Russia and China - on what steps must now be taken to keep Iran on board. Europe cannot allow itself to be used by Trump to isolate Iran. On the contrary, Europe must make it clear to Washington that the U.S. is isolating itself on this issue. There is a global community that wants this agreement - and there is an American president who is, with support from Israel and Saudi Arabia, seeking to torpedo it.

It is in the vital interests of Germany and Europe that Iran continues to adhere to the treaty. If it doesn't, the consequences could be dramatic: It is likely that not just Iran would seek to arm itself with nuclear weapons, but also other powers in the region like Saudi Arabia or Egypt. It would mark the de facto end of the Treaty on the Non-Proliferation of Nuclear Weapons. The entire system established to control the spread of nuclear weapons would be in danger.

The danger would be no less great if Israel or the U.S. were to launch military strikes in an attempt to prevent Iran from continuing its nuclear program. The risk of military escalation in such a case would be significant, with Tehran potentially responding with attacks carried out by its proxies against Israel or against American troops based in the region. Furthermore, Iran has placed many of its nuclear facilities underground, making them much more difficult to destroy than, for example, the Syrian reactor bombed by Israel in 2007.

On the weekend prior to Trump's decision, Iranian President Hassan Rouhani made clear just how important Europe's reaction would be. It wasn't Trump's decision that would be decisive, he said, but "whether the Europeans distance themselves from his stance or not."

Europe, Russia and China must now make an offer to Iran. That is the only way to help reformers in Tehran stand up to hardliners in the country who would like to continue building a bomb. Thus far, Iran has adhered to the agreement even though many of the economic benefits the country had hoped to reap from the deal have failed to materialize. Now, it will be important to prevent European companies from pulling out of Iran.

That, though, will be difficult. Trump has threatened companies with punitive measures should they continue doing business in Iran. And the incoming U.S. ambassador to Germany, Richard Grenell, tweeted on Tuesday that "German companies doing business in Iran should wind down operations immediately." It won't be easy for Europe to protect its economy from U.S. retaliatory measures, even if France announced on Wednesday that Europeans will "do everything" to protect their companies in Iran.

It still isn't clear how far the U.S. will go to force Europe into an anti-Iran alliance. Trump could exert economic pressure, of course, but he could also take a further step into security policy. He could threaten to weaken NATO solidarity if Europe doesn't join forces against Iran. That would be a catastrophe.

Still, the Europeans need to be clear on one thing: Trump has never been impressed by docility. Europe will now need to muster all of its diplomatic skill and lean on its international alliances. More than anything, though, Europe needs a strong conviction to reject anything that harms its own interests and endangers world peace. 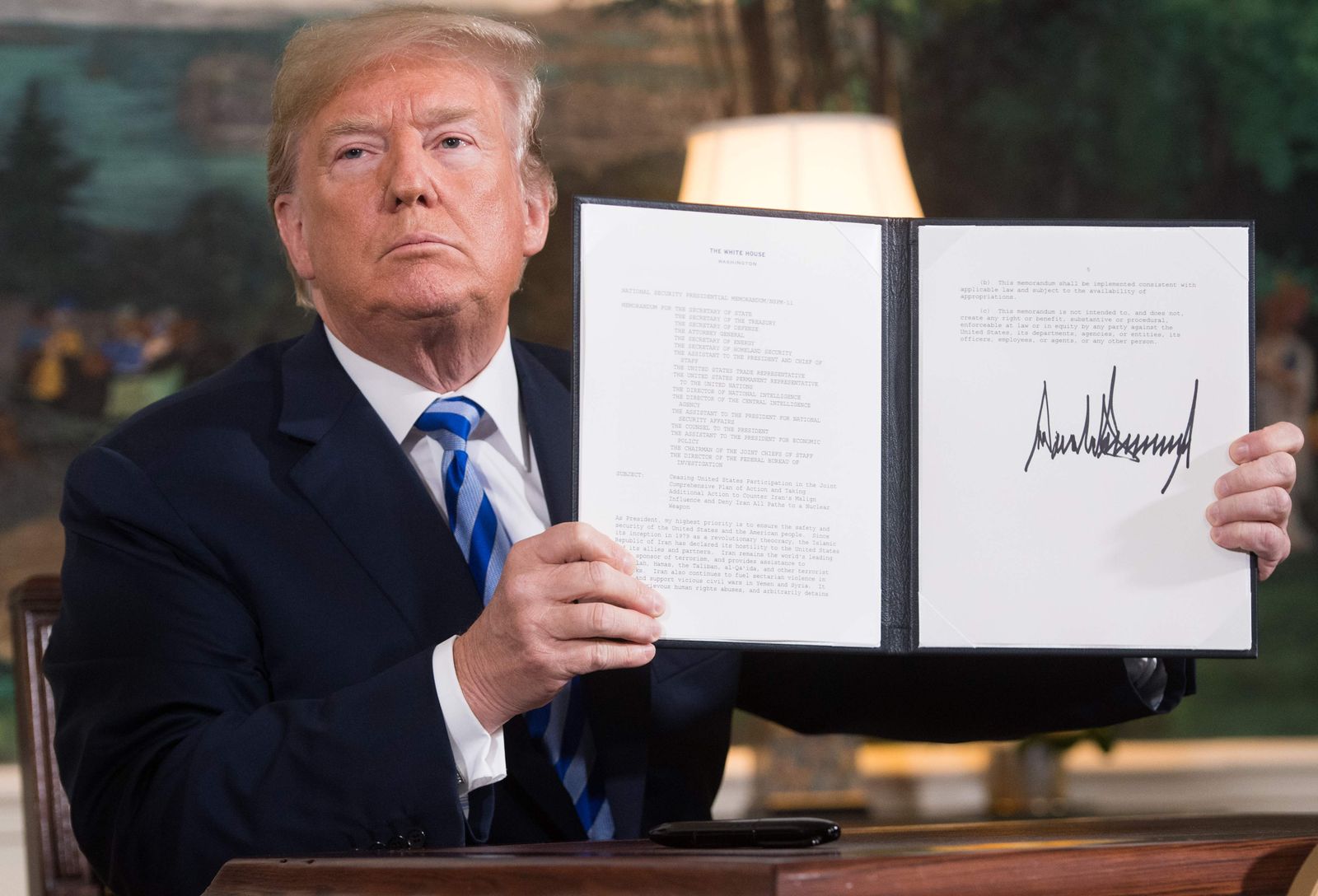