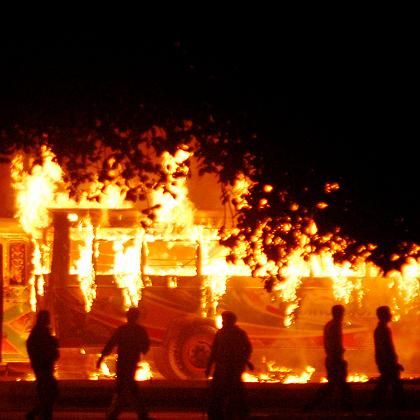 JULY: Radical religious students occupy the Red Mosque in Islamabad. Over 100 people die when the police storm the compound on July 10. At least 13 suicide attacks follow, in which more than 140 people die. On July 21, Chief Justice Chaudhry is allowed to resume his post.

AUGUST: At least 13 people lose their lives in three suicide attacks concentrated in the northwestern region of the country.

SEPTEMBER: At least 61 people die in four suicide attacks. In two attacks on Sept. 4 in Rawalpindi, 25 people die and 70 are wounded by the explosions. On Sept. 10 Former Prime Minister Nawaz Sharif arrives at Islamabad's airport after seven years of exile. After briefly being detained, he is denied entry and flown to Saudi Arabia.On Sept. 28, the constitutional court publishes its decision that Masharraf may stand for the presidential elections even though he is still the country's military chief.

OCTOBER: Musharraf is confirmed as president by the national and provincial parliaments, although opposition parliament members boycott the election. On Oct. 18, after eight years in exile, opposition leader and former Prime Minister Benazir Bhutto returns to Pakistan. A suicide attack on her conveyduring her welcoming parade in Karachi leaves over 140 people dead. Bhutto narrowly escapes the attack.

NOVEMBER: Masharraf declares a state of emergency. Chief Justice Chaudhry is once again deposed. Four men die in an explosion at the house of Federal Minister for Political Affairs Minister Amir Muqam in Peshawar. Two suicide car-bomb attacks on soldiers kill 15 people in Rawalpindi on Nov. 24. The next day, former Pakistani Prime Minister Nawaz Sharif is allowed to return to the country after seven years in exile. On Nov. 28 President Musharraft steps down as head of the military.

DECEMBER: The Election's Commission blocks Sharif's nomination for January's parliamentary elections, which leads the opposition to abandon its plan to boycott the elections. A suicide attack in the area of Charsadda on the border with Afghanistan kills 48. Aftab Khan Sherpao, federal interior minister and presumed target of the attack, escapes unwounded. A suicide bomber in a mosque in northwestPakistan kills at least 50 people during Eid festival prayers. At an election event on Dec. 27 for Nawaz Sharif in Islamabad, three people die as a result of gunfire. Later in the day, Bhutto is killedby a suicide bomber in Rawalpindi. At least 20 others die in the blast.