Germany's two main political parties, the conservative Christian Democrats and the center-left Social Democrats, may have locked horns as election campaigning in Germany begins in earnest. But when it comes to the state of the domestic economy at least, the two rivals are, as of last Thursday, on the same page -- and united in their determination to not be overly optimistic.

"We have reached the bottom of the trough," Chancellor Angela Merkel announced, only to quickly dampen any enthusiasm that statement might have aroused. Times are still tough, she added, and the crisis isn't over by a long shot, "just because there has been a slight improvement for the first time."

A few hours earlier, the Federal Statistics Office in the western city of Wiesbaden had declared an end, albeit a preliminary one, to the worst recession in the history of postwar Germany. In the second quarter of 2009, the statistics experts announced, the German economy grew by 0.3 percent compared with the first quarter.

In light of the preceding dramatic declines, there was little reason for excessive enthusiasm, which explains the hesitant approach taken by the members of Merkel's cabinet.

"There are more and more indications that things are slowly going upwards again," said a cautiously optimistic Finance Minister Peer Steinbrück, who belongs to the SPD. Even Economics Minister Karl-Theodor zu Guttenberg, a member of the CDU's Bavarian sister party, the Christian Social Union, kept his comments muted. "We should be encouraged by these numbers," he said, but simultaneously cautioned against euphoria.

But after months of bad news, including recurring bank troubles, company bankruptcies and sharp declines in production, other observers were surprisingly quick to express their relief. "Germany is awakening from the recession," the respected center-left broadsheet Süddeutsche Zeitung wrote in its cover story. And the Financial Times Deutschland struck a note of celebration: "The German economy is taking off once again."

Even professional observers of the economy could hardly believe their eyes. "It's really a bit surprising," admits Gustav Horn, the head of the Macroeconomic Policy Institute (IMK), which has links to Germany's unions. Like many of his fellow economists, Horn had expected zero or slightly negative growth.

In any case, economies worldwide appear to be recovering from the state of shock induced by the crisis. The news coming from the United States, the epicenter of the economic tremors of the last two years, is surprisingly positive. The rate of growth is beginning to pick up, the wave of job cuts is slowly subsiding and many companies are already taking a more optimistic view of the future.

On the other hand, foreclosures are at a record high in the United States, a repercussion of the American real estate crisis, the effects of which could very well be felt around the world for a long time to come.

German economic growth is still well shy of, for example, the 8 percent China is already reporting. Nevertheless, the latest statistics from Wiesbaden are part of a wave of positive news that has market players and politicians breathing a sigh of relief.

The Ifo Business Climate Index for industry and trade, for example, has been rising for months. Such barometers of the general mood provide an indication of companies' and consumers' expectations for economic development in the coming months.

Even more important is the fact that production volume in German industry increased by 4 percent in June compared with May. The total number of orders is also rising once again, by leaps and bounds in some cases. In June, exports were up a surprising 7 percent.

But the German economy is also faced with its share of contradictions, with industry insiders admitting that companies are cutting jobs at the highest rate since 2002. Nevertheless, the overwhelmingly positive data have even prompted skeptics to concede that the recession may have come to an end.

"There are in fact a number of signs of stabilization at the moment," says Jürgen Stark, chief economist at the European Central Bank. According to Stark, these assessments are no longer based solely on polls, "but are increasingly being confirmed by actual economic data."

The upturn is attributable to the proactive efforts of national governments to combat the crisis. The German government, for example, has introduced two economic stimulus programs, and the measures are beginning to work. Other factors contributing to the upturn include the central banks' low interest rates and current price trends. Many products, most notably gasoline and food, are significantly cheaper than in 2008. This increases buying power and stimulates consumption, at least in Germany.

Last week German statisticians confirmed the first annual decline in consumer prices in the country for more than 22 years, with the country's Federal Statistics Office releasing figures showing that consumer prices had dropped 0.5 percent in July compared to the same month last year. This acts as an additional stimulus program, because it reduces costs for consumers by billions of euros.

Fears of the W

But what comes next? Is the cautious growth in the second quarter merely a temporary blip or the beginning of a real turnaround? Economists are applying several different theories in an attempt to predict the future.

The majority of economists long believed that the current recession could be characterized by an L-shaped curve: a rapid drop, followed a prolonged period of virtually no growth. The advocates of the L-shaped recession theory are currently on the wane, while a V-shaped curve seems increasingly likely: a rapid drop, followed by a speedy recovery. Others believe a slower, U-shaped recovery is more realistic.

One of the optimists is Michael Heise, the chief economist of German insurance giant Allianz, who predicts that growth rates of 2 to 3 percent next year are within the realm of possibility.

But a large number of economists fear that the current downturn may turn out to be a W-shaped recession: a brief recovery followed by another collapse.

The W-shaped scenario cannot be ruled out, says IMK economist Gustav Horn. "The worst is over, but not on the job market," he says, arguing that unemployment always lags a few months behind the actual economic trend.

This is also the reason why not all experts are convinced that the economy is in fact turning around. "Current developments in the labor market have real potential for causing a setback," says Kai Carstensen, who is head of the economic trends department at the Munich-based Ifo Institute for Economic Research. According to Carstensen, consumption will suffer if a significant number of people become unemployed soon, after the end of Germany's short-time work program, whereby employees work shorter hours and the state makes up part of their lost income. This, in turn, could quickly put an end to tentative growth.

Other problems could arise when economic stimulus programs, such as Germany's scrapping bonus for cars, expire. Besides, not all risks in the financial sector have been warded off, and new problems in the banking sector cannot be ruled out.

All caveats aside, Ifo economist Kai Carstensen still expects growth to accelerate in the third quarter. He predicts it could exceed 0.5 percent. Some analysts are already correcting their initial forecasts, although the changes remain cosmetic at best.

Carstensen estimates that the German economy will shrink by about 5.5 percent for the year as a whole, and not 6 percent, as originally predicted. Joachim Scheide of the Kiel Institute for the World Economy (IfW) agrees with Carstensen's assessment. Both economists also expect the German economy to continue growing in 2010, though not with any significant force. Scheide expects that "we will spend the entire year hovering just above the zero line."

'The Worst May Be Behind Us'

In the United States, on the other hand, the mood is becoming decidedly buoyant. The US economy is expected to grow at an annualized rate of 2.4 percent in the third quarter. Three-quarters of the 50 economists surveyed by the Wall Street Journal last week are convinced that the recession will end in the United States before the summer is out -- or that it could already be history.

Like Chancellor Merkel, US President Barack Obama's official take on the positive economic news has been cautious. "The worst may be behind us," Obama said. Nevertheless, the administration in Washington is already taking the credit for the change in the overall mood. "The fingerprints of the (Obama administration's) Recovery Act are all over this data," said Jared Bernstein, Vice President Joe Biden's chief economist.

The talk these days in the United States is less about if the recession is over than why it is over. "What if in the end they got it right?" the New York Times asked, referring to the US administration's economic experts such as Treasury Secretary Timothy Geithner and White House economic adviser Larry Summers, who have been accused in recent months of serious errors in judgment.

Even critical observers like Nobel laureate Paul Krugman, and pessimists like economist Nouriel Roubini, one of the few to have predicted the crisis in all its fury, now support the government's efforts to combat the recession.

They argue that Ben Bernanke, the chairman of the US Federal Reserve, should be reappointed, because, as Roubini wrote in the New York Times, he "averted the L-shaped near-depression that seemed highly likely."

Harvard economist Kenneth Rogoff agrees. "The Obama administration did a great job taking the risk of a new Great Depression off the table," he says. However, Rogoff argues, this doesn't necessarily mean that a strong recovery is on the way. "This wasn't a normal recession, but an epic event," he says. Rogoff believes that growth is unlikely to top 2 percent in the coming years. The US economy, according to Rogoff, "had a heart attack, and it's going to be in recuperation for a long time."

Caution is indeed indicated, particularly with unemployment levels expected to remain high in the United States for some time. Experts estimate that the unemployment rate will not consistently fall below 7 percent until 2012. The Fed even expects unemployment to rise above 10 percent. As a result, very few experts expect a fast, sustained economic recovery, and they believe that growth will remain at only about 2 or 3 percent in 2010, although it could very well rise sharply after that, in their opinion.

A small but vocal minority of economists is not even convinced that will happen. They fear that Americans will fare the way they did in the early 1980s, when a sharper than expected upturn was followed by yet another downturn. US economists refer to the phenomenon of the W-shaped curve as a "double-dip" recession.

The possibility of that happening certainly exists. High unemployment will continue to curb American consumer spending, which accounts for 70 percent of economic output. Retail sales declined by another percentage point last month, despite the billions the US government is spending on its "cash for clunkers" program, modeled on Germany's scrapping bonus for cars.

Consumer debt also remains high among Americans. Many homeowners owe more on their mortgages than their houses are worth. And it is by no means clear just how stable the situation is among banks, whose balance sheets are still burdened with hundreds of billions of dollars in subprime mortgages and other toxic securities.

Pessimists, almost taking perverse pleasure in the direness of the situation, are pointing out supposed parallels to the world economic crisis of the early 1930s. Then, newspapers, experts and government agencies repeatedly declared the crisis to be over, only to see the economy slump again shortly afterwards.

Such cautionary tales have kept Chancellor Merkel from using overly optimistic language. Late last week, she praised what she called "tiny green shoots of hope" -- as if she were personally responsible for protecting them from harm. 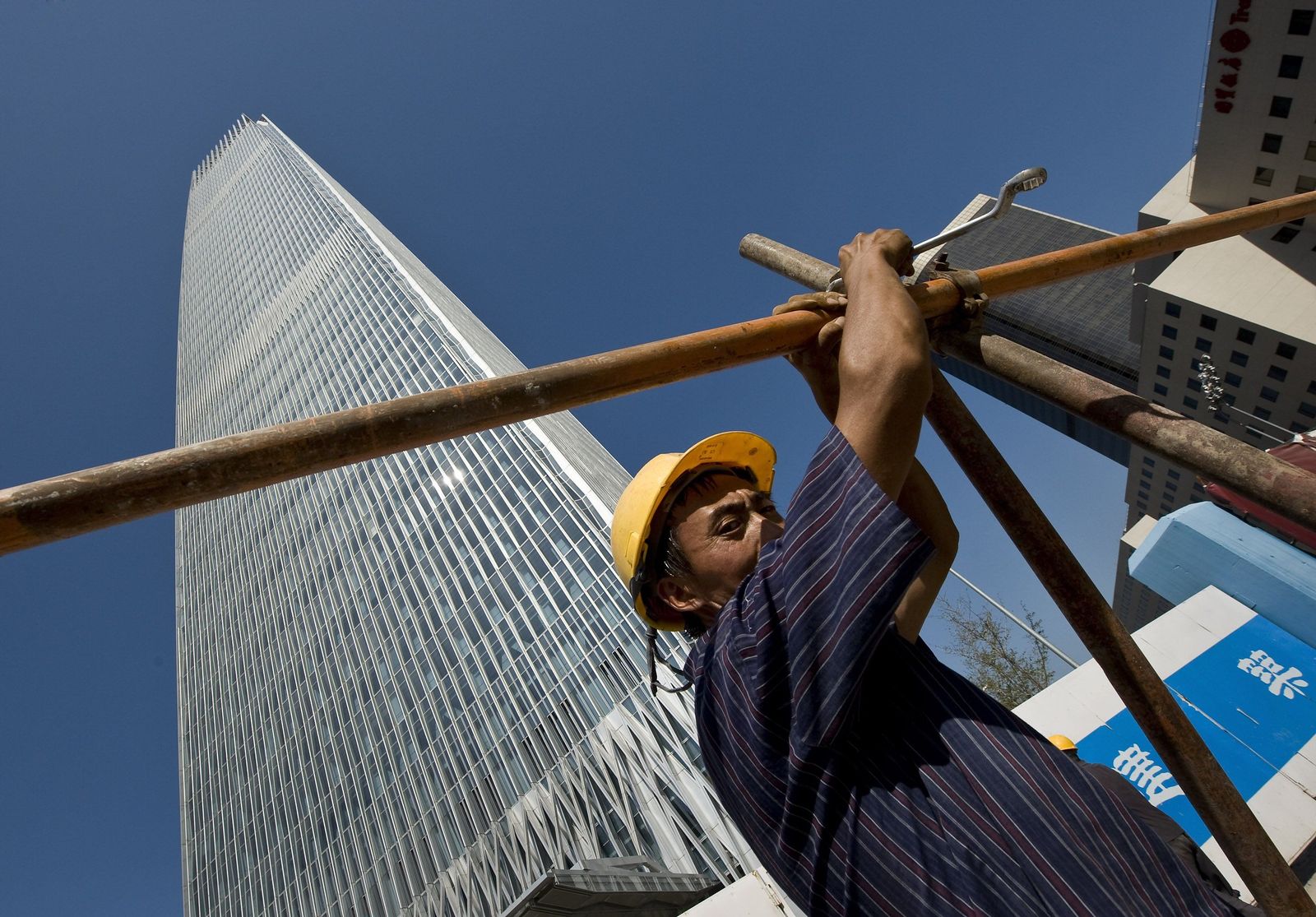 A migrant worker assembles scaffolding in front of the new China World Tower in Beijing.