The feeling of déjà vu was difficult to ignore. Immediately following the recently ended climate conference in Doha, German Environment Minister Peter Altmaier insisted that the gathering had "opened the door to the future of international climate protection."

It was a comment reminiscent of so many attempts by top politicians in recent years to sell yet another failed climate summit as a success. This year, the summit barely avoided collapse by forging a last-minute agreement that the 2015 meeting would be the one at which a global emissions reduction deal would be decided. That such a deal was supposed to be produced at the 2009 summit in Copenhagen seems to have been largely forgotten.

Even the definition of success has been dramatically diminished. The conference, said Hans-Joachim Schellnhuber, the long-serving climate advisor to the government in Berlin, can be "counted as a success because a collapse of the arduous United Nations process was avoided."

Top climate researchers have had enough, though. Several leading experts at internationally renowned institutes in Germany are demanding an end to the climate summit charade. It is time to begin confronting the reality of a warmer future rather than meekly insisting that global warming can be slowed without taking action to make that happen, they say.

'Dream of a Deal Is Over'

The period characterized by "the UN's clever management of expectations" is coming to an end, says Oliver Geden, a climate expert with the German Institute for International and Security Affairs in Berlin. "The expectation that the worsening problem would put pressure on the international community to find a solution has not been borne out -- and isn't likely to be."

"The dream of a global deal is over," agrees Frank Uekötter, an environmental historian at the Rachel Carson Center for Environment and Society. "An elimination (of the summit regime) would create space for new momentum."

For many, such statements border on sacrilege, though. Environmentalists have had huge expectations of the UN climate negotiation process, believing for years that it would ultimately result in a global deal for the reduction of greenhouse gas emissions. It was, in short, to produce the holy grail of a more rigorous successor to the weak, largely non-binding Kyoto Protocol -- one that would limit global warming to 2 degrees Celsius (3.6 degrees Fahrenheit).

Instead, the process, culminating annually in highly publicized summits that invariably end in disappointment, has only managed to produce a series of agreements to reach an agreement. "I have never understood how negotiations that don't even work among 20 countries are supposed to work in the UN model with 194 countries participating," Geden says. "The US and China aren't going to be told what to do by Nauru or Tuvalu." He adds that it would likely be more productive if leaders negotiated in smaller groups.

Geden and Uekötter are joined in their skepticism by a number of respected academics and climate experts in Germany. Maximilian Mayer, a political scientist at the University of Bonn, says that the UN climate negotiations are at risk of becoming "a form of technocracy controlled by experts," and proposes a "significant slowdown in the UN climate process."

Silke Beck, a climate expert at the Helmholtz Center for Environmental Research, blasts the summits for being little more than "symbolism" and says that the issue of global warming is "several sizes too big" for the UN process as it is now pursued. Hans von Storch from the Institute for Coastal Research at the Helmholtz Center adds that the process has transformed researchers into little more than "ushers in the political theater."

But what can be done? The answer given by many is a surprising one. The goal of limiting global warming to just 2 degrees Celsius has become much too central, they say, because it guarantees that the focus of the public debate remains almost exclusively on the reduction of carbon dioxide emissions. Yet after two decades of failed negotiations, the 2 degree goal has likely already become unattainable. It's time to broaden the focus, they say.

"The current discussion is much too fixated on greenhouse gases," says Uekötter. He refers to the recent climate conference failures as the "phase of inaction."

Instead, many say that measures aimed at dealing with the inevitable consequences of climate change must become central. That would involve including local initiatives in the broader UN approach rather than just focusing on average global temperature. Germany, for example, has moved ahead with a multi-billion euro plan to protect its coasts from rising sea levels and worsening storm surges. But such issues are left largely unaddressed at UN climate conferences.

"The situation is absurd," says Sebastian Wiesnet of the University of Bamberg. "It would be more forthright, with respect to voters, to step back and think about how global climate protection could really be implemented." Efforts to actually prepare for the effects of climate change, he says, could not only be implemented more quickly, but they would also be cheaper than emissions reduction efforts.

Furthermore, the effects of the changing climate are different from place to place and are often magnified by local realities. When it comes to dangerous storm surges threatening islands in the South Pacific, for example, the UN climate conference tends to focus exclusively on rising sea levels. But the problem is often magnified, for example, by the destruction of coral reefs by fishermen. "At the local level, other, more rapidly changing conditions are often more consequential than climate change," says political scientist Mayer.

Any sort of move away from the 2 degree Celsius target, of course, would be politically risky. To many, it would sound like an abdication and a retreat from decades of pledges to finally launch a global effort to combat global warming. But researchers are beginning to come to the conclusion that there might be no other way.

Today's computer-simulated climate models, the foundation of all UN climate negotiations, represent the "almost complete disregard for reality," says Werner Krauss, from the Helmholtz Geesthacht Center for Materials and Coastal Research. "A world is being saved that only exists as a model." 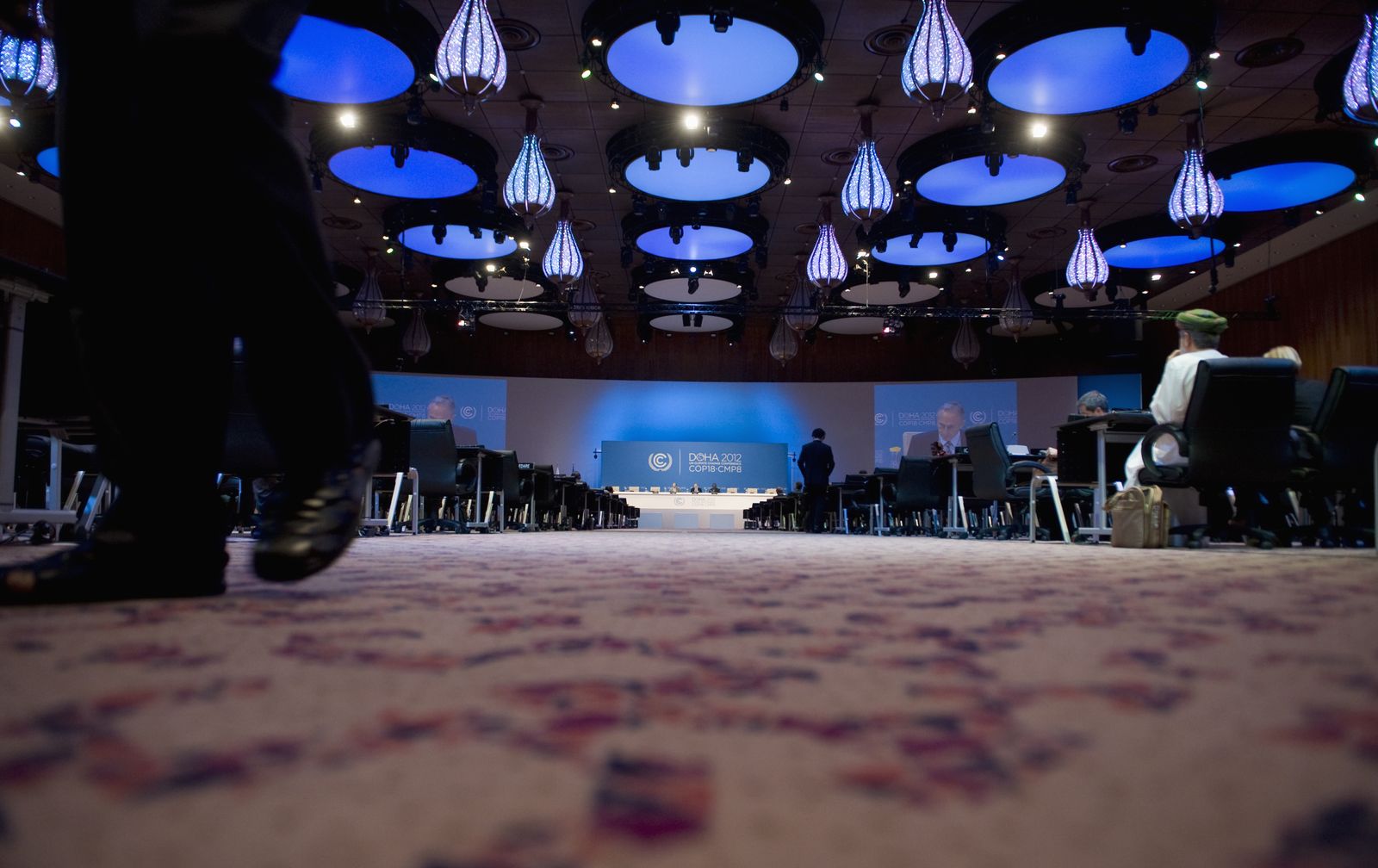 The United Nations climate summit in Doha didn't live up to expectations.