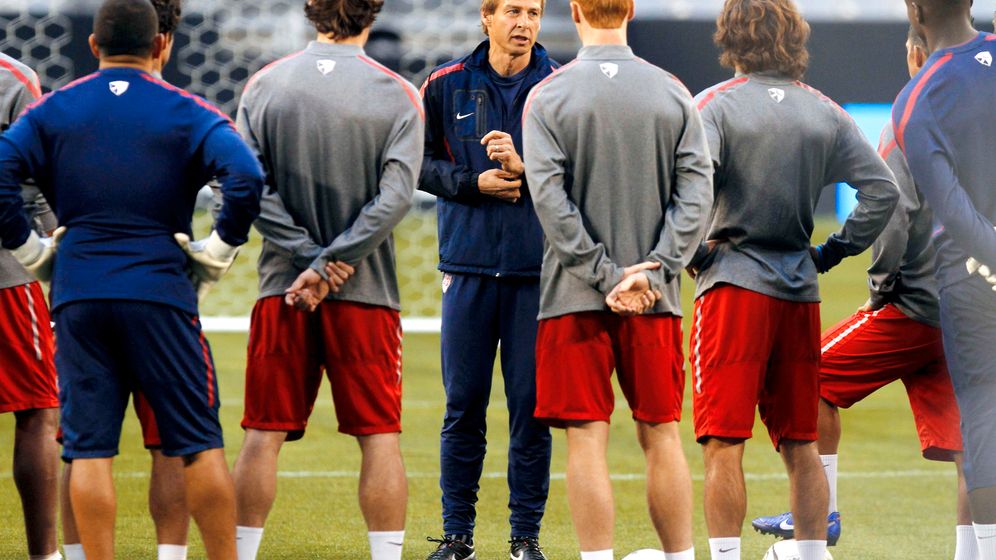 He could easily lean back in his seat, relax and let the film speak for itself. It is a documentary about the Panama Canal, its history and construction -- a project the Americans completed after the French had given up. It is a hymn to America, his country. But Jürgen Klinsmann, the new coach of the US national soccer team, is sitting bolt upright in his seat. When the lights go on and the question-and-answer session begins, he immediately asks the first question.

"How many ships pass through the Panama Canal every day?" Klinsmann wants to know. He is sitting in the front row of the theater at the Centro de Visitantes de Miraflores, the visitors' center for the Panama Canal, while his players lounge in the seats behind him. When he was standing on the visitors' deck before the film, Klinsmann documented everything on his iPhone. He was surrounded by tourists, none of whom knew who he was. Together, they were watching the locks as a container ship was being tugged through them. Klinsmann was constantly searching for the best angles for his photos, while his players took pictures of each other. Sometimes this meant standing on tiptoe and stretching his arms high above everyone else.

His curiosity is said to be infectious. It's one of the reasons he asks the question about the canal. He's sending a message to his players, hoping that they will follow his lead and ask their own questions.

It's the day before the team's friendly match against Panama. Klinsmann already has eight matches under his belt, since he signed his contract as the US national team's coach last July. So far his results have been mixed: three wins, one draw and four defeats.

But the purpose of trips like this one is to teach his team that success is about more than the latest scores. Klinsmann takes his team on outings whenever they are traveling. They've been to Ground Zero in New York and to the Palace of Versailles outside Paris, all part of Klinsmann's plan to teach them about something other than soccer, and to have them experience places beyond the borders of their own country. He has also sent the U-19 team to the Mercedes-Benz Museum in Stuttgart. He wants to take his players out of their comfort zone, as he puts it.

Klinsmann tried a lot of different things in his first few weeks on the job. He eliminated the privilege of permanent jersey numbers, and he introduced more training days and a more rigorous physical fitness program.

He sent US national players to train as guests with European clubs, like the German clubs 1. FC Kaiserslautern and VfB Stuttgart, so that they would learn something new. He also replaced some full-blooded American members of the team with players who had grown up overseas and have dual citizenship, like Fabian Johnson, born in Munich, and Daniel Williams, born in the southwestern German city of Karlsruhe. Both play for the German club TSG Hoffenheim.

Seven players on the national team are now from Germany, which prompted a reporter with The New York Times to invent a new category of players he called "Germamericans."

'Totally Cool With Me'

Klinsmann is sitting at the pool at his hotel in Panama City. Three American journalists who write for news websites have come to interview him. There is no camera team, and there are no photographers. The tone of the conversation is polite and respectful. The journalists don't address him as Mr. Klinsmann, and certainly not as Jürgen, but simply as "Coach."

Klinsmann was criticized in the media over the weekend, because he had named Jermaine Jones, who plays for Germany's Schalke 04 club, captain of the national team. Jones was suspended from playing in the German national league, the Bundesliga, because he had deliberately stepped on the broken toe of another player, Marco Reus of Borussia Mönchengladbach. And this is the sort of man who is supposed to lead the US team, critics asked? The website socceramerica.com called it a "dark day in US men's national team history," and said that it "sends an alarming message of what (Klinsmann) thinks about American talent."

And what does the coach think?

It is, says Klinsmann, "totally cool with me."

He flashes the smile that used to drive his critics in Germany crazy, because they suspected that he was simply smiling away problems. But in the US, anger about such things isn't lasting. There is no press mob that can spend days working itself up over soccer. There are no retired soccer greats like Uli Hoeness and Franz Beckenbauer to feed the tabloids. Klinsmann can even afford to tell a joke.

"Jermaine is a player that is highly aggressive and is always a bit … on the edge," he says. "If you play that kind of a game and you know that if you step over it, which he did -- not stepped over it. He stepped on it. Ha ha ha."

Klinsmann has found his dream job in the United States. The American national team is a perfect test laboratory. For Klinsmann, everything in America is different from the way it was in Germany. When he was the coach of the German national team, he had to spend two weeks dealing with an out-of-control debate over his use of rubber exercise bands in training. And it's also different from his stint as coach at Bayern Munich, where he was let go after 10 months because the team's chances of qualifying for the Champions League were in jeopardy.

"They always want to have an objective in Germany," says Klinsmann, "and you end up at a dead end as a result. When something isn't working, you sometimes have to keep on pressing ahead, and after two years you do end up winning the Champions League after all. In America, people are willing to be more patient."

When it comes to soccer, the United States is considered a developing country. Conditions there are "like in the Wild West," says Klinsmann. College soccer has been separate from professional soccer and the US Soccer Federation for years. A soccer academy has only been promoting new talent for the last four years. Everything is proceeding very slowly. But this is precisely what provides Klinsmann the opportunity to make a big splash as a reformer.

He wants to build a team that corresponds to his image of America: an open-minded, multicultural country. He wants it to be a team that also reflects his own story, namely that of a soccer player who played in Stuttgart, Milan, Monaco, Munich and London, and who speaks English, French and Italian in addition to his native German.

Klinsmann believes that the American national soccer team should be more American than every baseball team, in which most of the players are white. "In America, no one is completely American," says Klinsmann. "Everyone somehow has ancestors in Europe, in Africa or in South America. A national team always represents a little bit of the character of a country."

A Lot of Work to Do

He sounds a little like President Barack Obama, who promised to unite the United States, including its political adversaries, races and cultures. Obama also said that America has to learn from others -- a remark his political rivals used as an excuse to call him a traitor.

Klinsmann knows that his new freedom has a lot to do with the relative unimportance of soccer in America. There are Americans who say that soccer isn't a sport for men, but for girls and pansies who don't have what it takes to play American football. In this sense, America isn't too weak for soccer; rather, soccer is too weak for America. These attitudes have helped American soccer, especially the national team, carve out a comfortable niche for itself. The team has never been under the unconditional pressure to win. "In this sense, the environment is different in the United States," says Klinsmann. "If you lose a match here, nobody cares. Then people say: 'Oh, you lost yesterday. No problem.'"

Klinsmann sees his biggest challenge in awakening a competitive spirit. He wants to challenge the biggest teams -- Italy, Spain, Brazil, Germany -- even if it's bad for his record as coach. "But I'm always telling the guys: Just imagine what'll happen if we turn the statistics around one of these days," he says.

He needs a lot of optimism to maintain such hopes. Klinsmann's advisor, Roland Eitel, says that if players from the United States were ever hired to play for clubs like Everton or Hannover 96, they would think to themselves: "Wow, we've really made it." But then, says Eitel, Jürgen tells them Everton isn't the future, nor is Hanover, but that the future is Liverpool and German powerhouse FC Bayern.

Now Klinsmann's biggest objective will be to qualify for the 2014 World Cup in Brazil. The first elimination matches are scheduled for this summer. He recently said that he hopes to discover America's Messi. It made some players on his team cringe, because they feared that the expectations were getting too high. And yet the things that count for Klinsmann's team are still relatively minor, like its recent 1:0 win over Venezuela or the friendly match against Panama, a country with less than half as many people as New York City.

On the day after the visit to the Panama Canal, Klinsmann is sitting in the catacombs of the Estadio Rommel Fernández in Panama City, giving a press conference. His team won the match 1:0, despite a red card and the obvious weaknesses of the team, which threatened to run out of steam near the end of the match. The team's head of security is sitting next to him and pluckily translating Klinsmann's sentences from English into Spanish. Klinsmann is pleased with the successful match, but he also hints that there is still a lot of work to do.

Then he gets up to drive back to the hotel where the team is staying. Before he leaves the room, Klinsmann slaps the security man on the shoulder and gives him the biggest compliment he has handed out this evening.