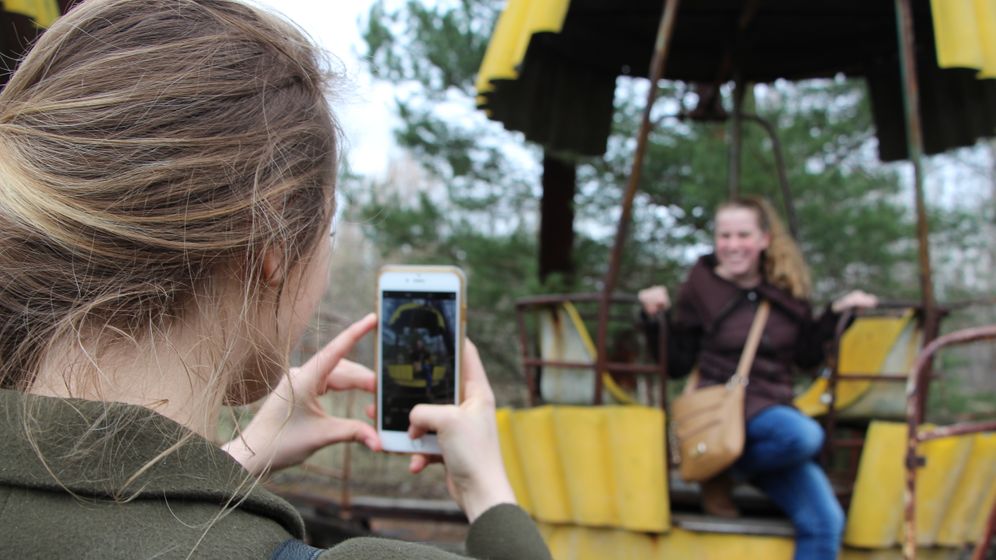 Footsteps crunch across shards of glass and cameras chirp as a group of visitors pushes its way through an evacuated school inside the Chernobyl exclusion zone. Yellowed school books still sit on the desks, Soviet propaganda hangs on the walls and there are several gas masks dangling about. Mobile phone screens glow in the half-light. Time is kept by the ticking of Geiger counters, the hideous heartbeat of gamma rays.

"It's quite morbid here," says Alex, from Munich. The well-dressed 20-something takes a few selfies, smiling coolly in front of the backdrop of ruins. "I like offbeat experiences," he says. Alex works for an online portal and enjoys traveling to exotic places: to the Nyiragongo volcano in Congo, for example, or to the mountain gorillas in Rwanda. He has also taken a weightless flight with an Airbus and joined a tour through North Korea.

Alex is in Chernobyl with a few friends from school and, as a specialist in strange destinations, the trip was his idea. Chernobyl is a powerful brand name: It has become a post-apocalyptical product, simple to consume.

On April 26, 1986, Chernobyl's reactor Nr. 4 exploded, quickly becoming the most devastating nuclear accident in history. Many of the images stemming from that day have become iconic: the destroyed reactor, little more than a smoking hole after the blast; the convoys that evacuated more than 200,000 people from the danger zone; the wolves, European bison and wild horses that roam freely through the abandoned villages 30 years after the disaster; older residents who refused to leave, living off of half-legal, irradiated potatoes, even though the entire area within a 30 kilometer (19 mile) radius of the nuclear reactor is officially off-limits.

"Hi, my name is Alexei and I'm your DJ for the day," Alexander Rybak says into his microphone. He's a tour guide, but prefers to be referred to as an "Explorer." "Congratulations, you will be visiting the craziest place on earth today!" Everyone on the bus laughs. They have all paid more than $100 in Kiev for the visit to Chernobyl, located about 115 kilometers (80 miles) north of the Ukrainian capital. Dark humor will be the order of the day and becomes something of a lingua franca among the Ukrainians, Germans, Argentinians and Americans on the tour.

After a two-hour drive, the bus passes the checkpoint at the entrance to the exclusion zone. Soldiers examine the travel documents of the tourists behind signs warning of elevated radiation. Chernobyl is widely viewed as a post-apocalyptic place, synonymous with death by radiation. It would be hard for a place to have a worse reputation. Which helps explain why tourism is booming here: In 2015, the administrators of the Chernobyl exclusion zone registered 16,386 visitors from 84 countries.

"There isn't just one Chernobyl," says Alexei, the Explorer. "Everyone sees what he wants to see." He has accompanied fully 500 tour groups to the zone and says that many were quiet and awed while others pounded vodka and turned it into a party. As a child, he and his family were resettled out of the zone and he went on to study English and literature. His favorite book about Chernobyl? "I don't need any books about the zone," he says. "It's part of my family history."

Alexei wears a mischievous smile and a paramilitary-esque uniform. Behind him, a hundred-meter high antenna stretches into the sky. The Soviet army used the facility as part of an early-warning system to detect missile launches in the US. On maps, the military base was labeled "former pioneer camp" in an effort to keep it secret.

Our next stop is the exploded reactor, huge, threatening and sheathed in concrete, the so-called sarcophagus. The radiation dosage here is over 3 micro-sieverts per hour, about 20 times the normal contamination one is exposed to in a big city. On the other hand, though, it is much less than the radiation dosage one receives during a trans-Atlantic flight -- at last according to a brochure passed out in the bus.

"Unfortunately, Ukrainians only think about Chernobyl once a year -- on the anniversary," says Yuri Urbanksi. He was a teenager when the disaster struck, and his parents sent him off to a summer camp for six weeks, which he loved. Today, he is celebrating his 43rd birthday with the trip to the exclusion zone.

Tourists from around the world are gathered in front of the sarcophagus, and they seem like exhilarated children on a field trip. It's not every day, after all, that you can take selfies in a disaster area.

Because the old sarcophagus has begun crumbling, a gigantic new protective shell is being built 300 meters away. It is to weigh over 35 million kilograms, will last for 100 years and will cost over 2 billion. For research, though, there is often a shortage of funding. One UN group complains, for example, that the medical files of the emergency personnel who responded to the disaster in 1986 are "presented in different formats, using different diagnostic criteria and time periods," which makes it difficult to examine them. Even well-known radiobiologists have found it difficult to obtain sufficient funding for studies aimed at looking at the effects of chronic radiation exposure on animals and plants in the exclusion zone.

Questions about how great the damage has been and what Chernobyl has taught us are controversial and politically contentious. It has become a vacuum of knowledge, allowing everybody to see what they want.

Another tour a few days later visits a different attraction inside the zone: an abandoned hospital. "Okay, everyone get out, you have half an hour," says Sergey Teslenko, the good humored guide in his mid-20s. "And watch out for the zombies!" Teslenko is fond of zombie jokes, a reference to films like "Chernobyl Diaries," which used the exclusion zone as a backdrop for horror. Many visitors are also familiar with Chernobyl from video games such as "S.T.A.L.K.E.R," "Call of Duty 4" and "Fallout."

Those hoping for an informative museum or even just a book shop at the site are destined for disappointment. A restaurant in the town of Chernobyl only has T-shirts and postcards on offer. Everything else is up to the visitors: There is a paucity of information.

For tour operators, Chernobyl tourism is lucrative. With the national currency, the hryvnia, being heavily devalued due to political instability in the country, many people hardly earn more in a month than a single tour costs. On websites like Chernobylstore.com, travelers can book group tours or individual adventures. A visit to one of the quasi-legal residents inside the zone can be had for a surcharge of 17.70 on top of the day rate. If you want to fly a documentary drone, licenses cost a hefty 206.20.

For visitors, the disaster is made consumable. A documentary film is shown during the bus ride from Kiev, followed by a few music videos. One of them is by the band Crucifix, filmed among the ghostly ruins.

The tour group traipses joyfully through the abandoned ruins of the evacuated hospital, taking pictures of the dusty beds before continuing the journey onward to Pripyat, the deserted city located just two kilometers from the destroyed reactor.

"The atom is a worker, not a soldier!" This propaganda slogan praising the civilian application of nuclear energy is displayed high up on a crumbling concrete-block building on Lenin Square. Pripyat was built in 1970 as an ideal socialist city for the 50,000 workers employed at the Chernobyl nuclear plant. It was considered a privilege to live close to the reactors and the residents were promised a radiant future. That future turned out differently than planned. The amusement park in Pripyat, which had been scheduled to open on May 1, 1986, was never used.

There are plenty of dangers still lurking in the region. A couple of steps further and the Geiger counter sounds the alarm. Green is the color of warning: the ground, moss, grass and leaves are often more contaminated than anything else. The clicking of the radiation gauge triggers all kinds of morbid thoughts. What was it like to live here -- and to die here? You could call it the Pompeii Effect, the feelings of mortality one gets in places where life suddenly ended in the wake of an enormous tragedy.

Alexei was right: Everyone sees what they want here.

"Whoa! I just had 3 millisieverts per hour over there! Awesome," says one visitor pointing to his Geiger counter. "And I had 10 once this morning," his buddy answers. Both are wearing simple masks to protect against dust.

Radiation in the region

"Could you please move out of the picture?" a visitor asks. She's looking to take an atmospheric picture of a decrepit swimming pool for her Facebook page. Photos from the exclusion zone almost always make it look like there isn't a person around for miles, even as they are taken from within a crowd. Common images include dusty puppets, torn school books and piles of gas masks.

"I would like a ticket please," jokes Katie Woginric, a young American standing at the rusty ticket stand at the Ferris wheel that was never used. One of her traveling partners stands behind the window and hands her an imaginary ticket. She then looks theatrically at the sky as though she were seeing a cloud of poison. Damn! A tourist films the show with his mobile phone.

Is such a thing silly and disrespectful? Her family is originally from Ukraine, Katie explains; she is called Ekaterina at home. She is currently working as a teacher in Normandy, but she got homesick, which is why she took a trip to Ukraine. When she was a child, her father told her about the Chernobyl tragedy -- about the heroic courage of the workers and the pain of the families that once lived here. For Katie, the crumbling ruins are a piece of home.

When she emailed the small video back to her family at home, she got a strong response. "My friends thought it was extremely cool that I was there, my grandparents thought it was crazy and stupid, but my dad especially loved it," she says. In it, Katie poses in a cracked, yellow plastic Ferris wheel seat in what is perhaps the saddest amusement park in the world. She is smiling.

Perhaps the flood of such strident images in the internet could become a jumping-off point for transforming the Chernobyl adventure-playground into a place of learning, though a physical museum isn't strictly necessary. Maybe by the time the next anniversary rolls around there will be an intelligent virtual-reality environment or even just a simple app, offering context, facts and background.

But it's time to head back through the two checkpoints and take final photos at the radiation detector. To leave the zone, visitors must be checked for contamination.

"I hope we'll see each other again soon," says a grinning Sergei in farewell. "We await you after the next disaster in Ukraine!" 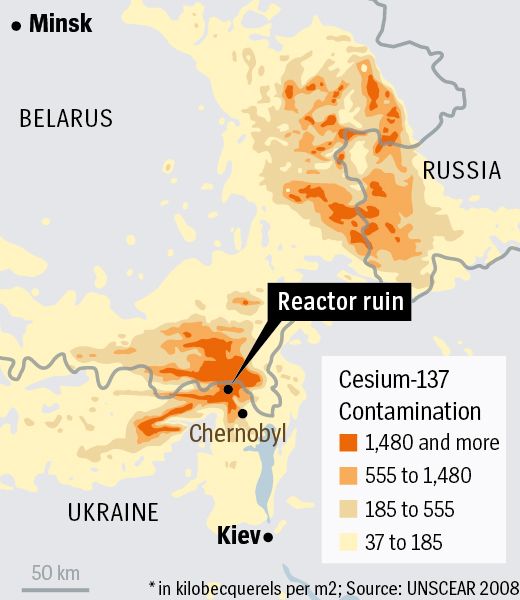 Radiation in the region