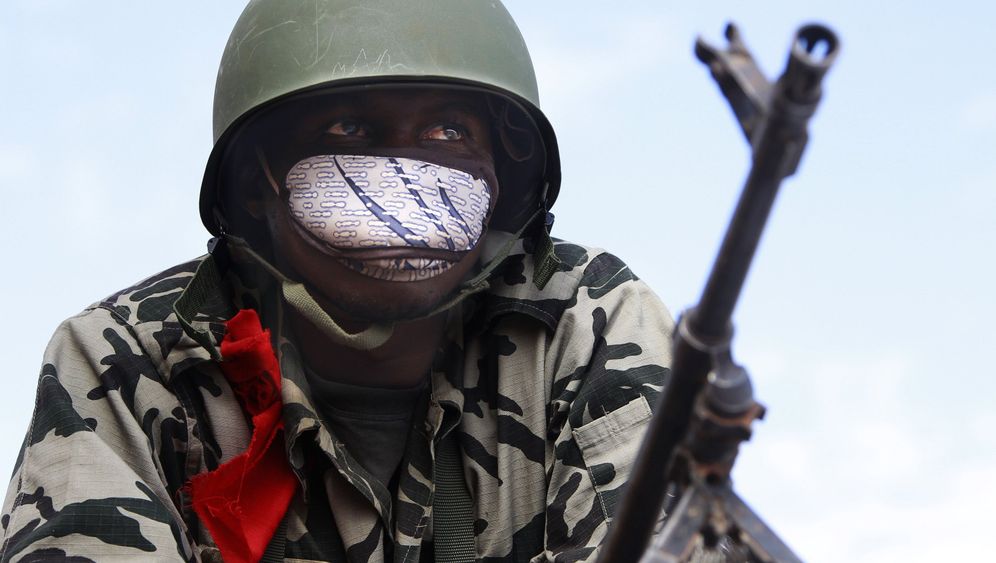 Photo Gallery: Konna in the Crossfire

Despite the chaos that swept his hometown in recent weeks, 34-year-old Mohammadou Traore has not lost his sense of humor. It's Sunday afternoon and he's stretched out, exhausted, on a rickety plastic chair outside his small store in the center of Konna in central Mali. Just 10 meters away, a burnt-out pick-up truck that belonged to Islamist fighters from northern Mali is a reminder of the violent clashes that took place in the town earlier this month. But Traore grins when he says that for him personally, the fighting was good for business. "On Thursday morning, the Islamists bought six kilos of dates at my store, then the French troops came in the evening and paid me €20 for the last crate of water I was keeping in the refrigerator."

That Thursday, Konna was on the front line of the French intervention against Islamists in Mali. For months, the north of the country has been occupied by fundamentalist Islamist rebels, made up of a loose alliance of three jihadist groups. In mid-January, 300 rebel fighters in a convoy of around 100 pick-up trucks suddenly launched a southern offensive, infiltrating the small town and ambushing Malian soldiers. Just hours later, French President François Hollande took a unilateral decision in Paris to act against the advancing rebel troops and ordered an immediate deployment of French fighter jets and helicopter-borne special forces.

The trip to Konna gives an inkling of how heavy the fighting must have been. The sides of the roads are littered with the charred remains of jeeps, many of which were fitted with machine guns. Their dismembered parts now lie strewn amid the thorny bushes of the Malian desert, like the skeletons of slain beasts of prey. The Malian soldiers, who escorted a group of reporters to Konna on Sunday, stopped and posed in their shades next to the burnt-out vehicles, choosing to forget how powerless they were against the Islamists. The rebels were pushed back only thanks to the French intervention.

'I Thought It Was All Over'

Ahmadou Gourd has little faith in the Malian army. The 35-year-old Arabic teacher looks gaunt as he stands outside his modest farmstead, watching his children play in dirty puddles while his wife cooks up some millet. "When the Islamists arrived in Konna, five government soldiers fled to my farm," he says. In a state of panic, they told him they had run out of ammunition and needed help. Gourd showed them a small dirt track that led through thick bushes and away from Konna. No sooner had the soldiers made off than four bearded men with Kalashnikovs were knocking on his door. "Fortunately I was able to get rid of them by chatting them away in Arabic," recalls Gourd. "If they had found the soldiers, I would have been shot."

Gourd is one of the few residents still out and about. With its empty dusty streets lined with crooked mud huts, Konna resembles a ghost town. Now and then a car full of people returning home drives in. "Most of my neighbors fled as soon as they heard about the Islamist advance," explains Gourd. He himself decided not to leave his house, and believes the rebels spared him only because he spoke Arabic. "I also assured them that I was a devout Muslim, and that probably placated them," he says. Soon afterwards, he heard the first bombs dropping. "I thought it was all over," he remembers. "I didn't realize it was the French."

First, Islamists swept across entire swathes of the country in their pick-up trucks. Then an air assault -- militarily superior but invisible to locals -- began dropping bombs. It was these hours spent caught in the crossfire of an unequal war that most traumatized the people of Konna.

"I still can't sleep," says Dani Diana, a mother of three. "I'm jolted awake by the slightest sound." She had a similar experience to that of her neighbor, Gourd. The Islamist rebels knocked on her door, their rifles over their shoulders, demanding she give them whatever food she had. Shortly thereafter, the French fighter aircraft began pounding the town with bombs, and a day later, special forces went from house to house, looking for Islamists who might be hiding.

The Stench of Rotting Flesh

It's only now, driving through Konna, that Ahmadou Gourd can see how heavy the bombardment was. Craters three meters deep split the ground near to the town's small port and fish factory. This is where the Islamists had set up camp, using several light-wheeled tanks confiscated from the Malian army as a protective barrier. As soon as Gourd and the reporters rumble past the premise gates in a jeep, the Malian soldiers dozing in the shade are instantly awake and blocking their route. The grounds still aren't safe, they insist, maintaining that there might still be unexploded bombs beneath the rubble. But the stench of rotting flesh suggests the soldiers' main concern is to shield the sight of dead bodies.

Gourd accepts the inevitability of lives lost. Like most people in Konna, he heard on the radio that the French had reached Timbuktu in the north of the country and that the Islamists had taken flight. By Monday morning, French military officials were saying that ground forces backed by French paratroopers and helicopters had taken control of the airport and roads leading to the desert town in an overnight operation.

"Now that France has intervened, there is hope for Mail," says Gourd. Germany, meanwhile, has pledged to support African troops fighting the insurgents with equipment such as trucks, uniforms and boots. So far, Berlin has ruled out supplying arms but has contributed two Transall transport aircraft.

The jeep drives on past the building where Konna's mayor works. The Malian flag was hoisted here again a few days ago. The colors are still bright -- after the mayor fled the rebels, he bought the flag in the nearest big town and brought it home with him when he returned to Konna.