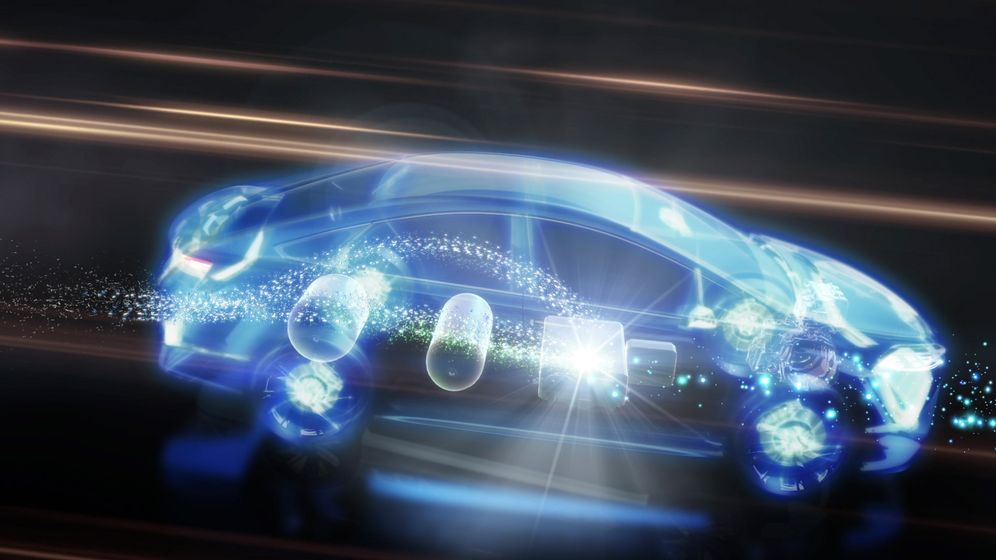 Soon there will be an electric car on the market that, believe it or not, works like a normal car. It will have a range of 600 kilometers (375 miles). Recharging it will take minutes, not hours. In fact, it won't even require an electrical outlet, because its fuel is hydrogen and it makes its own electricity. And, just as surprising, this car isn't the product of some bold startup company trying to secure venture capital -- but of the world's largest automaker.

At this year's Tokyo Motor Show in late November, Toyota will unveil a sedan that -- despite the company's traditionally mediocre design and the car's moderate total output of about 100 kilowatts -- is likely to attract attention. It will be the world's first series-produced fuel-cell car to be sold on the market. Toyota has announced that it will be available for purchase starting in 2015.

The car is powered by a fuel cell -- a sort of power plant on wheels which combines hydrogen and oxygen in a controlled manner, producing electricity in the process. Although fuel cells have been around for a long time, they lost their allure when battery technology advanced, making fuel cells, in comparison, too expensive, too complicated and too inefficient. The battery seemed to have won the race.

This makes Toyota's project both revolutionary and sobering because it marks a turn away from the purely battery-driven electric car, which is being developed by almost every other automaker in the world. And ironically, this categorical renunciation is coming from the great master of alternative engine technology.

Toyota, based in Toyota City near Nagoya, delivered the key to electrifying engines when it unveiled the first successful hybrid automobile 16 years ago. Since then, the company has sold almost six million of these vehicles, in which an electric motor supports the gasoline engine and braking energy is fed into the battery, resulting in high fuel efficiency.

It was the first time in the history of automobile manufacturing that a Japanese producer had assumed technological leadership and outpaced the rest of the industry by an entire decade. Toyota's fleet of hybrid vehicles already outperforms the European Union's 2020 emissions target, which would limit CO2 emissions to an average of 95 grams per kilometer, a target German automakers have tried to make less stringent via lobbying efforts and substantial campaign contributions to the center-right Christian Democratic Union (CDU).

Now Toyota's competitors are about to be humiliated a second time. Many viewed hybrid cars as a bridge technology to battery-based electric vehicles. But now that they have started selling electric cars, they are confronted with an unresolved problem: The cars cost too much and are inefficient. Their ranges are too small and it takes hours to recharge their batteries. Electric cars have not managed to become the standard anywhere in the world. Engineers and politicians alike are realizing that batteries will not enable our mobile society to reduce its dependency on the exploitation of fossil fuel reserves.

Koei Saga of Toyota is a short, sturdy man who speaks very openly, but preferably not in English. The 62-year-old is part of the generation of Japanese business executives who prefer using an interpreter. Saga spent about 10 years working on hybrid drives before becoming the carmaker's chief developer last year.

Saga is standing in a reception room at Toyota's administration building in Nagoya, speaking loudly and confidently. Battery development has brought Toyota to the "half-point to our target," he says, but he doubts this goal will ever be attainable. Electric cars based on today's battery technology, says Saga, are "loss makers."

Tesla, a California startup miracle that produces electric sports and luxury cars and was briefly profitable, could serve as a counter-argument to Saga's statement. "Tesla is a rare case," says Saga. "They are targeting rich people, and you have many rich people in California." The battery car could exist as a niche toy for eco-snobs, says Saga, but it isn't suitable for the masses.

Toyota does use Tesla as the supplier of a battery engine for an electric version of its RAV4 SUV, but not out of conviction -- it does so to satisfy a California quota rule requiring a certain percentage of cars to be electric. Tesla was a suitable partner for the venture, says Saga. "We don't have resources for everything," he notes.

Toyota is directing its energies elsewhere. Company officials note that about 500 Toyota engineers are working on fuel-cell technology, which, even for a major corporation, is a considerable number. This suggests the technology is Toyota's top R&D priority.

The key figures in the company's earlier advance into hybrid technology are the ones who are now pressing ahead with the project. In addition to chief developer Saga, they include nuclear physicist Katsuhiko Hirose, the descendant of a family of Samurai warriors.

Hirose, an eccentric intellectual, is sitting in a hotel lobby in Nagoya, wearing a wrinkled sports coat and a shirt open at the collar. He explains nuclear fusion with sugar cubes and the world's energy problem with charts on a scratched laptop, which he always has with him. He praises the Energiewende, Germany's shift away from nuclear energy and toward renewable energy, and wants to see Japan move in a similar direction. The island of Hokkaido has "enormous potential for wind energy," says Hirose.

One thing is clear to the decision-makers at Toyota: The environmental benefit of the fuel cell car hinges on an oversupply of green energy.

As tempting as the short refueling times and large ranges of a hydrogen fuel cell vehicle are, this energy footprint is also a substantial deterrent. To be climate-neutral, hydrogen has to be split from water using green electricity. Then it has to be transported, condensed to the enormously high pressure value of 700 bar, converted back into electricity by the fuel cell in the automobile, and then converted into motion.

The efficiency drawback of the fuel cell car, physicist Hirose explains, would be offset in the long term if other economies emulated the German Energiewende and one day had a surplus of green energy -- and therefore hydrogen.

But when would this scenario become a reality? After the Fukushima disaster, Japan's energy economy has been inundated with problems. The island nation currently generates most of its electricity with natural gas, coal and oil. In Germany, with its Energiewende, wind turbines have marred large swathes of the countryside. And yet wind energy satisfies only 8 percent of demand, and doesn't even provide a reliable base supply because it depends on the vagaries of the wind. Energy storage technologies are urgently needed so that green energy can be reliably stored in the grid, in anticipation of times when the wind isn't blowing.

According to a report by the German Federal Environmental Agency, "a realistic expansion of renewable energy to the greatest extent possible will not result, by 2030, in a significant potential for surplus electricity" from solar, wind or biomass sources that could be used for hydrogen production. "This cannot be expected to be achieved on a large scale until at least 2050." A rejection of the environmental vision of the hydrogen car couldn't be put more clearly.

This helps explain why there is so little interest in developing an infrastructure for this type of fuel. Germany has only 15 hydrogen fueling stations. And the recent announcement -- by an industry association affiliated with gas supplier Linde -- that this number will be increased to 400 stations by 2023 seems neither realistic nor environmentally desirable.

Toyota is aware of this. "We cannot solve these problems," says chief developer Saga. But, he adds, the carmaker must perform a pioneering role. According to Saga, it is Toyota's duty to offer a product that will make large-scale hydrogen production from solar electricity make sense in the first place. "Otherwise the change will never come."

There is a valuable idea in what he's saying, and it explains why the gasoline engine prevailed despite the fact that, at the time of its invention, hardly any oil had been discovered. It also explains why the electric car has been a failure. It is failing because it is an immature product, not because of a shortage of electrical outlets.

Competitors Get Into the Game

No one can predict whether the fuel cell car will ultimately be the key to our automotive future. But the competition is certainly impressed by Toyota's dedication. "I have great respect for Toyota, because they think on a long-term basis and they don't engage in technology hopping," says Herbert Kohler, head of R&D at Daimler.

The Stuttgart-based company was the first automaker to show its support for hydrogen-powered cars. Back in 1994, Daimler researchers unveiled a small truck powered by fuel cells. At the time, the fuel cells and secondary batteries took up much of the truck bed.

Daimler has since invested more than €1 billion ($1.37 billion) in fuel cell drives, has entered into an R&D alliance with Ford and Nissan to bring down costs and is preparing for possible series production of the technology. As with Toyota, Daimler's drive modules have since been reduced to such a compact size they can be housed in a standard car without impeding on the passenger or trunk space. The three companies envision a market introduction in 2017.

Also in the running are a manufacturers' alliance consisting of General Motors, Honda and South Korean automaker Hyundai. After paying little serious attention to the issue for a long time, German automotive giant Volkswagen formed an alliance with Canadian fuel cell producer Ballard this year, so as not to be caught unawares in case the technology takes off.

The big question of whether Toyota will once again outpace the competition will depend mainly on the price at which it can sell a hydrogen-powered car. Costs were the main reason behind the slow development of the fuel cell drive. The first units still contained about a pound of platinum. Now, says Daimler executive Kohler, the amount of the precious metal being used has declined to about the level of the first catalytic exhaust converters, and it will continue to decline even further. The question is: how far? Can this car end up being cheaper than a battery-powered electric car?

What Will It Cost?

Satoshi Ogiso is standing in front of a party tent on an asphalted open-air site in Tokyo. He is smiling. Ogiso, 52, is one of the hybrid developers in Saga's team and his potential successor. Japanese and American test drivers are driving prototypes of the fuel-cell car. The engines are on display inside the tent. They are small, relatively light and easy to install. No one doubts anymore that this technology works. Everyone wants to know how much the car will cost.

Ogiso cites two numbers. The price of the first series-produced fuel-cell car will range between five and 10 million yen, he says. That's about €37,000 to €74,000. The higher number would be astonishingly cheap, while €37,000 would be a sensation -- a car with a completely new drive technology for the price of a well-equipped, conventional mid-range car.

Daimler's Kohler prefers not to comment on these numbers, but he doesn't hide the fact that he's impressed. "It's certainly not a marketing gag," he says.

That much is clear.