Some cities and countries seem as if they had simply spent too much time focusing on self-destruction -- as if they had passed over the critical moments, the moments and the many years in which development and modernization would have been possible, and as if it were now too late.

How can anyone even govern Cairo today? Or Egypt, for that matter?

Decades of dictatorship, and years of conflict and terror, have brought suffering and neglect to the Egyptian capital and a country of roughly 90 million people. Children are going hungry instead of going to school, women are dying of diabetes because no one has told them that a doctor can make them better, and men loiter in dusty streets, not knowing where to even look for work anymore.

Cairo is a seemingly lost city, a place as desolate and unforgiving as Lagos or Calcutta. And although Egypt itself used to be a relatively secular country of tourism, it has been transformed by Islamists. Will it be possible for it to pull itself together again?

Four years have passed since the revolution, and yet the country is still in turmoil, as became evident on Jan. 25, the anniversary of the revolution. Tahrir Square, where millions of Egyptians had demonstrated for freedom and democracy, has been sealed off. Shaima al-Sabbagh, the 34-year-old mother of a five-year-old boy, lost her life when she and a small group of members of her party, the Socialist Popular Alliance, attempted to enter the square. Sabbagh fell to the ground, presumably after being shot to death by security forces.

"How can we expect elections to be conducted fairly," says liberal politician Hala Shukrallah of the Constitution Party, "if they are organized by the same interior minister responsible for the deaths of our children?" In this "climate of fear," she says, participating in the parliamentary elections set for March and April is, at any rate, "difficult."

Sisi hopes that the election will bring recognition by the international community. If the parliamentary elections aren't at least relatively clean, then it is hardly likely that leaders like German Chancellor Angela Merkel will receive him. But a visit to Berlin would constitute precisely the kind of recognition the Egyptian needs.

Little is known about Sisi, the man who rose to prominence from the shadowy realm of the military. In the so-called presidential election campaign, he portrayed himself on government television as a patient and warm-hearted man. He lowered his gaze when he talked about his childhood in Gamaliya, one of Cairo's oldest neighborhoods. He called himself a "devout Muslim," but one who had grown up surrounded by the openness of other cultures. His parents' house was near the "Jews' Alley," he explained, and he could still hear the sound of church bells ringing for mass on Sunday.

Like so many Egyptians from poorer classes, Sisi tried to acquire prosperity and respect through a military career. With close to half a million soldiers, the Egyptian army is not only the largest military force in the Arab world, but it is also an economic force. Cairo supermarkets and country grocery stores alike carry products made by the "Armed Forces." The army is the country's largest manufacturer of consumer goods, and it is involved in virtually every sector. Some experts estimate that the army, with assets of more than $100 billion (€87 billion), keeps half the economy afloat, and they view the defense minister as more of a CEO of an Egypt, Inc. than a master of war and peace.

In uniform, Sisi quickly worked his way up through the ranks. He left the military academy in 1977, two years after Israel and Egypt had signed a peace treaty. He was sent to Great Britain for training in 1992 and to the United States in 2005. He completed a degree in Strategic Studies at the US War College in Pennsylvania in 2006. He had a reputation for being a hard worker, a 52-year-old student who took his responsibilities seriously, even though his master's thesis was only 11 pages long.

After a stint as military attaché at the Egyptian Embassy in Saudi Arabia and after commanding various infantry units, Sisi was promoted to commander of the northern army district in 2008. His office was in Alexandria, where the revolution against then President Hosni Mubarak began two years later. The violent death of blogger Khalid Mohammed Sa'id triggered mass protests in the port city, which later spread to Tahrir Square in Cairo.

Shortly after Mubarak was overthrown, Sisi completed a crucial step in his career. With his appointment to head of military intelligence, he became one of the most powerful men in the country. He also joined the Supreme Council of the Armed Forces, which tried its hand as an emergency government.

Sisi's rise to power almost ended with his first appearance as a strongman. He had clumsily attempted to justify the "virginity tests," performed by military doctors on female protesters in Tahrir Square. Sisi had described the humiliating tests as a reaction to accusations of rape that had been supposedly leveled at soldiers. The army abandoned the tests after protests, and Sisi disappeared behind the scenes once again.

Can Sisi Save Egypt?

But Mohammed Morsi, a member of the Muslim Brotherhood, swiftly appointed Sisi as the new commander-in-chief of the armed forces after he won the first free presidential election in Egypt's history. He followed up soon after by tapping him as defense minister. The appointment triggered speculation over Sisi's sympathies. At the time, many implied that the devout military man was secretly a member of the Muslim Brotherhood. As evidence, they pointed to Sisi's wife, who wore a face veil that covered everything but the eyes. At the time, no one would have thought it possible that Sisi would depose Morsi less than a year later.

After the "second revolution," as Sisi calls the overthrow, the general initially remained in the background. An interim government managed the country's official business, and Sisi rejected the idea of campaigning for the office of president. But like many things in the Sisi's life until then, the presidential election came to him -- as if Sisi, ever the strategist, had planned his rise to the country's highest office like a military campaign. The only opposing candidate, left-wing populist Hamdin Sabahi, was a fig leaf. With about 736,000 votes, Sabahi captured less than three percent of the vote.

For this week's issue, SPIEGEL conducted an extensive interview with Sisi. The talk took place in the sand-colored presidential palace in the Heliopolis district, where the streets are a little wider and the air isn't quite as polluted as in most other parts of Cairo, a giant city of 12 million people. The extensive grounds are surrounded by a wall that is at least five meters (16 feet) high. Although Sisi is on the Islamists' death lists, his residence is near major roads. Visitors are subjected to rigorous inspection, and mobile phones and recording devices are not allowed inside the presidential palace. The noise and filth of Cairo are quickly forgotten in the landscaped gardens behind the walls.

Belgian architect Ernest Jaspar, who designed the complex more than 100 years ago, intended it as a small paradise, complete with the most luxurious hotel in the world, or at least in the Middle East. He created a 500-room structure with ballrooms and dining rooms, intended as a hotel for foreign tourists, and a narrow-gauge railroad was built to service the complex. Jaspar placed a 55-meter cupola over the lobby, which is reminiscent of St. Peter's Basilica in Rome. The palace was filled with materials and objects that symbolized luxury: marble, mahogany, crystal chandeliers and Persian rugs.

Sisi, who has given almost no interviews to date, wanted to take this opportunity to explain himself. He knows that there are differing views of his takeover. Most Egyptians and, of course, Sisi himself, believe that he fulfilled the will of the people, and that dilettantish Islamist Morsi would have ruined the country beyond recovery. But the prevailing view in the West is that election results must be respected, even if the wrong people win an election.

Paintings of historic ships hang on the walls of his office, and there is a briefcase on the floor. Sisi, 60 and 1.66 meters (5'4") tall, is sitting in a chair with a gilded armrest. For two hours and 20 minutes, his legs remain immobile, and he doesn't touch his water or tea. He speaks calmly and impassively, and he seems free of anxiety, like a man who seriously believes he can save Cairo and Egypt. 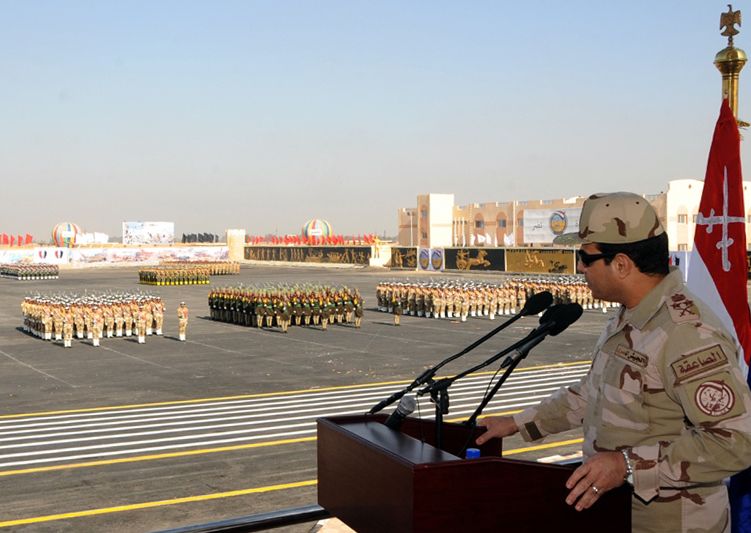 Egyptian President Abdel Fattah al-Sisi is seen here during his term as Defense Minister in 2013.