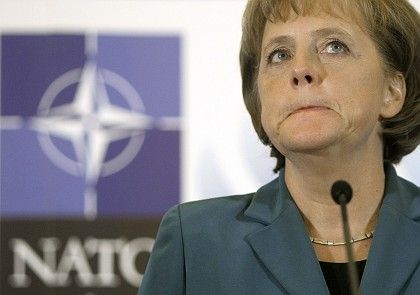 Around 40 presidents, prime ministers as well as hordes from foreign and defense ministries and around 3,000 advisors, secretaries and other officials were all smiles during the three-day NATO summit in Bucharest.

Optimistic about the state of the world, safe in the embrace of the happy NATO family, Angela Merkel, George W. Bush and friends almost seemed happily reenergized by the policy wrangling in the luxury palace in Bucharest. Symbolically it was the German chancellor who set the final tone. "I am very satisfied as I go home," she said before leaving for the airport.

At the very least, the much feared open row between the alliance partners had been avoided. And the dream of the outgoing US president of seeing the most powerful military alliance in the world enlarged was fulfilled -- at least partially. Croatia and Albania can now snuggle up under the NATO security blanket. And Macedonia should be able to join them as soon as its bizarre dispute with neighboring Greece over its name is put to rest.

But that was about it. All the other important decisions were postponed -- yet again. The allies didnt even dare begin the urgent discussions about strategies and plans. They were afraid that by doing so they would no longer be able to conceal the deep division that cuts right across the defense alliance. The old common enemy -- a Soviet-dominated Eastern Block -- is gone, having done away with itself. And NATO has so far not been able to agree on a new enemy. Is it to become the world's policeman now, or should it remain a self-defense pact?

The dispute over new members, the wrangling over communiqués and empty formulations cannot hide the true vacuum at the core of the ever-growing alliance. Instead of just talking about expansion, NATO needs a new concept, a justification for its existence, a guiding vision behind which all members can gather. "The Cold War is over," President Bush told his Russian colleagues on Friday. But what should follow on from that bipolar confrontation and the post-9/11 era is yet to be discussed.

There are completely different conceptions of who is protecting whom against whom and by what means. The alliance is militarily bigger and more powerful than ever -- yet politically weaker than it has ever been. There is a deep rift when it comes to all the important questions: On the one side the Americans and their friends in Eastern Europe, on the other the Germans, the French and their neighbors -- "Old Europe," in other words. And in the vain attempt to prevent these differences coming to the fore, the members in Bucharest preferred to postpone all important questions until the next summit. 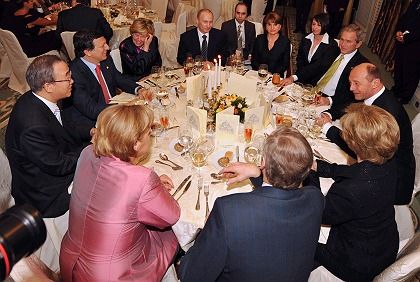 A typical example was the dispute over whether to accept Georgia and Ukraine as members. While the new members from Eastern Europe, backed up by the US, wanted to set the two countries on the path to NATO membership, Western Europe was opposed.

Such a move would be, in the words of one French diplomat, "complete nonsense." The majority of Ukrainians dont want to join NATO. And as for Georgia, apart from its democratic deficits, its two territorial disputes with Russia, over Abkhazia and South Ossetia, would be a heavy burden for the alliance, particularly when it comes to its relationship with Moscow.

It was Russia that dominated the meeting in Bucharest. Yet when outgoing President Vladmir Putin arrived in Romania on the last day of the summit, no one really wanted to debate with him. The alliance was happy to accept his gift of allowing NATO supplies to be transported through Russian territory. Yet no one wanted to mention the difficult topics of the US's planned missile defense system or Russia's outspokenness on the issues of Georgia and Ukraine -- after all, Bush and Putin are going to speak fully about this at their meeting on Sunday.

NATO Secretary-General Jaap de Hoop Scheffer had always maintained that the summit in Romania would "hopefully send a strong signal" regarding a "new strategic concept" for NATO. He said the alliance needed a new concept for the fight against the Taliban and terror around the globe. And that is true. The present strategies were last adjusted in 1999 -- long before the terror attacks of Sept 11, 2001. Nevertheless, that fundamental discussion did not take place.

Postpone, adjourn and just don't argue -- this was the motto followed in Bucharest once again. And now that the summit is over, all eyes are on the next big event, the one that will be held jointly by Germany and France in Strasbourg and Kehl. However it looks highly unlikely that the essential discussions will take place there either -- the occasion is the 60th anniversary of the alliance and will be marked by huge celebrations.

Several members have already rejected the idea of having an extra working summit parallel to the anniversary bash -- after all, why debate when you can simply party?