An eerie quiet has descended on the world's factory, especially in places where machines are suddenly at a standstill. In Dongguan in southern China's Pearl River Delta, hundreds of workers from the bankrupt Weixu shoe factory march silently through the city, causing traffic jams on wide streets usually crowded with a constant stream of heavily loaded trucks.

Dongguan is an important motor in the Chinese export machine. The city, not far from Hong Kong, is home to row after row of low-wage factories. The streets are normally empty during the day. At Weixu, for example, migrant workers lived in dormitories directly on the factory grounds, crowded into small, multiple-occupancy rooms.

But now the drudges are out in public, staging street demonstrations somewhere in Dongguan almost every day. Many factories are running out of money and work now that China's consumers in Europe and the United States are buying less.

The 2,000 Weixu workers do not carry protest signs or use whistles. China does not permit unions that could organize the protests. The men and women, many of them looking young enough to be teenagers, are driven by rage, demanding wages which haven't been paid in months. Their boss, a Taiwanese, fled the city at night.

One worker, who calls herself "Little Li," affixed shoe-size labels to boxes until recently. One day at noon, as she reports, she and other workers overheard suppliers at the factory gate loudly demanding payment for their goods. "We stopped work immediately," she says.

By working overtime, which is common, 24-year-old Li earned up to €130 ($172) a month, twice as much as the paltry minimum wage. But now she lacks the money for a rail ticket back to her native Yunnan Province. She is anxious to leave the Pearl Delta region and is pinning her hopes on promises made by the local government to pay each worker.

The woman is in luck. With the Chinese authorities fearing major unrest, municipalities in the region have been paying workers their outstanding wages with a surprising lack of bureaucracy. It is a program that China can easily afford. It has the world's largest foreign currency reserves: about $1.9 trillion (€1.5 trillion).

The crowds jostling at train stations in the Pearl River Delta are almost as thick as they are during the traditional Chinese New Year festival. Migrant workers are returning to rural areas in large numbers, going home to their families to weather the crisis by growing crops in their own fields once again.

The global economic crisis is hitting China with such force that the government and party have been completely taken by surprise and are increasingly overwhelmed. Even though the police are under strict orders not to provoke demonstrators, friction is growing in Dongguan.

At Kaida Toys, a toy factory owned by investors from Hong Kong, 500 angry workers stormed the administration building last week, smashing windows and computers. Then the crowd tangled with about 1,000 police officers, even turning over squad cars.

More and more protests are flaring up around the country. In the capital Beijing, angry workers picketed the corporate headquarters of liquor-maker China Resources, holding signs demanding the payment of their outstanding wages. Taxi drivers went on strike in Chongqing and other cities.

The protests may be just the beginning. The People's Republic of China, whose economy grew at an astonishing 11.9 percent in 2007, is suddenly feeling the extreme extent to which it depends on the global economy.

Until recently, many Chinese economic experts took a completely different view of the situation. Encouraged by Western economists, they believed that China was in the process of economically "decoupling" itself from the West. 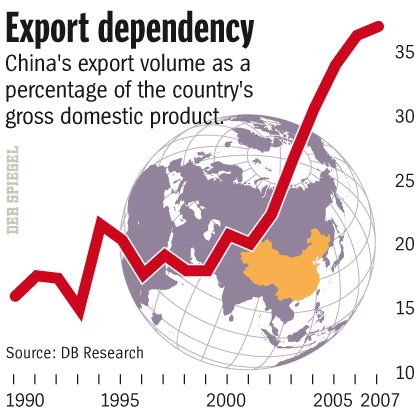 Sounding almost generous, Prime Minister Wen Jiabao noted that China's greatest contribution to the world will continue growing strongly and smoothly. But he failed to explain how that will happen if the main buyers of Chinese mass-produced goods, most of all the United States, are ailing.

Meanwhile, "Grandpa Wen," as the Chinese call their premier, is traveling hastily through the country, and he is apparently horrified by what he sees. "Factors that harm social stability will increase," he warned in the party publication Qiushi (Seeking Truth).

In the past, Wen and his Communist Party strategists viewed growth of eight percent as a magical minimum to preserve social stability and, with it, party control. But last week the World Bank announced its forecast of only 7.5 percent growth for China next year.

It sounds like a lot -- by Western standards. The economies of the major industrialized countries can only dream of such growth rates, even during economic booms. But it is not a lot, given the double-digit growth rates of the last five years and the country's problems. For this reason, the Chinese government is determined to take decisive counter-measures. It plans to invest about €450 billion ($563 billion) in new projects, including bridges, railways and airports, to stimulate flagging growth.

It will be nearly impossible to verify how much of this giant sum China ends up spending. But the party's principal aim is to broadcast a calming message, which President Hu Jintao announced to the world in time for the G-20 summit in Washington: Look at us, we have the situation under control.

Symbols of confidence are in demand. Local officials in Shanghai unveiled plans for a new skyscraper last week. The bold design is modeled on the image of a dragon, and at 632 meters (2,073 feet) it will be China's tallest building. It will tower over the World Financial Center, which recently opened in Shanghai and, as a result of the crisis, remains half-empty.

Things could get a lot worse, economists at the People's University in Beijing warned in a recent report. The Chinese economy, they wrote, will adjust to the new environment by progressing as unevenly as the letter "W," with growth declining next year to a greater extent than feared, a slight recovery in 2010 and another sharp decline after that.

Beijing, anxious to avert this horrific scenario, announces new economic stimulus measures almost daily. Last Wednesday, the central bank reduced interest rates by more than one percentage point for the fourth time in a row. China has not taken such radical action since the 1997 Asian financial crisis.

China's current economic policy is looking like a roller-coaster ride. Beijing raised interest rates several times until this spring, hoping to curb inflation. Prices were stimulated by raising the exchange rate of the yuan to the dollar, as well as by rising costs of raw materials and food. But no one mentions inflation these days. In fact, the world's factory is now trembling at the prospect of deflation, or a consistent decline in prices.

Premier Wen's crisis managers are fighting on several fronts. Even before the global financial crisis, they did their best to prevent a loud popping of the country's overinflated economic bubble.

This led to a decline in prices on the Shanghai Stock Exchange by more than half, and a sharp drop in the real estate market.

Wen and his team are also faced with an enormous structural challenge. Three decades after the legendary reformer Deng Xiaoping opened up the People's Republic to capitalism with his reform policies, the Chinese low-cost factory appears to have reached the end of its useful life. The strategists in Beijing sense that a system in which China produces obsessively and the rest of the world does little more than consume cannot function in the long term.

To address this new reality, planners in Beijing have cautiously begun to lift their country to the level of a high-tech nation. With a more stringent labor law, and by temporarily repealing export tax rebates and imposing stricter environmental protection requirements, the government was partly responsible for the shuttering of about 67,000 low-cost factories in the Pearl River Delta, including shoe and textile plants. Some operations moved to countries where costs are even lower, like Vietnam and Bangladesh.

But then change came far more rapidly than planned. First, a devastating snowstorm wreaked havoc on the government's industrial policy plans, and then there was the earthquake in Sichuan Province. Finally, there were the Olympic Games.

The Olympics were suppoed to give a powerful boost to China's continued industrial ascent. Japan and South Korea had seen booms after their respective Olympics, in 1964 and 1988. But in China the Games actually curbed growth. To keep the skies blue over Beijing, authorities ordered countless factories in northern China to be closed weeks before the Games began. And, fearing terrorist attacks, they banned the transport of chemicals and other hazardous goods. Many companies still have not recovered from the temporary shutdown.

The world financial crisis, which now threatens to expand into a global recession, is taking care of the rest.

China is far from being in an actual recession -- that is, a shrinking economy. Nevertheless, the country must provide new jobs for an additional 10 million migrant workers flooding into the major cities each year.

To offset declining demand from abroad, Beijing is now trying to stimulate domestic consumption, as the Communist Party eyes the country's 800 million farmers as potential new consumers. It plans to allow farmers greater control over the government-owned land they farm. But private consumption, which now contributes to only 40 percent of China's gross domestic product, cannotbe created by fiat. Beijing will have to improve the social welfare system to encourage the Chinese to spend more and save less. Most rural residents have neither health insurance nor retirement pensions.

The current crisis is also likely to intensify trade tensions between the world's factory and its biggest customers, the European Union and the United States. In October, China's trade surplus climbed to a record $35 billion, mostly because China, as a result of the crisis, imported drastically fewer goods than in the previous month. There is plenty of material for bilateral talks, and yet Beijing, angry over French President Nicolas Sarkozy's plans to meet with the Dalai Lama, called off its summit with the EU in Lyon that had been planned for this Monday.

Despite the crisis, China remains undeterred in pursuing its global ambitions. In the presence of President Hu, the heads of the state-owned Chinese shipping company, Cosco, signed an agreement with Greece last week. Cosco plans to build its own container terminal at the Athens port of Piraeus -- as a strategic launching pad for Chinese trade with Eastern Europe.