Zionists have never liked Jerusalem. Theodor Herzl, the father of Zionism, dreamed of a capital city in the north of the country, on the slopes of the Carmel Mountains overlooking the Mediterranean. He had nothing but disdain for the Western Wall in Jerusalem, once writing: "What superstition and fanaticism on every side!"

It's a shame that the Zionists didn't get their way. Because ever since Israel declared Jerusalem to be its capital almost 70 years ago, the city's status has been the subject of conflict. And U.S. President Donald Trump poured a large bucket of oil on the flames of that conflict on Wednesday by announcing that the United States was formally recognizing Jerusalem as Israel's capital and would be moving the U.S. Embassy to the city from its current location in Tel Aviv.

Jerusalem, of course, is already the seat of the Knesset, Israel's parliament, and is also where Prime Minister Benjamin Netanyahu is headquartered and where most of the ministries are located. Yet no country had seen fit to locate its embassy there because the international community, in unusual unanimity, had agreed that the question regarding Israel's capital should be solved within the framework of an official peace agreement. The Palestinians, after all, also see Jerusalem as their capital, at least the Arab eastern part of the city, and they make up approximately a third of the city's population. The Jerusalem question is one of the most complicated issues facing the peace process, which explains why it has been left out of peace plans to date.

Now, though, Donald Trump has put the cart before the horse and recognized Jerusalem - because he promised to do so in his election campaign. It is a dumb move. And it shows that Trump is the very opposite of a "deal maker." He handed Netanyahu a long-coveted gift without asking anything in return. That Trump then claimed that the recognition is "a necessary condition for achieving peace" is a clear demonstration of this president's hubris. He believes that only by trampling all that has come before can something new be created. But the peace process, as unrealistic as it may always have been, is now a virtual impossibility - no matter how loudly Trump claims that he wants a "great deal" for both sides.

The move, after all, disqualifies the United States as a mediator. And Israel, which has long demonstrated a reluctance to make any compromises at all, will feel empowered to continue ignoring demands to yield. Netanyahu's government has anyway shown a preference for creating facts on the ground, continuing to build settlements and hiding the Palestinians behind colorfully painted walls. And the Palestinians anyway have the feeling that they will emerge as the losers in the end. The purported peace plan developed by Trump's son-in-law Jared Kushner, for example, is said not to contain their most important demands. Why continue negotiating?

But Trump's decision hasn't just stirred things up in Israel and the Palestinian Territories, that tiny speck of land the size of Belgium, but all across the Arab world. From Egypt to Jordan, heads of state have expressed their indignation while Turkish President Recep Tayyip Erdogan went so far as to say that America was "plunging the region and the world into a fire with no end in sight." That might be a bit theatrical, but blood has already been shed in protests and rockets have been fired from the Gaza Strip.

Trump's decision will produce only losers. The U.S. is one of them, having now sacrificed even more credibility in the Middle East. The anti-Iran alliance between Israel, Saudi Arabia and Egypt could now disintegrate - at a time when yet another political amateur, the crown prince of Saudi Arabia, is shaking up the region with his war in Yemen, the blockade of Qatar and the downright thuggish attempt to topple the Lebanese prime minister.

Even the Israelis, who are now celebrating, could ultimately find themselves among the losers of this decision. And it's not just because this conflict has always served to empower the radicals. Rather, Trump's decision could end up estranging Israel from Europe even further.

Israeli officials speak frequently these days of similarities with Europe, emphasizing values, culture and economy. Why do the Europeans constantly insist on the Palestinian question, they wonder? It is, they insist, a minor matter. That, though, couldn't be further from the truth. It is a question of political values and therefore, a solution to the Palestinian question is central to the EU-Israel relationship. And Trump's decision makes such a solution that much more difficult, pushing European and Israelis even farther apart. And it allows the deepest wound in the relationship between the West and the Arab world to continue festering.

Thanks to Trump, it should now be clear to everyone that the peace process is little more than an empty phrase and isn't working anymore. And that the relative quiet in the Israeli-Palestinian relationship we have seen recently is more the exception than the rule.

That means that it is now up to us - the Europeans, the Germans - to come up with new ideas and new formats, as difficult as that may be. Wherever possible, those new ideas should be developed in cooperation with moderate Arab countries, those which know that the old animosity toward Israel hurts more than it helps. For German Foreign Minister Sigmar Gabriel, who has been demanding that Germany be more courageous on foreign policy, the new situation in the Middle East presents a perfect opportunity. No other conflict should be as important to Europe as the one between the Israelis and the Palestinians. 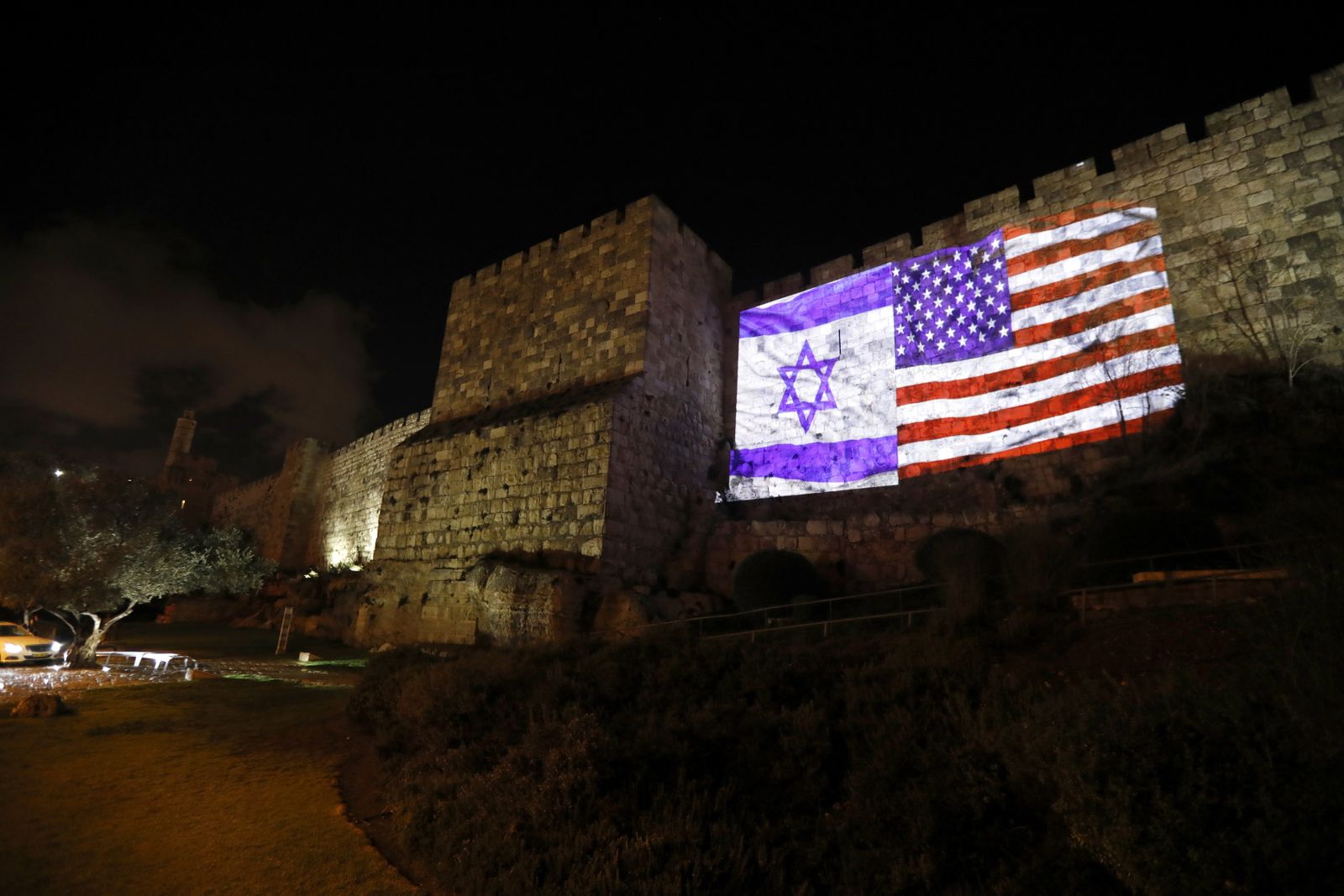 Israeli and U.S. flags projected onto the wall of Jerusalem's Old City.