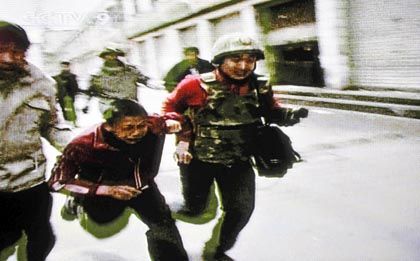 Ma Canrong, the Chinese ambassador to Germany, had an unscheduled appointment in Berlin last Thursday. Ma decided at short notice to visit "berlinLounge," a business networking forum in the German capital.

Standing in front of the assembled entrepreneurs, Ma vented his frustration, which had been mounting over several days. China, he said, was outraged over what it viewed as biased reporting on Tibet. "It is all incorrect," complained the Chinese emissary, expressing his government's profound displeasure.

What Ma chose not to mention, however, is the fact that it is precisely the spin doctors of the Communist Party who have made journalistic reporting so difficult since the Tibetan unrest began. And before making his speech, Ma also insisted -- in what appears to be yet another Chinese media-relations idiosyncrasy -- that all cameras and microphones be removed from the venue. However the diplomat tried to strike a conciliatory note by reassuring his audience that all journalists would be able to "freely report" from China during the Olympic Games.

The impromptu press conference shed some light on China's understanding of freedom of speech. After preventing media correspondents from traveling to Tibet, party functionaries had no qualms about accusing them of presenting a distorted picture of events there. Chinese Foreign Ministry spokesman Qin Gang said that the international community must change its approach and "make a clear distinction between ... right and wrong." Just how that is supposed to happen -- given the mere trickle of verifiable information -- Qin didn't say, but both Qin and Ma have made it clear that China sees the crisis in Tibet primarily as a battle of perspectives and convictions. Ultimately the future world power is worried about its image.

Making Do or Manipulating?

Controlling all media coverage of events in the troubled western part of the country has become just as important to the rulers in Beijing as cracking down on local revolts there. In this respect, preventing foreign reporters from doing their job has been highly effective. Journalists have had to make do with a large number of hard-to-confirm facts and ambiguous images, which automatically increases the risk of making mistakes and errors. This, in turn, has also made it easier for the Chinese authorities to accuse them of manipulation. 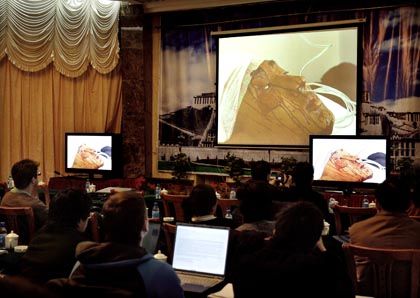 For example, the Chinese scoff at a photo distributed by the French news agency AFP of a boy who can be seen running with security forces on the streets of Lhasa, the Tibetan capital. In the West it quickly became a symbol of the crackdown on protesters.

Beijing's version of events, though, looks very different. Chinese authorities maintain that the photo -- in reality, a screenshot from a Chinese TV broadcast -- merely shows officers escorting an individual to safety and is by no means an arrest, as was reported in a number of publications, including SPIEGEL.

From their own media, the Chinese only hear about how things in Tibet are going better than ever now and how the dark days are behind them. Otherwise, there is not a shadow of a doubt, no searching for errors in previous policies, no new strategies on how Tibetans and the Han Chinese majority can coexist more peaceably.

After some initial hesitation, the authorities are now brutally suppressing all unrest in the Tibetan province. Everyone knows that much, but that is also the only thing they know for certain. How many have died? At least 140, say Tibetan exiles, whereas Beijing puts the number near 20. As for on-the-spot reporting, it was not until nearly two weeks after the protests erupted that journalists were finally allowed -- under supervision -- to travel to Lhasa. Last Friday, foreign diplomats were let in, too.

Under such conditions, human rights activists like Kai Müller, who runs the Berlin office of the non-profit advocacy group the International Campaign for Tibet (ICT), are placing a greater emphasis on information obtained through phone calls between exiles and their relatives still in Tibet. His organization attempts "to have every important piece of information confirmed by another source." However, this only works if such research does not endanger anyone -- an unsatisfactory situation.

Virtually no other oppressed people has a lobby like the Tibetans do. There are advocacy groups in 44 countries, including locations as far-flung as Colombia and Albania. In Beijing, these friends of Tibet are seen as the fifth column of anti-Chinese countries, particularly since the majority -- at least 63 -- of these committees are located in the US, where they could arguably be exploited for political ends. Time and again, says the ICT's Müller, Tibetan activists receive e-mails contaminated with Trojan horses and viruses -- Beijing is apparently even cracking down on the Dalai Lama's supporters in cyberspace.

With meticulous detail, Chinese bloggers on Web sites like Anti-CNN.com have set out to prove that foreign media are spreading lies. Occasionally, they even find proof. For example, footage of police beating protesters in Nepal was used for a televised report about Lhasa.

The bloggers believe there are too many such instances for them to be honest mistakes: "Some countries and people don't want us to be happy and strong," wrote one.