Libyan leader Moammar Gadhafi and Israeli Vice Prime Minister Silvan Shalom don't have all that much in common, but they do share one thing: Neither thinks much of the revolution in Tunisia.

"I fear that we now stand before a new and very critical phase in the Arab world," Shalom, who was himself born in Tunisia in 1958, said in an interview aired on Israeli radio on Jan. 14. Israel and the majority of its Arab neighbors now agree on the importance of fighting Islamic fundamentalism, Shalom said. His concern lies with what might happen if Arab states start becoming democratic. He fears Tunisia might "set a precedent that could be repeated in other countries, possibly affecting directly the stability of our system." If democratic governments take over Israel's neighboring states, the vice prime minister said, the days of the Arab-Israeli security alliance will be over.

Gadhafi also complained that he was "very pained" to see his friend Zine El Abidine Ben Ali's regime collapse and Tunisia descend into fear and insecurity. "What is this for?" he asked. "To change Zine El Abidine? Hasn't he told you he would step down after three years? Be patient for three years and your son stays alive."

The revolution in the Maghreb presents a difficult dilemma not only to Tunisia's neighbors, but also to Europe, the United States and Israel. Indeed, the dilemma embodies the central question of Middle Eastern politics in general: Which is more important -- democracy or stability?

Last Wednesday, when Arab leaders gathered in Egyptian Red Sea resort city Sharm el-Sheikh, for the Arab economic summit, it was the first time Tunisian dictator Ben Ali was missing from their ranks. The summit's hosts tried in vain to steer the conversation away from the unprecedented events in Tunisia. "The Tunisian revolution is not far from us," Arab League leader Amr Moussa said in his opening remarks for the conference. "The Arab citizen entered an unprecedented state of anger and frustration," he added, noting that "the Arab soul is broken by poverty, unemployment and general recession."

Speaking after Moussa, Egyptian President Hosni Mubarak didn't even mention Tunisia, preferring instead to address the importance of economic cooperation, which he called a "requirement for national security." It was a bold denial of the reality that Moussa had just clearly described. After all, the conditions in Tunisia also apply to most of the other 21 Arab states and the Palestinian territories -- and sometimes even much more so.

The populations of these countries are young and unhappy. Indeed, 53.4 percent -- or roughly 190 million out of a current population of 352 million Arabs -- are younger than 24 years old, and nearly three-quarters of them are unemployed. In many cases, the education these young people receive doesn't do them any good because there are no jobs in the fields they trained for. Many are 35 or even 40 before they can afford to marry. In essence, this is a violation of a basic human right perpetrated against millions in countries such as Egypt, where life expectancy is nine years less than it is in Germany, or in Yemen, where the figure is almost 15 years lower.

Governments in these countries, on the other hand, are corrupt and outdated. Indeed, before Ben Ali's ouster, the leaders of North Africa's five countries had enjoyed a combined total of 115 years in office. The countries' youth ministers are generally old men.

In countries such as Algeria, Tunisia, Libya and Egypt, demographics, governments run by old men and widespread malaise are forming a dangerous mix. Although it is aware of the situation, the West continues to support the old rulers.

A Problem throughout North Africa

Take the example of Algeria. In recent weeks, Tunisia's western neighbor has seen riots like those in Tunisia. According to a 2008 report from the US Embassy in Algiers that was leaked to the Wikileaks website, the US State Department considers the Algerian government "fragile" and riddled with "unprecedented levels of corruption." Likewise, Abdelaziz Bouteflika, the country's 73-year-old president, is "isolated" and has lost touch with reality. According to the document, Bouteflika is trying to groom his brother Said, around 20 years his junior, to be his successor. The country, one source cited in the document said, is "sitting on a volcano" and its young men feel "grim" and only left with a choice "between death at sea and a slow, gradual death at home."

Another embassy cable is entitled "The Harraga: Give Me Dignity or Give Me Death" after the name for would-be illegal emigrants trying to escape across the Mediterranean. It reports that refugee boats set off from the port city of Annaba each week "filled with a cross-section of frustrated young Algerians -- doctors, lawyers, dropouts, the unemployed." Even members of the country's elite are fleeing. "The grandson of former president Chadli Bendjedid, 29-year-old Mourad Bendjedid, left on Feb. 8, 2007 along with six other young men and has not been heard from since."

American diplomats sent similar reports from Morocco. There, dozens of college graduates camped out in the hopes of being hired as civil servants, people who'd given up hope began setting themselves on fire three years ago, and "corrupt practices" have "become much more institutionalized" under King Mohammed VI.

Meanwhile, their colleagues in Libya reported that the regime there had things much less under control than it appeared and that Gadhafi found himself in "a downward spiral" after being disgraced by his sons' excesses.

At the same time, American diplomats acknowledge what these and other Arab governments have accomplished in terms of averting terrorist attacks, thwarting Islamists and establishing dynasties that offer stability even if they do not provide democracy that meets Western standards.

Given such conditions, the question arises whether Tunisia is just the beginning of the end of Arab autocracies as well as just how long the populations in countries from Mauritania to Yemen and from Sudan to Syria will continue to put up with the daily humiliations they face at home.

Events of recent days might hint at the answer to these questions. In Mauretania, Algeria and Egypt, 10 men followed the example of Mohammed Bouazizi, the 26-year-old Tunisian fruit vendor whose act of self-immolation after having been humiliated and shooed from the street like a dog triggered his country's revolution.

Thousands have taken to the streets in Jordan and Yemen as well, demanding that their rulers step down. In the wealthy oil emirate Kuwait, which has systematically discriminated against its Bidoon population for decades, the government sent every citizen $3,500 (€2,600) to nip any possible protests in the bud.

There are two aspects of Tunisia's example that give Arab reformers hope. First, it was the Tunisians themselves who got rid of their despot, not a Western army sweeping in with its own "freedom agenda," as the United States did in liberating Iraq from Saddam Hussein in 2003. And, second, it was a grassroots movement that brought about the change of government in Tunisia rather than a highly organized one or an opposition movement co-opted by one charismatic leader, as was the case with the Iranian revolution in 1979. This last point, in particular, has long been viewed by political scientists as a prerequisite for successfully overthrowing a despot in the Middle East.

Nevertheless, most Middle East experts are still hesitant to proclaim the dawning of a new era in the Arab world. As they see it, social, economic and political conditions vary too widely for Tunisia's example to be an indication that a revolutionary spark could affect the entire region.

As much as the West may disapprove of them, these conditions are just as real as the region's demographic imbalance, youth unemployment and official corruption. People in the oil states of Libya and Algeria, for example, are gazing toward Europe just as longingly as people in Tunisia, but their governments enjoy resources they can employ when their systems come under serious threat. Algiers quickly stemmed riots over rising bread prices by simply reducing food prices. And in Egypt, which is much poorer than Tunisia, the circle of people who benefit from the existing system is far larger than that of the Ben Ali clan, with its shamelessly opulent lifestyle.

This holds even more true for Saudi Arabia, which has just as many unemployed, frustrated young people as Tunisia does. The country's deeply conservative monarchy doesn't even pretend to have democratic structures in place. But it still distributes its oil wealth more equitably than the Arab republics that proudly display their elections, parliaments and parties.

Since the Tunisian revolution, poorer Arab princes -- who rely more on large security apparatuses than energy resources -- no longer feel truly secure, and their wealthier counterparts have little faith that this tenuous peace will hold. As a result, meeting last Wednesday in Sharm el-Sheikh, the Gulf's oil monarchs decided to send a signal by pledging a total of $2 billion to governments throughout the Arab world for creating jobs and promoting new businesses.

They care a lot about stability and very little about democracy. And, so far, no one in the West has told them to act any differently.

Correction: SPIEGEL erroneously identified the Bidoon population of Kuwait as Bedouin in the original version of this story. We apologize for the error. 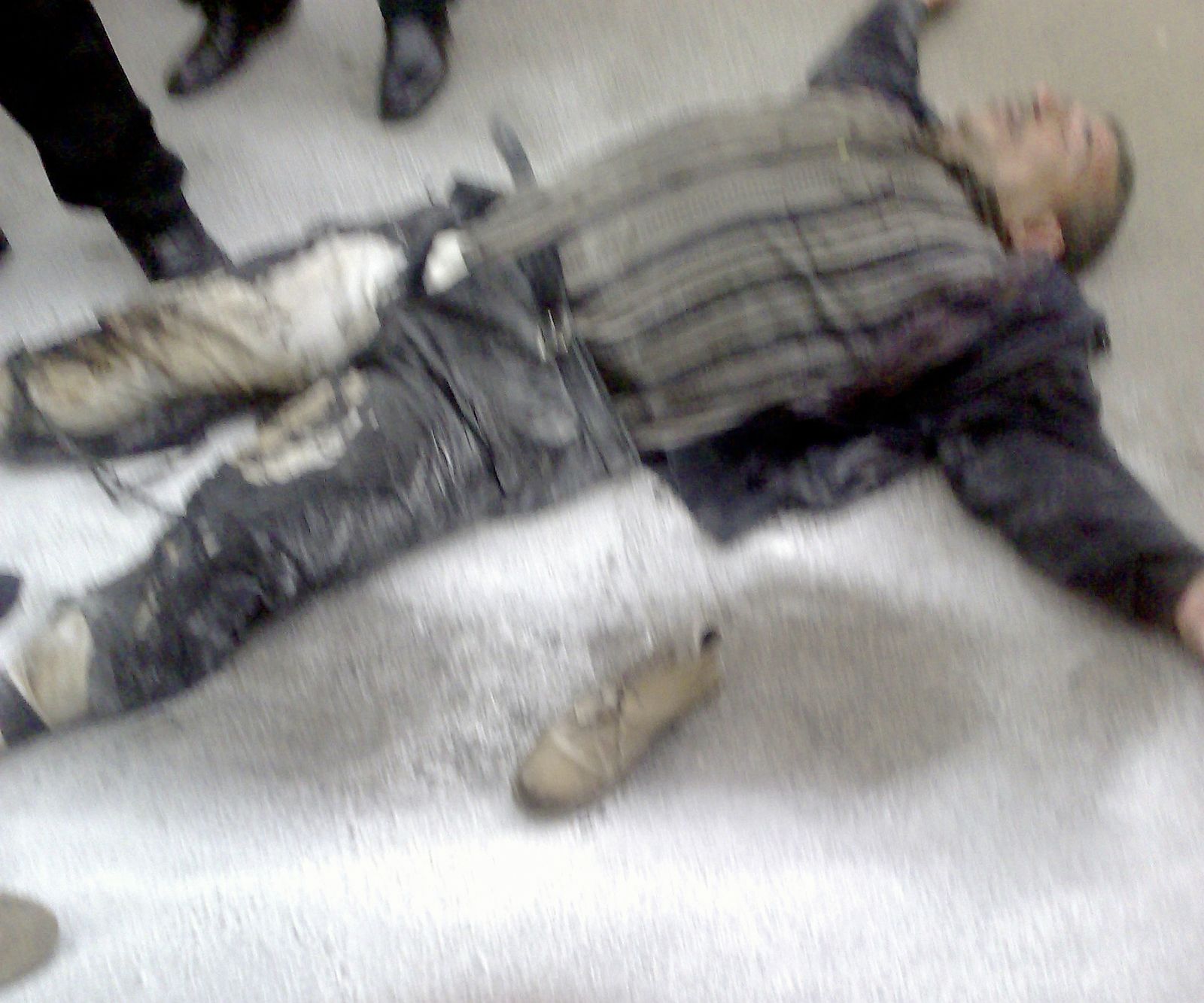 A man attempts to set himself on fire in Cairo: The self-immolation that set off the protests that toppled Tunisia's leader has inspired copycats in other North African states.