Just before 7 a.m. on the day that Tunisians tasted democracy for the first time, the first person in line at the polling station in the chic Tunis district of El Menzah 6 was a princess. Her name is Salwa Bey, an older woman with dyed-blonde hair wearing a gold-colored dress and matching Ray Ban sunglasses.

Her uncle was Tunisia's last monarch, King Mohammed VIII al-Amin, who was a marionette of French colonial power, forced to abdicate when the country achieved independence in 1956.

Half a century later, Salwa Bey was full of emotion as her country took its first tentative steps toward democracy on Sunday. Her hands trembled as she entered the polling station at the Billel elementary school. She presented her identification, and after election officials located her name on their list she dipped her right index finger into a container of ink. She received a sizeable ballot, large enough to accommodate the 116 officially approved parties in the election, and disappeared into a voting booth.

It took her a long time. Afterwards she said that she was so moved by the experience that the letters on the page danced before her eyes. Bey voted for the center-left Ettakatol party, saying she wants nothing to do with the moderate Islamist Ennahda Party, which is expected to emerge the strongest party according to polls. She's worried about women's rights, she said. But more than anything on this day she was emotional, Bey said, adding that her hopes for the future are great.

Behind her thousands of people queued, the line stretching out for hundreds of meters. Women, men, young, old, with headscarves and without -- all of them waited patiently.

It was a historic day for Tunisia. On January 14 this year, the people toppled dictator Zine El Abidine Ben Ali, sparking the wave of revolutions across the region now known as the Arab Spring. The fall of Egypt's dictator Hosni Mubarak, the war in Libya and the rebellion in Syria all followed. But none of these countries have yet come as far as Tunisia. On Sunday the country voted for a constituent assembly that will be tasked with creating both a new constitution and forming a new government.

And the turnout was massive, making for a joyful day of inked fingers and endless queues at polling stations. Many had to wait between one and three hours in the blazing heat, but there were almost no incidents reported. According to Boubker Bethabet, secretary general of the election commission, more than 90 percent of the 4.1 million registered voters -- out of an electorate of 7.5 million -- cast their ballots.

The organization was likewise solid. There were 9,000 polling stations and citizens could send inquiries regarding which one to go to by text message. Meanwhile 150,000 soldiers and police officers were on hand to protect voters, though no large problems were reported.

The leader of the Ennahda party, Rashid al-Ghannushi, also showed up at the same Billel polling station in the El Menzah 6 district where the former monarch's niece voted. Bearded and wearing a sport coat, he was accompanied by his wife, son, three daughters and his entourage. As they approached the polling station, Ghannushi spoke of his once-banned party's martyrs, those who lost their lives under former dictator Zine El Abidine Ben Ali, and how they did not live to experience this day.

"I expect a big victory," Ghannushi said. Last Friday his party held its closing rally in Ben Arous, near Tunis, filling a football stadium with some 20,000 supporters. Polls had shown the Ennahda Party in the lead with some 25 percent of voter approval, and Ghannushi was confident, even speaking of polls that put his party at up to 62 percent of voter support.

But when he and his entourage tried to enter the polling station, the crowd of waiting voters protested angrily, shouting that the era of special privileges ended when Ben Ali was deposed. Ghannushi, who said it was just a misunderstanding, queued up at the back of the line, waiting for two hours before he could finally vote.

The westernized nouveau riche and professionals who characterize the Mensah VI district wanted little to do with the values of the Islamist. "You illiterate!" one man yelled. "Terrorist!" another woman shouted. When Ghannushi left the building after casting his vote, a chorus of voices shouted: "Go on, get lost!" It was one of the rare moments in which it became clear that the day was also about a cultural battle between those who want a Western-style government and those who would prefer Islamist rule, between the elite and the ordinary population.

On Sunday, the elite voted in the wealthy suburb of La Marsa, where the Tunisian aristocracy keep their villas, often living part-time in Paris. Here, too, at the Taieb Mhiri school, the voting lines were hundreds of meters long. This is where the head of the Progressive Democratic Party (PDP), Ahmed Néjib Chebbi, cast his ballot. His party sees itself as the counter model to the popular Ennahda Party. The PDP's opponents, however, accuse them of gathering support from members of the old regime.

Chebbi is a cleanly shaved, thin, almost bald man, who always wears a suit and tie. He was warmly greeted by people wearing Western-style clothes. A well-known radio presenter was among them, as was Tunisia's most famous women's rights advocate. She complained to him that more women have been wearing Hijabs since the revolution.

Not far away, at the Ben Achour school, another centrist politician arrived. Mustafa Ben Jaafar has taken a reconciliatory position, calling for a government that forges national unity. One woman shouted out a demand. "It is essential that you cut the departure tax at the airport, our children study abroad," she said. His response: "To be honest, there are many poor people in this country who face far bigger problems."

It is not the people from La Marsa who toppled Ben Ali. Rather it was the young men from one of Tunis's poorest neighborhoods Cité Tathamoun. Aged between 18 and 24, most of these men are unemployed. They wear shorts and sandals and like to show off their scars from their fights with police in January.

They are frustrated because nothing has changed in their lives since the revolution: There are still no jobs, still no apartments. Almost all of them said they wanted to vote for Ennahda.

"I want a party which rules with religion in mind," 19-year-old Taher said. His 22-year-old friend Motassar alleged that the current elite are corrupt, just like Ben Ali. An Islam-influenced government would make sure that all Tunisia's citizens were looked after, he said, pointing to Islamist-run Turkey, which has a booming economy. In their neighborhood it was hard to find anyone who planned on voting for any other party, with the exception of a handful who favored human rights activist Moncef Marzouki's centrist Congress for the Republic party. Most people, however, voiced the same preference: Ennahda, the party they expect to provide money and jobs, getting aggressive young people off the streets.

How Strong will the Islamists Be?

Sentiments were similar in the poor provinces, places such as Thala, Kasserine or Sidi Bouzid, where social protests sparked the revolution. But for people living in the interior, democracy is not the top priority. Instead, they want jobs. In fact, many of the young, poor people whose desperation triggered the downfall of Ben Ali didn't vote, lacking faith in politics.

The question is not whether Ennahda will win the election, but just how powerful the Islamists will become. The final election result is expected on Tuesday, when discussions will start on the coalition and the new constitution.

After the polls closed on Sunday, the results were already becoming clear, though. In the evening at the different headquarters of the left-leaning secular parties the mood vacillated between disillusionment and desperation. Meanwhile Ennahda members were bursting with self-confidence.

On Monday morning, Radio Mosaique FM posted results from polling stations around the country, according to news agency AP, with many showing a solid lead for Ennahda. Other officials with access to results confirmed that the pattern was being seen nationwide. At noon on Monday, Ennahda claimed to have won around 40 percent of the vote, though there are no official results to check such claims against.

Still, Ennahda will in all likelihood have to form a coalition government. This could mean a partnership with human rights activist Moncef Marzouki's centrist Congress for the Republic party, who seemed to be taking second place in many constituencies in Monday's reports. In the past Marzouki has said he would be open to such a coalition. 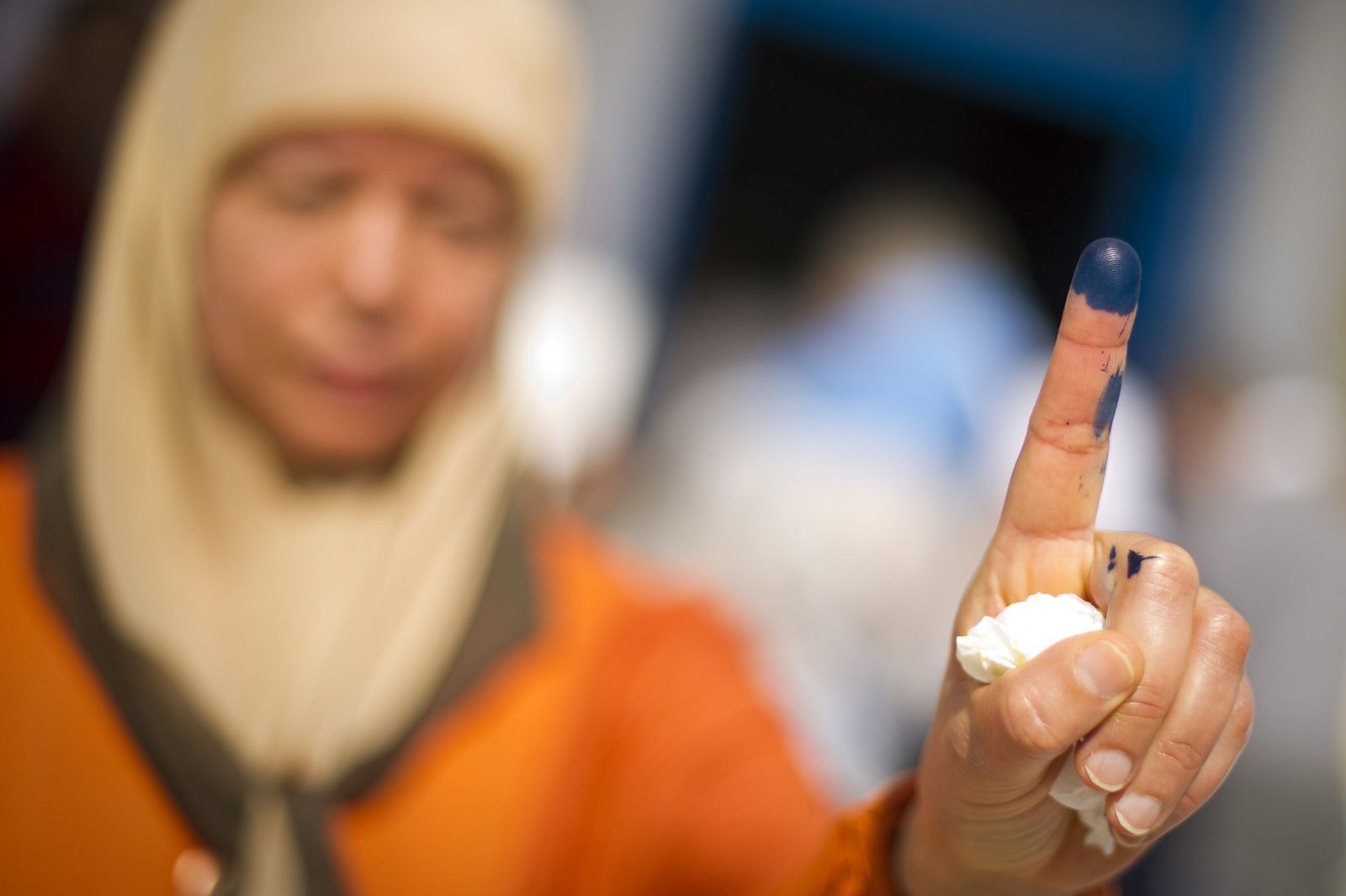 A Tunisian woman showing her ink-stained finger after casting her ballot on Sunday.